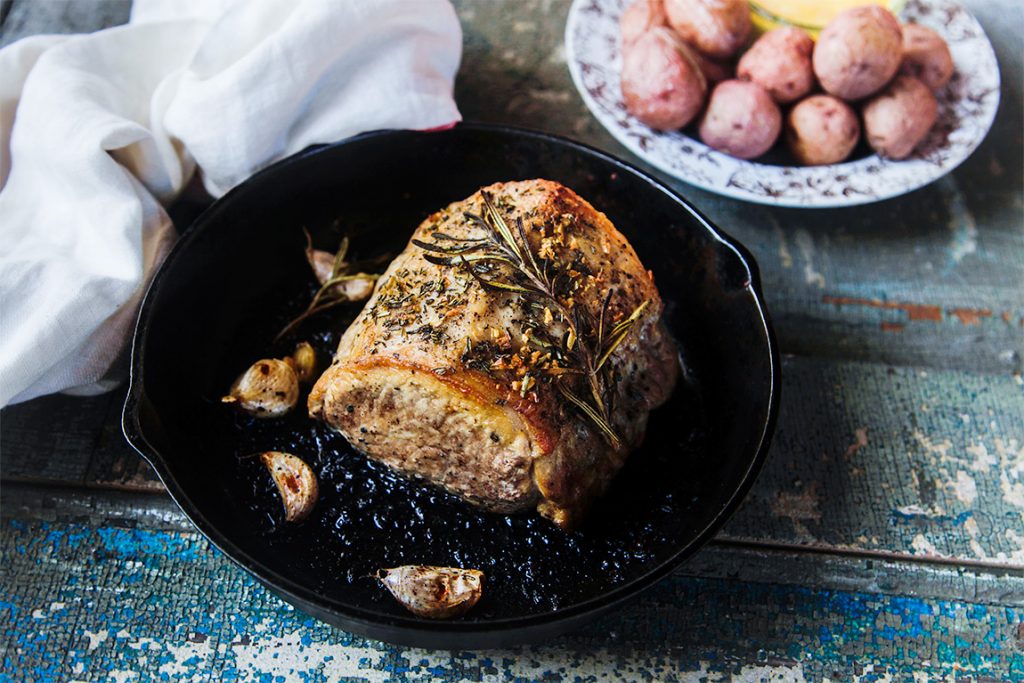 In cooler months a hearty pork roast is the perfect centerpiece to any dinner table. This recipe combines the earthy, herbal aroma of rosemary with the deep bass notes of garlic and a sauce that reminds us why we set aside some of the sweets of summer so they can be enjoyed year-round.

[dropcap letter=”P”]ork loin is a lean cut with only a thin fat cap so overcooking it will result in a dryness that no amount of gravy can redeem. Modern pork production techniques have eliminated the necessity to cook pork “all the way through” and large-muscle cuts such as loins should retain a little pinkness in the center. New guidelines suggest an internal temperature of 145 degrees for safely serving pork.

The sauce for this recipe calls for apricot preserves, but any sweet, summer fruit preserve will do nicely. I’ve used fig, peach, plum and even huckleberry preserves with great success.

As great as these potatoes are, I sadly can’t claim provenance for them. They are my go-to way of cooking red and fingerling potatoes, but I got the recipe from J. Kenji López-Alt of Food Lab fame and his website seriouseats.com. It should be noted that he got the recipe from José Pizarro who got it from the oral tradition of Colombian peasant cooking so my borrowing of the recipe is in keeping with the custom of making great recipes available to the largest possible audience of serious cooks. Despite several failed attempts to modify the recipe to make it “my version” or “better” I have found no way of improvement. Classics are classics for a reason.

Generously season pork on all sides with salt and pepper and sear until lightly browned on all sides.

After searing, turn the loin so that the fat side is on top and season with chopped rosemary and garlic.

Roast in the oven, uncovered for about one hour or until the center of the pork is 140 degrees, as measured with an instant-read thermometer. (The internal temperature of the pork will rise to 145 while resting.)

Transfer the pork to a cutting board, tent with foil and allow to rest for at least 20 minutes while you make the sauce.

Transfer the skillet to the stovetop and deglaze the pan with the chicken stock and wine over medium high heat. Scrape the bottom of the pan with a wooden spoon to release any fond (the brown bits) from the pan.

When the liquid has reduced by one third, add preserves and vinegar and continue reducing until thick enough to coat the back of a spoon.

Reduce the heat to very low and add the butter, stirring quickly until fully incorporated.

Just before serving, slice the roast, transfer to a platter and drizzle with the pan sauce.

Arrange the potatoes in the bottom of a wide saucepan so that they are in a single layer.

Add just enough water to cover the potatoes by ½ inch.

Add the kosher salt evenly around the pan and bring to a boil.

Continue boiling over high/medium high heat until ALL of the water has cooked out of the pan and only the dry salt and potatoes remain.

Remove from heat and give the pan a good shake.

Allow the potatoes to rest in the pan for two additional minutes.