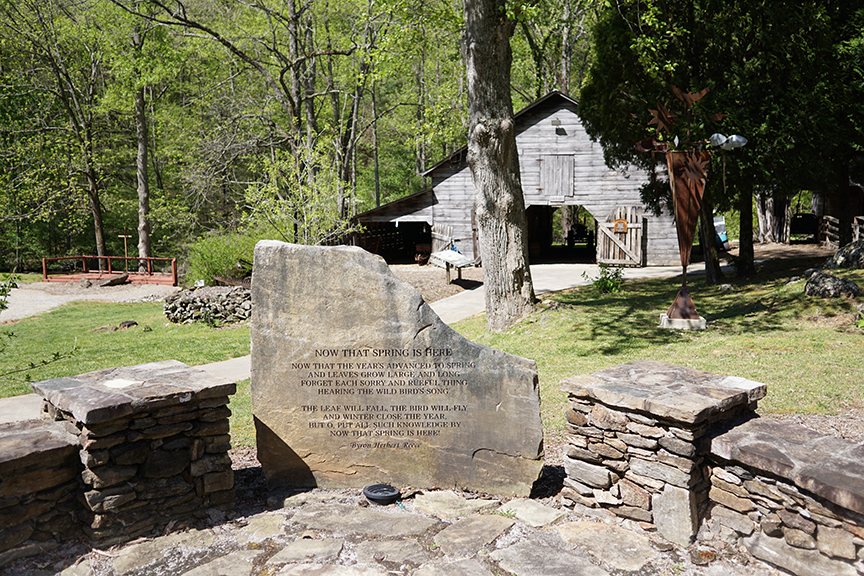 Part poet, part farmer, Bryon Herbert Reece was a riddle to the small mountain community in which he grew up.

Born in 1917 in a one-room cabin on Wolf Creek near Blairsville, Georgia, Reece was destined to be a farmer like his father before him. His family grew potatoes, beans, corn, rye, apples, chickens, milk cows, and hogs on their 25 acres. He was a very bright boy and a voracious reader, reading all of John Bunyan’s Pilgrim’s Progressby the time he started school in 1923. When his parents became ill with tuberculosis, the bulk of the responsibility of keeping the farm going fell on Reece, and as he put it, “The leeway between us and starvation was narrow. I had to farm.”

The repetitive nature of farm tasks gave Reece plenty of space in his head to develop ideas and compose lines of poetry, and after the rest of the family went to bed each night, he would sit up to write down the lines that had come to him while following his plow-mule or mending fence posts. He submitted his finished poems to literary magazines, and his first book of poetry, Ballad of the Bones, was published in 1945 to critical acclaim. By his death in 1958, he had written two novels and four collections of poems—one of which, Bow Down In Jericho, was nominated for a Pulitzer Prize.

In Mountain Singer, Raymond A. Cook chronicles Reece’s life and highlights the tension between his need to provide for his family by farming and his desire to write. He planned his writing life, including teaching responsibilities and stints as Poet in Residence at UCLA, Emory University, and Young Harris College, around the seasons of planting and harvesting on the farm. “Anyone can plow potatoes,” he said, “but nobody is willing to plow mine but me.” Naturally shy and awkward, he struggled with the public appearances that often accompanied book publishing, and he blanched at being treated like a curiosity—the hillbilly poet come to town. He had a drive to write and was disappointed to find that while critics may love one’s work, one can’t make a living as a writer if the books don’t sell. Consequently, financial difficulties forced him to continue farming, cutting further into his writing time. 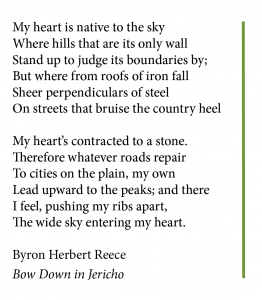 In his lifetime, Reece received two Guggenheim Fellowships, a nomination for a Pulitzer Prize in Poetry, and five Literary Achievement Awards from the Georgia Writers Association, and yet his work is not well known in the American canon. “I often think he was born at the wrong time in terms of getting acclaim,” says Dr. Ruth Looper, an English professor at Young Harris College who teaches Reece’s poetry. “His work was competing against modernists, beat poets, confessional poets. That decade when he was so prolific—1945 to 1955—the acclaimed poets were not using traditional forms…He was so against the grain of what was in critical acclaim those years.” Instead, Reece wrote ballads, lyrical poems, and odes steeped in Biblical imagery and anchored to the land he loved—decidedly square for the time, but evoking a deep sense of place and reverence for nature. Looper explains, “Byron Herbert Reece really wanted to use form and take his readers on a journey that had some sort of meaning.” Had his prime years been in the 1980s and 1990s when the New Formalism Movement brought back an appreciation for tradition and form, his prospects for monetary success might have been different.

Reece was inducted into the Georgia Writers Hall of Fame in 2001, and shortly thereafter, local writers formed the Byron Herbert Reece Society to preserve his legacy. The Reece Farm and Heritage Center, located on Highway 129 near Blairsville, Georgia, pays tribute to both Reece’s writing and the traditional farming practices of the Southern Appalachian Mountains. A self-guided walking tour winds through a poetry garden with his words carved in stone to restored buildings from the Reece family farm including the main barn, springhouse, chicken house, smoke house, and corncrib. Exhibits on Reece’s life and writing along with the Emmy-winning short film, Voices: Finding Byron Herbert Reece, are in the hayloft of the main barn. Chickens, goats, and a friendly donkey greet visitors in the enclosure nearby. The Society renovated and moved the farmhouse Reece shared with his parents to its current location for the visitor’s center.  The acres Reece farmed are now under the lake in Vogel State Park about a mile up the road, and a newly built walking trail connects the state park with the Heritage Center. 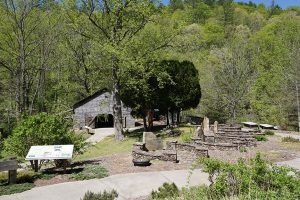 Reece’s struggle with both tuberculosis and a deep loneliness that followed him throughout his life cut his work short when he died by suicide in 1958. Much of Reece’s poetry, on the other hand, is a celebration of his mountain home and the rhythms of the seasons. While our modern lives can cause us to lose feelings of connectedness to people and place as we move more and more online, Reece’s work links us to a different time when our communities were more rooted to the land and each other. With a life finely tuned to the seasons and natural cycles of sowing and reaping, he teaches us to feel those primeval cadences as well. Lively imagery and the playful rhythms of mountain ballads give his mid-twentieth century poetry a fresh and relevant feeling today. Reece deserves to be read more widely. Thanks to the society that bears his name, he will.