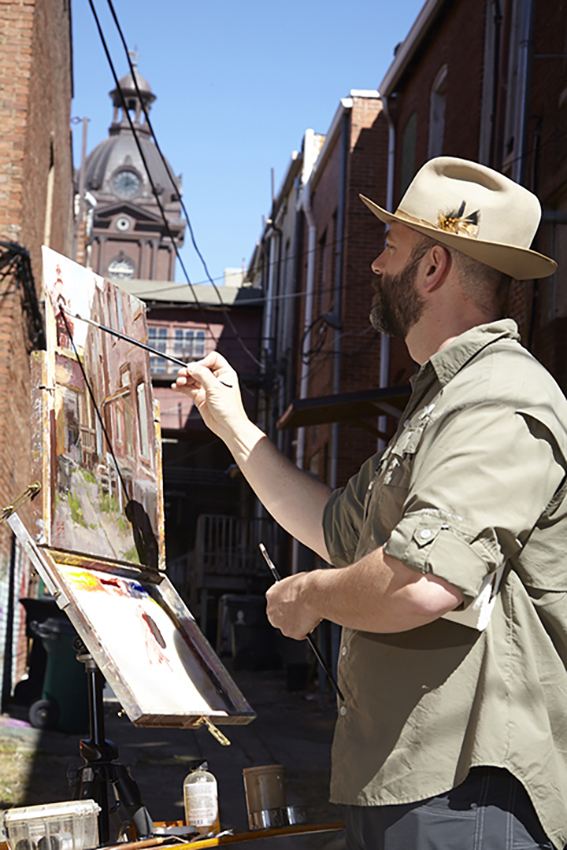 David Boyd knows no strangers in Newnan. Born and raised in this small Georgia town, at a time when the suburbs of Atlanta were still “out in the country”, he could be the official city guide. His easy and affable smile begets a face that loves where he is in life. As he walks down Jefferson Street, people call out to him: “Hey, David!” He’s yelling back and waving as he walks. And, one friend even asks if he’d like a beer from across the street.

With a gait that is more hurried New Yorker than relaxed Southerner, he makes his way up and down streets, pointing out businesses and telling of the people who own them and the histories inside the doors. Boyd is somewhat of a celebrity in Newnan, having come from an “artsy” family. The oldest of three, both of Boyd’s sisters are also in the arts field. And, then there’s his father, David Boyd, Sr., who had a long career as an editorial cartoonist and who also has art “hanging” all over Newnan, with murals and business art gracing the sides of buildings and more. Boyd, Sr. created the logo for the famed Sprayberry’s Barbecue; a spot made even more famous by the late barbecue loving Southern icon, Lewis Grizzard, the beloved and legendary columnist of the Atlanta Journal-Constitution.

Boyd’s father was a hard worker, having also owned a printing business. He told his son that he wanted to be able to run his own life – to not be caught up with having to do what others had needed to do to make it as an artist. He wanted to ultimately be in charge of his own life. It was from this, that Boyd, Jr. learned to appreciate hard work, and the rewards of working for himself.

“Without a doubt, my father influenced my painting,” says Boyd. “He wanted me to find my own path. He had the printing business, so he could avoid syndication; he did his own thing.” Adding that his father loved what he did so much he would often times spend all night working on his editorial cartoons. 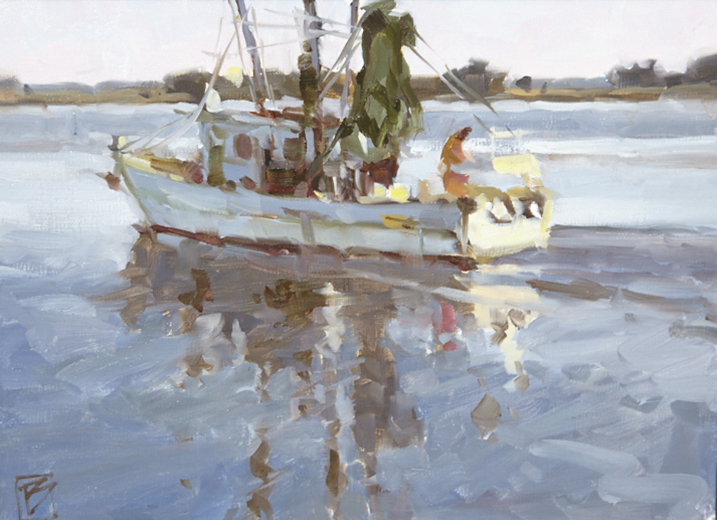 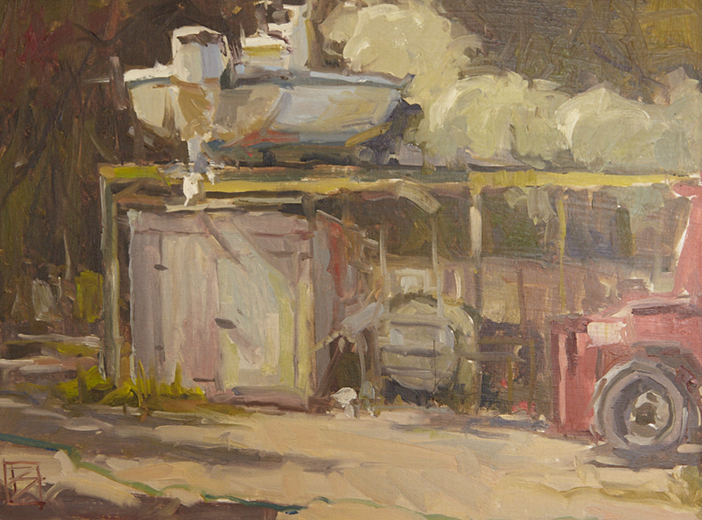 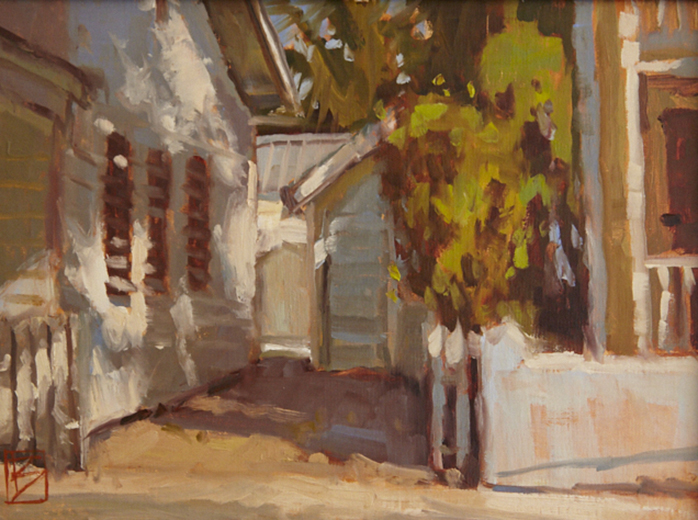 That is this artist’s path right now. In an attempt to be very structured with his work, Boyd sets aside time to work and time to be online. He often puts his phone on silent, so that he can concentrate on his brush strokes, or study the object he is trying to paint.

Studying art history and illustration at Savannah college of Art and Design, he graduated with a BFA in Illustration in 1995. But it wasn’t until 2006 that Boyd began taking his painting seriously. As an art teacher-turned artist, he was lucky. “I taught school for 18 years, and was fortunate enough to be able to come home from teaching and paint for three to four hours a day. But now, I am even more structured and I work hard on refining my paintings.”

So structured in fact, he even uses the television to help keep him focused. “There’s a formula to it all, believe it or not. I like to watch the TV – it helps! I just find a movie I want to watch – and that’s when I know I have two hours to create. I want to be very focused in that amount of time.” There are days where Boyd paints all day, but then there are those spent simply packing and shipping the fruits of his labor. 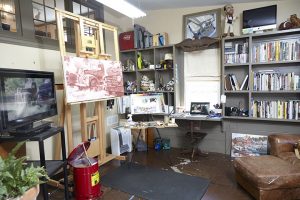 Boyd’s studio is set in the lower part of his house in Newnan. Paint splatters the floor. A large computer monitor displaying an image of a pair of rusted out trucks sits on a table beside an easel holding a canvas he has recently begun of the same trucks. Tubes of paint and a multitude of brushes filling several containers share a shelf with a large paint “glob” that has been added to over a long period of time. Model cars and tractor miniatures are scattered around the studio to be used for reference. Bookshelves surround the room, filled with inspirations and memories. His laptop sits atop his desk filled with the many photographic references he and his wife Julie have accumulated on their travels around the South.

Memories of the times spent in Washington, Ga., with his grandparents are the greatest inspiration for his paintings. “I was fortunate to spend many weekends with my grandparents in rural Georgia, where the woods and old rusty cars and tractors were my playground. Today, when I see the rusting memorabilia of the rural South, I feel a deep sense of nostalgia. Even now I smell the paint and grease.” Remnants of this life are quickly vanishing. says Boyd. “As a nod to my childhood memories as well as the passing of time, I want to preserve Southern American life in its current state of decay… landscapes of rust.”

I had never thought about why I was painting old cars and barns.  But it was the influence of my grandparents, so it turns out, I am painting nostalgia.

Along with teaching art, Boyd also taught golf at the high school level. “I liked golf because it got me away from people,” he explains. “So, when I started painting outdoors, it gave me everything I wanted.”

Boyd explains his great love of plein air painting. “When you stand outside looking at something for hours, it’s the only way you can really see it. I use my plein air work as a way to capture a feeling. I use my camera to record a moment. Back in my studio I like to combine these into large scale paintings of those things I wish I could keep forever… old signs, decaying building, old cars, trucks and tractors, and beautiful rural landscapes.”

En plein air, or simply plein air, is a French term meaning “open (in full) air,” and it’s used to describe the act of painting outdoors, which Boyd does at every chance he is given. Leaving the four walls of the studio behind is a freeing act.

The connection Boyd feels for these nostalgic scenes he paints is apparent by the different elements he obsesses over as he labors over them. He is particularly fond of the urban landscape, finding a place like an alley between buildings to stand and capture with paint and a brush. “I love and think about these small Southern towns and the crumbling infrastructure and I want to paint it all,” says Boyd. “I believe I’ve found myself recording a history no one pays attention to.”

“Walking through an old Southern town or place and being able to admire things like the remains of buildings that have been torn down or left to collapse are especially magical to me.” Boyd remarks. He likes being able to paint these things pretty.

I didn’t make it pretty; I just saw it that way.