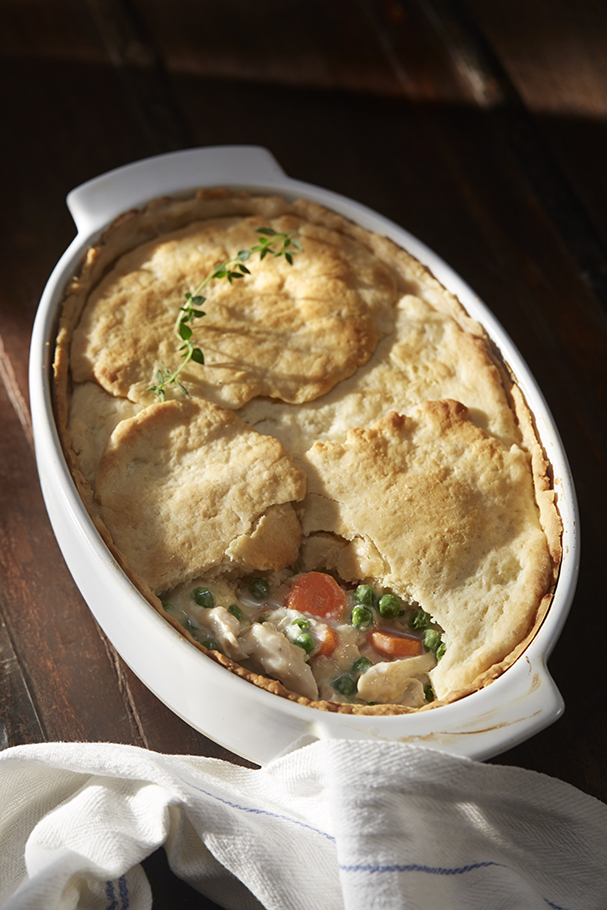 When I moved to New York in 1996, I asked my mother to make me her chicken pot pie. Of all the things Mama cooked, it was my favorite. She made that for me, along with a seven-layer salad.

Everyone’s idea of a seven layer-salad is almost as controversial as everyone’s idea of whether cornbread should contain sugar or not, but I loved my mother’s version.  The dressing for Mama’s seven-layer salad was simply made of mayonnaise and sugar. She didn’t use too much of it, either — just a thin layer beneath the top layer of cheese. This way, she would say, the salad won’t get too soggy as it sits and the dressing makes its way down to the peas, lettuce, bacon, green onions, tomato and cucumber. It stayed crunchy and wonderful, even when you went back for more hours after the meal. As a companion to her chicken pie, it could not be beat.

I convinced myself that these two items would make me happy for the last meal I would have in the South before moving to Brooklyn. As I ate that meal, I was overcome with happiness and emotion.

As I write, I can still smell the rich aroma of her chicken broth, made by simmering a whole chicken, along with carrots, onions, celery, salt and pepper. Simple and wonderful, it was the base for several things my mother made, but mostly she did it for her chicken pies.

She added lemon juice to her crust, which was made with shortening. It was flaky and tender, but held up once she put in the chicken pieces, carrots and peas. The basic roux she made for the creamy part of the pie was amazing. Every bite tasted like home to me, with each flavor combining to melt in my mouth. I felt the love she used to make it.

As I left her house that night, she put something into my hands: her copy of the South Carolina Cook Book, the very volume she used to make my pie with. It was old and red and had all kinds of papers, receipts and lists shoved between the pages. The cover was torn in places, and on the front cover a big area had been damaged by a paper that had gotten wet and stuck to it. Whoever found it like that had tried to pull the paper off and instead, pulled off a piece of the cover. But I didn’t care. It was her kitchen Bible and now she was passing it to me.

As a bonus, she had included a torn piece of notepaper with her handwritten recipe for the roux she’d used to bind the fillings for the pie. She put that sheet in as a bookmark on the page where the recipe was for the chicken pot pie.

It was my most cherished cookbook while in NYC. I made this pie for dinner parties and special occasions, but mostly I made it to alleviate my feelings of homesickness for the land my heart had never really left.

Now, all these years later and living back here in the South, I make this pie to remember her and reestablish the connection I lost when my mother died. It is only when I cook her food that I feel like I AM her.

It is because of her that I know how long to cook the chicken, and that homemade broth tastes so much better than store-bought. This pie has never been “perfect “or beautiful. Mama always pressed the crust into an old glass baking dish, making it uneven and almost layered in spots. The top crust wasn’t much better. I’ve never once rolled it out or changed how she did it. More than one person has mentioned how much “prettier” the pie would be if I rolled out the crust. Those people don’t realize how close they come to not being invited back to dinner again. It’s Mama’s chicken pot pie, and I just cannot do it.

What I can do, though, is feel my mother and her love with me every single time I make it.

Mix and sift the flour, baking powder and salt. Melt the shortening in the hot water, add lemon and egg. Add this slowly to the dry ingredients and mix. Line the sides of a baking dish with dough (it is soft and works better chilled), patting it out with the fingers. Fill the dish with the stewed chicken which has been cut into small pieces, and cover with a thin white sauce made with broth or whole milk. Pat out the remainder of the pastry dough to fit the top of the baking dish. Cut small slits in the pastry to allow the steam to escape. Place in a hot oven at 425 degrees F and bake about 25 minutes.  Serves 6-8.

My mother added carrots and peas to our pies. You don’t have to – this pie is super rich and filling with or without the added vegetables.

Cook up in hot pan and add salt and pepper. My mother didn’t let it brown, but she did let it cook through so that it didn’t taste “raw.” Some may prefer a little color to their sauce, so adjust accordingly.

Stir to combine and let thicken to desired consistency.

Use to pour over chicken and/or vegetables, then top with more crust.