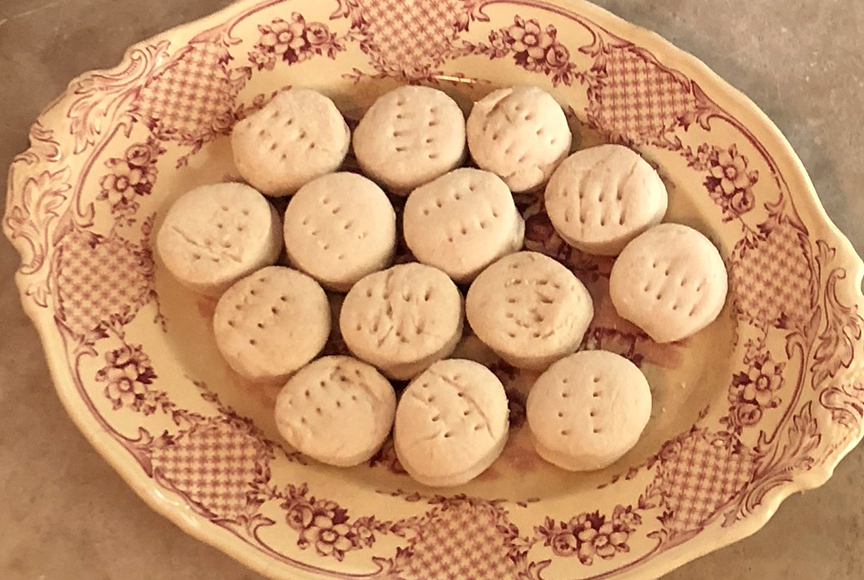 Southern Beaten Biscuits date from the 19th century. They are different from regular soft biscuits in that they are more like soda crackers.

The dough was originally made from flour, salt, sugar, lard, and cold water, and beaten with a hard object or against a hard surface. It is pricked with a fork prior to baking and cut smaller than a regular biscuit.  Some bakers prefer a crisp, white biscuit baked with no browning. These biscuits were traditionally used in “ham biscuits” where they are sliced, spread with butter, jelly, or mustard and filled with pieces of country ham,or sopped up with gravy or syrup. They are sometimes considered “Sunday biscuits” and can be stored for several months in an airtight container.

Beaten biscuits were once so popular that special machines, called biscuit brakes, were manufactured to knead the dough in home kitchens. A biscuit brake typically consists of a pair of steel rollers geared together and operated by a crank, mounted on a small table with a marble top and cast iron legs.

If you’re making these by hand it takes about an hour to beat them — or use the”200 beats for home-folks and 500 for company” rule. It takes about 15-30 minutes using a machine.

Sift the flour and measure. Then sift flour, baking powder, salt and sugar together three times. Cut in the lard, using the fingertips or two knives or a pastry blender, until these ingredients are of a finer consistency than when mixed for ordinary biscuits but not quite as fine as for pastry. Add the cold milk to make a stiff dough. 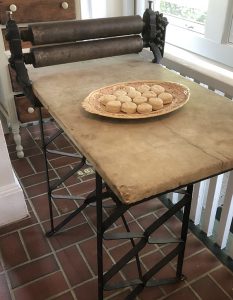 If using a biscuit brake, get the dough in a ball, flatten it out and start running it through the machine, which looks for all the world like a clothes wringer. The rollers in this case are turned by hand. Fold the dough over and run back between the rollers. Repeat this process again and again until the dough is slick, glossy and “talks back to you.” The talking back comes from popping the blisters that the air forms in the dough.

If the dough is beaten by hand, beat the dough out until it is about1/4-inch thick. Fold and beat again. Repeat this until the dough is smooth, glossy and has blisters. (We got far more fascinating blisters beating the dough than when we ran it through a machine.) Finally, roll the dough out to the 1/4-inch thickness and cut as suggested. Do not add any more flour in either method of handling.

All beaten biscuits must have their pricked tops. Some say the best style is three rows, some say four. But these pricks are for more than beauty. If you are using a fork, be sure the fork goes clear through the biscuit and hits the pan. If in doubt that this has been accomplished, look at the bottom of the biscuit to be sure.

You see, the dough has been made into thin layers with the rolling or beating and the folding. In baking, the air between these layers will expand, and the fork pricks aid in holding the biscuit layers together. Many good cooks say a good beaten biscuit should “yawn” during the baking, but this mouth-open appearance isn’t quite so attractive according to our way of thinking.

To bake beaten biscuits, some recipes cals for a 350-degree temperature for 20 to 25 minutes, but our biscuits were a little larger in size, so we baked them a little longer — perhaps 30 minutes. Other recipes call for a 325-degree oven with a baking time of an hour.