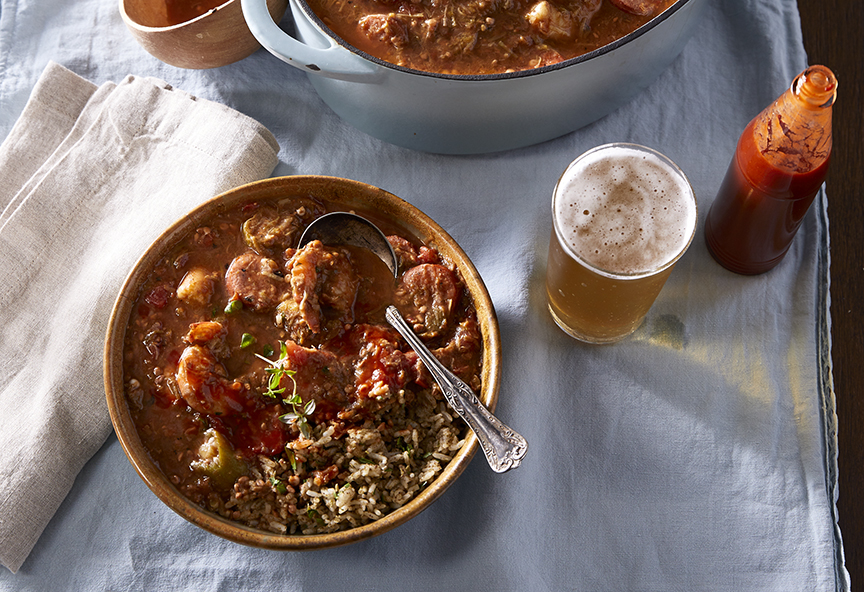 It wasn’t easy being uprooted from the seafood-laden waters of south Louisiana and moving to the mountainous land-locked mill town of Dalton, Georgia. My momma, Doris Helen Richard, met and married my father, William Martin Sapp, Jr. in 1945 in Alexandria, Louisiana. With that single move, she not only encountered cultural and religious differences – Roman Catholic meets Southern Baptist – but extreme food differences. The holy trinity of Louisiana cooking – onions, bell peppers and celery – performed a solo act in North Georgia often atop something called hamburger steak. To my mother, that was the same as being sacrilegious.

Momma’s mother, Momo, was a great cook and my grandfather Sam, hunted, fished and trapped the game filled swamps of south Louisiana to feed his family. Momma brought all that knowledge with her to Dalton after the war as she started her own family.

By 1954 there were five of us to feed, and we three younguns were persnickety as all get out, but Momma was determined to keep her food heritage on our table, and it was what she knew best. But don’t get in her way when she was busy. She loved fiercely and could either be Sister Teresa or “Erk” Russell, late University of Georgia coach known for head-butting his players. She was easy to read and you’d either skedaddle or have a tied-in-a-knot biscuit. 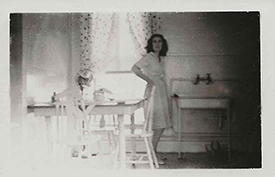 While other kids were dealing with the shortcomings of meatloaf, crowder peas or applesauce, we were dealing with shrimp-stuffed Mirlatons, smothered okra and gumbo. Fortunately we were all excused from eating one dish – mine was smothered okra. While other households sat down to meatloaf, pork chops or ham for meals, at our house we regularly feasted on smothered doves, crawfish bisque or pork roast stuffed with hot peppers and garlic.

Hot pepper was in everything. I don’t know for sure if it was D’Iberville or Father Marquette who ate the first hot pepper in Louisiana but Momma brought them with her when she moved to Dalton. Garlic was her friend and she never met a hot pepper she didn’t like. She also never met a milk gravy she liked. At our house, gravy was thin, loaded with meat drippings, onions, parsley and mushrooms.

Every Sunday Momma put out quite a spread for dinner. There were at least two meats, often a baked hen and pork roast, a selection of several vegetables and always two kinds of rice, white and dirty. Oh, how Momma would scoff today at those folks putting hamburger in rice and calling it dirty. And after attaching the grinder to the counter top and processing all that liver and gizzard to go in the rice, I think she earned the right.

Dinner on a special occasion like Easter or Christmas called for two kinds of dressing, oyster and cornbread. There were shrimp stuffed boats which are a pain to make but oh, so worth it. Seafood casserole, scalloped oysters, eggplant casserole, pole beans, macaroni and cheese made with spaghetti noodles and always there was smothered okra gracing her table. 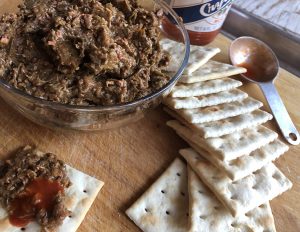 I can remember Momma making it and putting a bowl filled with it on the table for us kids, along with saltine crackers and the ever-present bottle of hot sauce.  We greedily spread it on crackers drizzled with hot sauce.

It’s taken me awhile, read 60 years, to where I am not sitting at the dinner table trying to get out of eating smothered okra. Today I have developed a real fondness for this simple dish. It’s the consistency of mashed potatoes and is a great treat, even for the kid who tried so hard not to like it.  Smothered okra is a great side dish, the base for gumbo or a wonderful dip.  But if you’re not eating it as a dip, it should always be served with dirty rice.

About 30 years ago Momma lovingly made each of her three kids a cookbook of her favorite recipes tailored to each of our culinary skills. I have since misplaced mine in a move (yes, the search is on). This recipe is from my brother’s book and she goes into a little more detail than she did for my sister and I. On a funny side note, that one stalk of celery means one single stick. One time I made this using a whole head of celery and it was way too much, plus it turned green and the okra base should be a deep gray, approximately the color of cooked hamburger, but never ever put hamburger in it.  If you do it won’t matter how long you hang around the Pearly Gates, St. Peter isn’t about to let you inside.

1. Stir all together in heavy pot with tight fitting lid on medium heat.

2. When heated through reduce heat to low and cook approximately 3 hours on low heat.  Do NOT add any water.

3. Stir often so it doesn’t stick.

4. Great as a side dish served with dirty rice, as a gumbo base or a dip on crackers.

2. Add water and broth.  You can use less water and more broth or no broth.

5. Cook covered on low about 6 hours.

7. About 20 minutes before serving, add shrimp.

1. Boil livers and gizzards for 10 minutes in water to cover.

2. Remove from water, drain and cool.

3. Cut gizzards in half through gristle.

5. Add oil to pot and add ground mixture along with hot sauce and salt and pepper. 6. Cook on low heat about 1 hour.

7. Let cool, then divide into ½ pint or 1 pint containers to freeze.

8. When you are ready to use, remove from freezer, thaw, cook for half an hour, add parseley and mix into cooked rice.  ½ pint for 2 cups cooked rice, or to your desired taste.