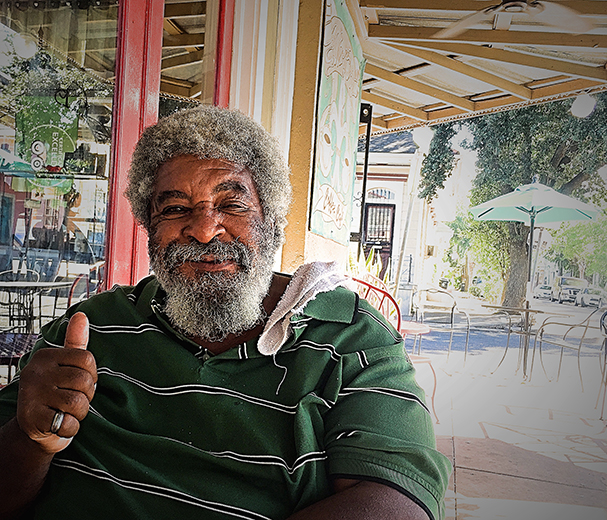 “I like to eat here ’cause they got my picture on the wall.” says Mr. Okra. The picture of which he speaks is a vibrant, acrylic Josh Wingerter painting of Arthur Robinson, better known as “Mr. Okra.” It hangs on the back wall of the Who Dat Coffee Café on the corner of Burgundy and Mandeville Streets in the newly-posh Faubourg Mariny. The waiters (all thin, fabulous, young and wearing vintage sunglasses) know him by name but he looks a little out of place.

Mr. Okra is a 73-year-old, hard-working, blue collar man, unconcerned about the trappings and fashions of the day and completely lacking in irony. He is the real deal, eating a club sandwich and fries in a hipster neighborhood, enjoying his afternoon off.

Mr. Okra is the last of his breed in New Orleans.  “Most folks nowadays don’t remember when this neighborhood was full of working folks and street peddlers. Folks would be in their houses and hear a peddler call out ‘I got milk and cream! Butter and buttermilk too!’ or ‘The Egg Man is here! Come and get your eggs!’ They would walk out in the street and do their shopping. Most folks didn’t have a way to tote groceries back from the markets, so the markets came to them. You had the rag man, the banana man, the bread man, and the calas lady. They would all holler out what they had and the ones who could sing or say something catchy would get the most business.”

People ask if I’m a farmer. I set ‘em straight and tell ‘em I’m a peddler. 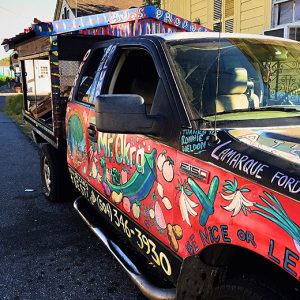 Mr. Okra has a little help in the hollering department. His artfully adorned, 2006 Ford F150 (donated to him after Hurricane Katrina) is outfitted with a PA system so you can hear him inside your house, over the noise of the TV and the hum of the air conditioner. “I got oranges and bananas! I got pineapple! I got garlic rings and spinach!” and the list goes on as he rolls slowly through the 7th, 8th, and 9th Wards. Tourists and his regulars come out to greet him by name. Some sing along with him. Some take videos or selfies and others actually buy vegetables.

I ask him how he has seen his neighborhood change since Katrina. “All my neighbors went away and now the rent is super-high round here. And it ain’t stopping.” he says, pointing to a construction site across the street from our quaint sidewalk table. “It’s getting where working folk can’t make this kind of rent.”

Mr. Okra, son of “the Okra Man” is an enigma. A genuine article making his way in a former workingman’s neighborhood transformed into a hipster paradise now called ”the Brooklyn of New Orleans.” He is the canary in the coal mine warning us that if we aren’t careful, we will force out the very things that make neighborhoods like the Bywater so attractive in the first place.

The push-carts are gone. The Calas lady’s chorus of “Belle ca-las, tout chauds!” is silent. But Mr. Okra, despite a hurricane that killed his truck and sent him to Memphis for a year, de-spite a stroke that slowed him down, despite the high rent and the rough roads is still calling out his wares. With his daughter Sergio taking his route on most days now, we may hold on to this treasure for one more generation.

Mr. Okra book written by Lashon Daley and illustrated by Emile Henriquez is available on Amazon.com

Written and photographed by Tom Ramsey