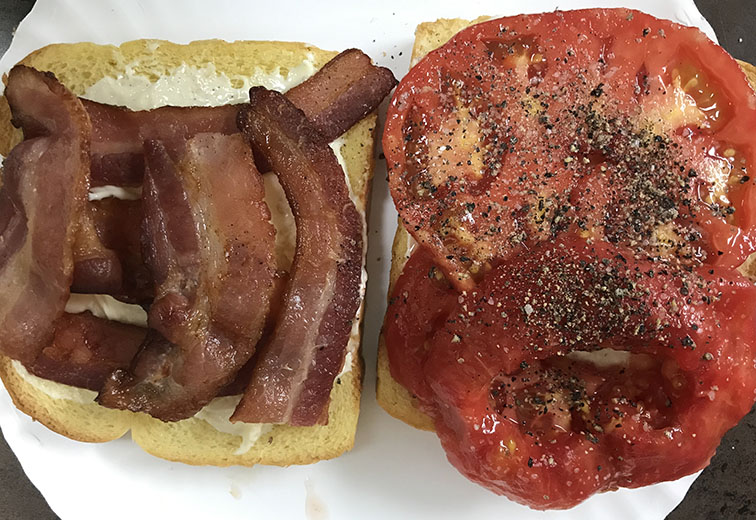 The acidity of the tomato when combined with a sprinkle of iodized table salt was nearly enough to split my tongue. Which is just the way I like it, and when combined with a generous smear of Duke’s mayonnaise, good bacon, and Capt. John Derst bread makes for about the perfect painting of summer on your taste buds.

I’ve never really been one to count how many bacon and tomato sandwiches I have in any given summer, but I eat them fairly regularly because as the old adage of “make hay while the sun is shining” goes, the window of having homegrown tomatoes full of flavor is relatively short. You can make a sandwich with a tomato from the store, but it will never have the flavor and acidity of a homegrown version.

Every time I eat one, at least for a minute, I’m transported back to the annual week at Edisto with the Carlisle side of the family. We piled into a sprawling old beach house, name of Quantico, which had survived every hurricane since the late 30’s. By the end of the week, once every cousin and aunt and uncle had finally arrived, all three stories of the place were nearly bursting at the seams.

It was a pretty easy routine to fall into- within one cycle of the tide, everyone was on beach time and did their thing. Catch breakfast as you wanted to, walk a few steps to the beach, and “do you” on the beach until it was time for lunch. Dinner if we’re being technical about the name and hour of the day. 2:00pm was the big, sit-down meal of the day with each aunt having the responsibility of feeding the gaggle of hungry mouths once during the week. In the early years, my grandmother cooked a meal as well.

After the meal, some wandered back out to the beach for a nap in the shade of Uncle Jimmy’s monstrosity of a tent he had designed and constructed. Others found a chair or couch, while others were dead serious about a nap and took to horizontal positions in a bed. Don’t nap too long in the public areas though- my late aunt Charlotte loved to twist a napkin into a poker and tickle the noses of those napping in the cavernous den when she decided they’d had enough snooze time.

Whoever cooked lunch was responsible for a spread of horsed-overs on the porch that evening as sunset approached. In a long processional, everyone (generally) would take a shower and get cleaned-up, whereby the fragrance of the house would change from Hawaiian Tropic to freshly washed hair and what-not-else you associate with the dirty horde of beach people being clean and shiny for the cocktail hour.

The kids were left to fend for themselves if they wanted something of substance or sustenance for supper- there was an entire shelf designated for tins of cookies and treats- each family’s specialty was there in enough quantity to appease every manufacturer of insulin in the western hemisphere.

The real specialty of the kids, and the adults, too, was a bacon and tomato sandwich on John Derst bread – partly because that was when you could only get John Derst bread on the coast, and partly because my grandfather grew amazing tomatoes and had a garden large enough that he was able to bring enough peach baskets full of baseball sized tomatoes to feed the group for a week.

Through all the years, I look back on those weeks and the tomatoes and the family were the constants. Mitchell and I would beat the snot out of each other at some point during the day, because that’s what two cousins do who are almost the same age and want to settle whatever disagreements they need to settle. We’d get our butts tore up in way worse fashion than whatever fisticuffs we’d laid on each other in our beach wrestlemania.

Hindsight be 20/20 such as it is, I look back and realize that my grandfather was probably one of that most content people that I’ve ever known in those later years of his life. He was happy to pull his chair down by the edge of the water, sling some sort of pyramid rig out into the waves on a 9ft pole, and sit there and smoke his pipe in peace and quiet for long, long stretches of time. I don’t ever remember him catching much of anything, but it was pretty obvious that he was finding whatever it was he was looking for.

He died, and Mitchell got killed not long afterwards, and I was left as the defacto oldest cousin. I couldn’t get into beach fights with Christian because he was too damn skinny even though there’s only 2 years between us.

The remaining family, mid-day meals, and tomatoes remained a constant. We bought them from King’s market out on 174 as we headed onto the island. Some were procured at various roadside stands as folks made the march from NC, SC, as well as the holdouts in Ga.

My cousin Rachael and I have both had an affection for the delectable sandwiches for a long while. We bat pixelated images of sandwiches oozing goodness back and forth on facebook. One year, as she was probably early, early teens and I was late teens, we were eating tomato sandwiches one evening while the “adults” were having happy hour on the porch. I wolfed one or two down, as did she. But she kept disappearing into the kitchen and returning to the living room with a fresh sandwich on a paper plate in its wicker paper plate holder.

Rachael- how many sandwiches have you had?

With a look of 1% embarrassment and 99% pride, she answered: “Fourteen.”

Years later at her wedding, there were special little tomato sandwiches on a tiered serving piece. Everyone raved about them.

I’m glad for the ties that bind somewhere and somehow. That faction of Carlisles is at Edisto this very week with their own clan that has grown to be as big as our’s was, way back when.

I bet if they look really hard right at sunrise, they might catch a glimpse of that old man standing down by the water fishing and enjoying the solitude.

If the breeze blows the right way, they can probably smell the Prince Albert from his pipe.

I know I still can from time to time.