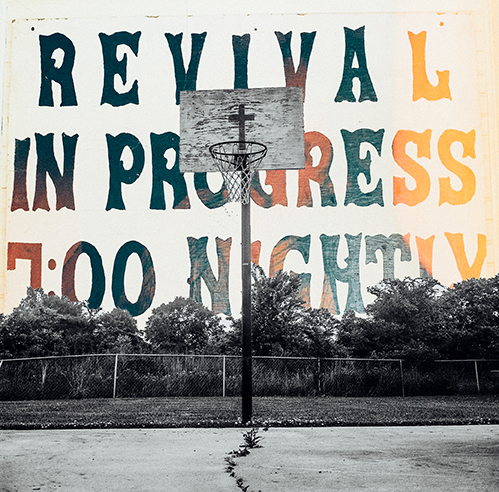 My mama would always say, “instead of raising hell, you ought to lower some Heaven”. It was a saying that would stick with me for life. I say it sometimes now just for a laugh.

I grew up in the Bible Belt of Mississippi where it seems there was a church on every corner, kind of like the Walgreens pharmacy chain. It was a small hometown where if a kid were injured on the football field on a Friday night, both teams would usually take a knee, clasp their hands and bow their heads as the sports announcer would pray over the P.A. system. Religion was everywhere. It was in every sport, school subject and just about every t-shirt. I even learned to play guitar and was in a Christian rock group called GROOVE. It stood for God Reigns Over Our Very Existence. I mean I was “eat up” with the perfect fire for the Lord.

Looking back I can see where having to be at my church, Magee First Baptist, every time the doors opened probably kept me out of a lot of trouble. And for that I am truly grateful. But after college I was so burned out on all the Christian culture and seriously turned off by the fire and brimstone preaching that I just stopped believing all together. It was all the hypocrisy or ‘hypocrazy”, that’s what I called it anyway, that drove me away. I was fed up.

Earlier this year I was out driving down an old country back road and I pulled over to a small church called Damascus Baptist Church. I noticed there was a basketball court in the back yard. I have a fascination with old basketball goals and like to photograph them.

In this basketball court there were two old goals with peeling paint and a cross painted on the backboards. No one was around so I just sat on a picnic bench and stared at them. I sat there in silence and watched as the evening sunlight faded away from the backboards.

I felt so alone for a moment as I thought about all the times in the recent years I have made fun of or just disregarded someone for their beliefs because they were nowhere close to mine. It was an ugly feeling – one that I never wanted to feel again. I was suddenly aware of my own hypocrisy and realized we are all just humans trying to make sense of this crazy world we live in.

As I drove off, it occurred to me that my life and path, no matter what I think or believe, has been surrounded by a greatness and that greatness is all the multitude of people past and present that have cared for me, believed in me, been there for me and even prayed for me, for no other reason than my just being alive. It’s called love. It was overwhelming to grasp that my life has been “full up” with joy, wonder and love. Coming to this understanding has given me new hope, a kind of soul revival where I want to embrace our crazy Southern culture and be more understanding and not so judgmental.

Everyone is fighting a battle. I believe again and I want to be a person that tries as best as I can to love people and “lower some Heaven” if you will, when at all possible. So Peace on Y’all!