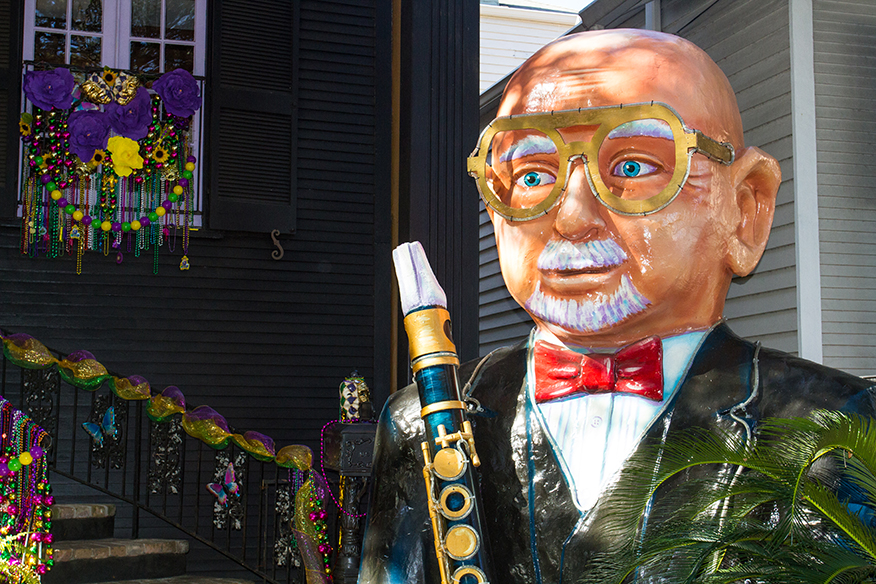 Krewe of Floats…One Porch at a Time

If you have never been to carnival in New Orleans, then you have not been formally introduced. It begins on January 6, Twelfth Night, with nearly two months of pageantry where an endless theater of creative souls flaunt their laissez-faire attitude parading on rolling stages called floats. It’s a telling portrait of a complex city fiercely devoted to its traditions, a mystical hamlet that casts a spell on all who enter, forever tied to the city’s fabled fantasies.

An evil curse invaded the city of New Orleans, a vile virus determined to devour their famed celebration. The powers that be declared the most dreadful mandate; there would be no parades, no floats, no bands, and no people. But nothing can steal the magic of New Orleans and her masked marauders; their inedible spirit has survived the carnage of floods and hurricanes, and they will rise again.

Many locals refer to Carnival as Mardi Gras as it’s more than one day. There are eighty parades, close to sixty marching krewes, and an untold number of marching bands. An economic engine fueled by those who watch and those who ride. And suddenly it comes to a halt consumed by the ravages of a pandemic.

So begins a story about guts and glory, loyalists from across the globe coming together determined to create their own 2021 carnival season. Imagine a new parade, a new krewe uniting the masses, no matter their race, locale, or political persuasion–a krewe by the people and for the people, the Krewe of House Floats.

Let’s peddle back to November 2020, a time when most are working on their Thanksgiving menu, while many in New Orleans and beyond are generally knee-deep in glitter and papier-mâché. Megan Boudreaux, a resident of Algiers Point across the river from downtown New Orleans, was on Twitter sharing fond memories of carving carnival creations with visions of crafting giant fabric flowers. 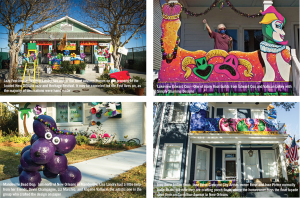 After a couple of tweet conversations, the wheels began to turn, and minutes later, an epiphany. Megan declared in a tweet, “It’s decided. We’re doing this. Turn your house into a float and throw all the beads from your attic at your neighbors walking by.”

Megan is the Admiral of the float fleet with forty sub-krewe captains and maintains a tight krewe. “I am not sure there was one moment when I realized how big this idea really was,” confessed Megan. “It was a frenzied first month just trying to build everything from scratch, but thankfully many generous and talented folks stepped up to volunteer their time & skills.”

The volunteers and sub-krewes dedicate their time and energy with tight deadlines from structuring the organization and consulting with city officials to developing a Krewe of House Floats map for the public to use to view the decorated homes. 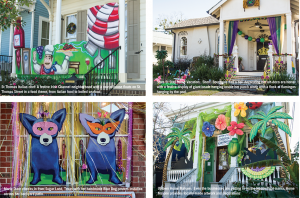 Social media posts light up with thousands of members sharing their crafty creations. People from all over the country and beyond, came together eager to break the pandemic boredom. Those outside the Greater New Orleans area, known as the Krewe of House Floats expats, do more than scrolling through the posts. Many belong to New Orleans parade krewes and marching groups.

Jillian Whalen from Brevard, North Carolina, inside the Blue Ridge Parkway, witnessed her first New Orleans parades fifteen years ago and has been hooked ever since joining parade krewes and marching groups. 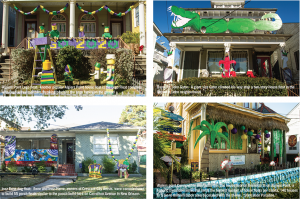 “There is nothing like meeting new friends sitting on St. Charles Avenue waiting for a parade. Sharing food, drinks, and stories with perfect strangers,” said Jillian with enthusiasm, adding she wanted to craft a Mardi Gras float that reflected her neck of the woods. “So we decided to have some local critters in Mardi Gras gear celebrating one of the overlooks along the Blue Ridge Parkway.”

Many turned to everyday material in decorating their house and yard, while others reached out to those suffering from little to no business. Now artists, craft stores, and float builders work day and night trying to keep up with the orders. The pandemic has created a new normal a mix of old and new traditions where many believe will continue for years to come. 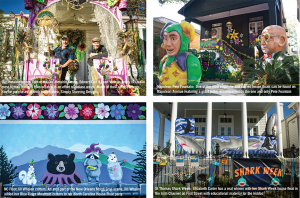 One of the premier float builders is Crescent City Artists. Owners Rene and Inez Pierre believe the porch floats are here to stay. “It’s a one of a kind masterpiece; many label our work as folk art,” noted Inez, adding they are dedicated in supporting age-old traditions and building new ones. “Keeping our history alive is a must, and porch floats is just the beginning.”

Then there’s the royal couple of Carnival, Grand Marshal Marty Graw, aka Edward Cox, and Professor Carl Nivale, aka Vatican Lokey, known for their esteemed knowledge of Carnival history, along with the season’s revelry and artistry. Edward owns Simply Stunning Designs, where he designs theater sets, costumes, props, and more, but that all came to a halt with the onset of Covid-19. 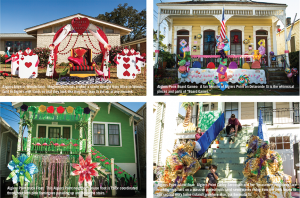 “We were five days away from opening a New Orleans premier and preproduction for five other major musicals, all completely shut down,” explained Edward noting it was just dribs and drabs, but now a feeding frenzy with Carnival artwork commissions. “We just earned three house floats in one day while working on a house float installation.”

Imagine a city dedicated to the greatest show on Earth, and then it’s gone, canceled, an entire industry shut down. From doom and gloom came a glimmer of hope and a miracle was born.

Could it be a fairy tale come true? Why not? After all, this is New Orleans. Her people reach across the globe, a force eternally tied to this storied city. Together they have found the answer to a world of woe, a creative camaraderie that knows no boundary.

Check out the Krewe of House Floats Facebook group with 10,000 followers and a map detailing the decorated homes.