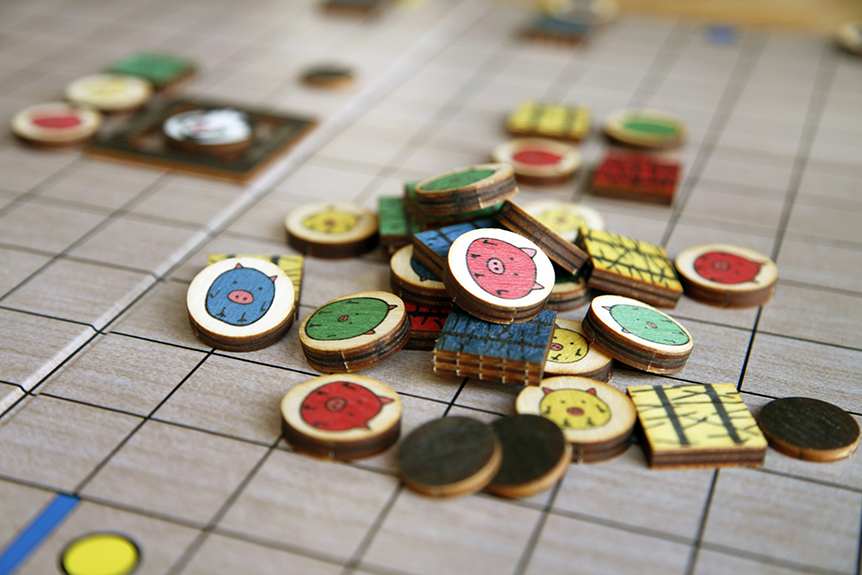 Rockbridge Guitar Company co-founder and luthier, Brian Calhoun, sits at a 2013 Thanksgiving party suffering an unanticipated gauntlet of boardgames with friends and their preteen children. He slaps bubbles, rolls dice, moves pieces along rote cardboard routes—all the while feigning enthusiasm, biting his tongue. But the frustration is mounting.

“This was supposed to be a fun and interactive activity that included everybody,” says Calhoun, 36, a lover of chess who has no children of his own. “But the kid-themed stuff was so insultingly stupid and boring. It was unbearable.”

Finally, the anticlimax of a particularly egregious offender sparks a blowup.

“I start ranting about how, with mindless entertainment like this, no wonder kids spend so much time staring at screens,” Calhoun recalls with a laugh. “Next thing I know, I’m vowing to invent a game that ‘blows this crap out the water.’”

His pals believed differently.  “They were like, ‘Dude, you  make guitars, what do you know about boardgames?’” says Calhoun, whom responded with a cash wager. Most shrugged and changed the subject. One, however, accepted and started talking deliverables. “But really, he was just hoping to have some fun at my expense: He figured I’d forget and he’d be able to call me out.”

Instead, Calhoun approached the project like a serious hobby. He set up a workstation in his kitchen and began tinkering at night after work. He bought top-rated games and analyzed rulebooks, conceits and mechanisms of play. He doodled anthropomorphic farm animals, constructed storylines, carved wooden pieces by hand, brainstormed ways to boost social interaction during gameplay, and more. 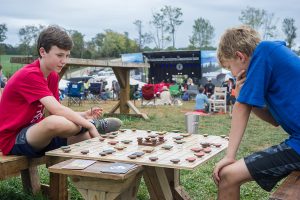 Within a few months, he’d created a new game called Chickapig. Centered around a zany farm theme, players or teams had to use strategy to help their flock of hybridized swine escape the barnyard. Along the way, they dodged opponents’ attacks and inbuilt missives like pooping cows and falling hay bales. Pieces moved in a manner that combined checkers and chess. Additional nuance came from a timer and cards that brought good and bad consequences.

Calhoun made a playdate with the bettor and his family. The results were unanimous: Everyone agreed, Chickapig was smart, wholesome, entertaining, and fantastically special. The friend paid up—and begged to keep the game.

But the story doesn’t end there. The chum in question just so happened to be Dave Matthews, who has been playing Calhoun’s guitars since the mid-alts. The musician fell in love with Chickapig and calls it “a fun and challenging breath of mental fresh air for kids and adults alike.” He partnered with Calhoun to bring the game to market in 2017, “because I thought this was something families everywhere should be able to easily get their hands on.”

An ensuing grassroots marketing campaign brought the game to bars and classrooms throughout Virginia, and won endorsements from the Virginia Institute of Autism. A cult-like following led to a deal with national distributer, Buffalo Games, in 2018. This past year, Chickapig was nominated for a Toy of the Year Award and won the National Parenting Product Award. More than 7 million copies have been sold to date.

Similar to its conception, for Chickapig, the road to success was far from conventional. 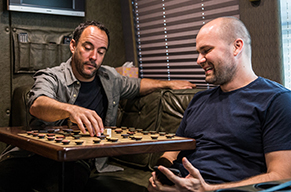 This wasn’t something I’d never intended to commercialize,” says Calhoun.    “The game started as a personal challenge and would-be joke on my friends. I figured I’d make a few copies, give them away as presents, and that would be that.” However, the game’s reception changed things.

“I realized people were getting really, really excited about it,” says Calhoun. Families were playing when he wasn’t around. Others threw Chickapig parties. Purchase inquiries streamed in by way of emails to Rockbridge Guitar Co.

“Honestly, the response took me by surprise and created a pretty serious personal conflict,” Calhoun confides. “On one hand, I loved the game and was stoked people were enjoying it. But on the other, I didn’t anticipate taking orders, much less trying to put together a whole bunch of these things.”

The insistence of friends like Matthews helped him turn the corner.

“They went out of their way to convince me Chickapig had real value, that it was important,” says Calhoun. Kids were eschewing screen-time in favor of the game—and convincing parents to join in. Adults had, in turn, adapted it as a party favorite. “When Dave said, ‘Chickapig is the next Monopoly,’ that was flattering. But when he said, ‘Look, my kids introduce this to all their friends, and they play for hours at a time. Every one of those kids wants to bring Chickapig home to their families. But they can’t, because these are the only copies in existence.’ That altered my perspective; that motivated me to turn Chickapig into a real business.”

As with development, Calhoun approached scaling up like a hobby. He started with an experimental run of 200 games in 2014. Because the first iterations had been handmade and individually unique, their manufacture was grossly inefficient. Calhoun’s first task, therefore, was standardizing Chickapig to make it easier to reproduce. 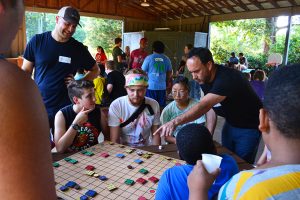 But it had to have an Indy, handmade feel to it,” says Calhoun. “And I wanted everything to be made in America.

After much consultation, he partnered with a number of Charlottesville-area companies. They worked with him to create designs for laser-cut wooden playing discs stamped with hand-drawn art. Next came matching burlap bags for storage, playing cards, dice, boards, boxes and manuals. Lastly, Calhoun  enlisted  his mom and  a few  friends to  handle  packaging  and shipping.

“We sold through that first run almost instantly and got an obscene number of backorders,” says Calhoun. A second wave of production brought 1,000 games. A third, double that. “And the same thing kept happening. Which was pretty incredible considering we didn’t have a website, or, for that matter, an official email address.”

By 2015, Chickapig had gained a regional cult following. Gaming tents appeared at local music festivals like The Festy at Devil’s Backbone and other community events. Kids were founding competitive club-teams at public and private schools. Adult enthusiasts started a weekly meetup at Charlottesville brewpub, Kardinal Hall, that drew crowds of 100-plus players—and inspired owners to hire Calhoun to make table-sized, magnetic boards for the house.

Matthews partnered with Calhoun to ramp up production and marketing in 2017. The result was a year-long tour where former U.S. junior chess prodigy, Judah Brownstein, traveled the country putting on Chickapig events in schools, community centers, and bars. Meanwhile, games were donated to elementary and middle schools throughout Virginia. The efforts attracted the attention of Buffalo Games and led to a licensing deal in 2018—which soon brought shelf space at mega-retailers like Target, Walmart and Amazon, among others.

“I’m very proud to have been able to play a role in advancing Chickapig,” says Matthews, whom had a magnetic board installed on his tour bus. The game is super fun and lighthearted, “but has these awesome social and critical-thinking elements too. To me, it’s just a brilliant, contemporary variation on a number of very traditional ideas. And my family, for one, has very much enjoyed having it in our lives.”

The national attention has led Calhoun to expand the brand. Noticing how kids that were too young to play interacted with the characters, he penned a nursery-age book, Little Joe Chickapig—which tells a story about following your dreams. A game for such players, Chickapiglets, followed last July.

“To know these games are bringing some small sliver of happiness to kids and families, and making their lives just a little bit brighter?” says Calhoun. “I can’t describe how rewarding that is. When I look back over the craziness of these past few years, that sense of satisfaction makes the long hours and missed weekends seem well worth it.” 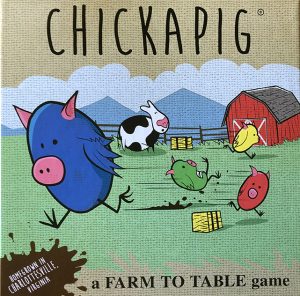