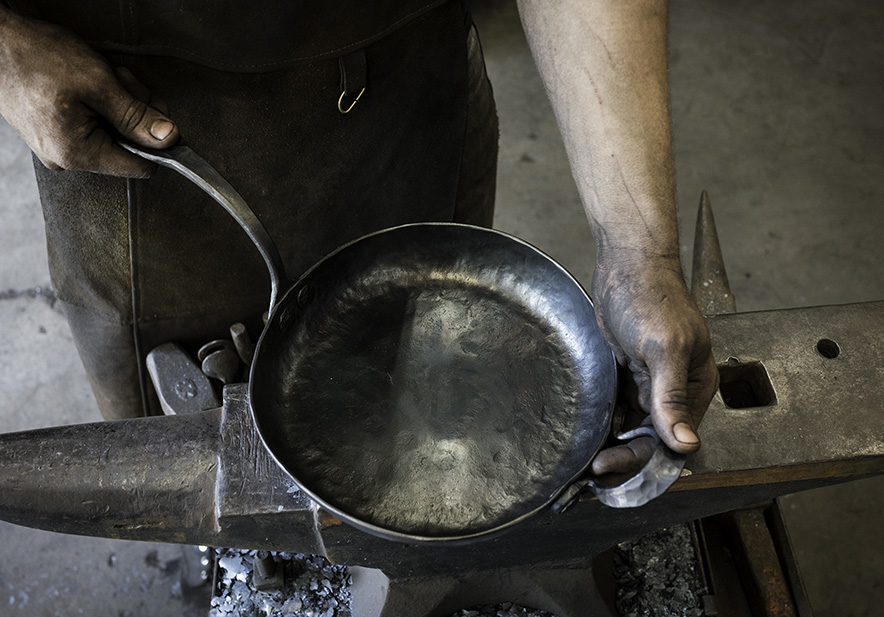 During a kindergarten visit to a living history museum in Staunton, Virginia, Jed Curtis first fell in love – he was entranced by the blacksmith. This passion was destined to grow alongside him. Even now, he dreams of fire and sparks and shapes that emerge from the flames.

As a kid,” Curtis says, “you have this idea of permanence, and this guy comes in and throws that out the window. Here’s metal, but you can push it and pull it and transform it into something else completely new. It just blew my mind – I was hooked right there.”

In exchange for keeping his eyeglasses intact for three weeks, Curtis’ parents bought him his first anvil. His passion continued to grow as one of his Eagle Scout masters built him a coal forge out of a Volkswagen bus brake drum and a hairdryer.

After Curtis graduated from Roanoke College in 2013 with a degree in chemistry, he was faced with a choice: get a “real job” or answer the call of his forge. His then-fiancée (now-wife) encouraged him to take the chance and set out to see what he could build through his art.

Curtis coaxes his hand-forged skillets and bakers, out of carbon steel discs and bars. He hammers each one at his workshop in Roanoke, where he’s kept company by his “branch manager” Layla, an Australian shepherd, and rescued “apprentice” Ollie. 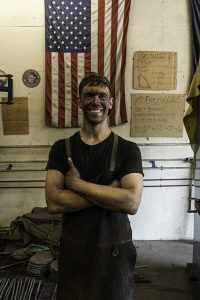 His unassuming workshop sits on the edge of downtown, where freight trains wait to come and go, and everything – including Curtis himself – is dusted in soot. Rows of hammers and tongs are hung neatly on a rack beneath a small sign that reads “Heart & Spade,” the only visible evidence of salesmanship amidst the work. He bought most of these tools from a retiring blacksmith who was happy to sell his supplies intact.

“The modern stuff can’t keep up, so you’ve gotta find the hundred-year old stuff that was built to use, not built to look at. You keep your ear out and know what you need, or if the tool even exists. The other day I needed a particular kind of hammer. You can’t buy them, so I sat there and hammered one out.”

Curiosity drives Curtis, who is self-taught. He stops by old machine shops that are closing down to see if he can pick up a tool or bend an old timer’s ear. He researches old industrial journals, including a favorite coal report from 1906, where he learned which type of coal is best for smithing.

His workshop walls also serve as a reference: a white board tracks projects; hand-written signs detail what temperatures make steel turn blue, red, or yellow. Skillets are stacked on a nearby table, waiting to be polished and seasoned. He creates the odd garden tool, or other projects that tempt him to a new challenge, but mostly, he’s happy with cookware.

Curtis started his smithing business with his eye on architectural pieces – “I liked the scale of it. Big heavy metal, big heavy machinery, swinging a big hammer” – but that changed when he went to the store to buy a skillet.

“I was looking at a cast iron skillet, but it was kind of ugly, so I went back to the shop and threw one together. I went home and cooked on it, and I felt like a prospector who discovered El Dorado.” The skillet was non-stick, lighter and more durable than cast iron, and didn’t have hot spots.

“I remember looking at my wife and thinking: This could be dangerous. We’re gonna have to figure out how to make a lot of these.”

He enlisted a couple friends – chefs – to try them out, and they soon asked for more. Curtis worked with chefs to refine his designs, adjusting handles and thickness to ensure they were easy to use and could put the perfect sear on a steak.

“I hate to call it an obsession,” says Curtis, “but it really is. My wife calls it a curse. You’re constantly thinking of metal, pushing and pulling it around in your head.” These daydreams result in new products, when he has time to test them. He recently created a camp spoon: a 6-inch skillet with an ultra-long handle tailor-made for cooking over a campfire, inspired by his Boy Scout days. His baking plate creates a crisper crust than you could ever hope for with a pizza stone. Any ideas that don’t work are simply recycled by 2500 degrees and the heft of a hammer.

Once people have one of Curtis’ pieces, however, they tend to become heirlooms. Many people request initials or dates to be stamped into the bottom of the cookware to commemorate special events.

“Everybody talks about grandma’s skillet that’s been around forever,” says Curtis, “and now it can really be Grandma’s skillet. It’s giving you immortality.”

As Curtis advances his trade, pairing old tools and technique with modern design, he’s helping the old hammermen live on. Curtis himself, however, isn’t seeking immortality. He is pursuing that shifting permanence that called to him so long ago: the siren song of a bar of steel, waiting for his hands to make it what it will be.