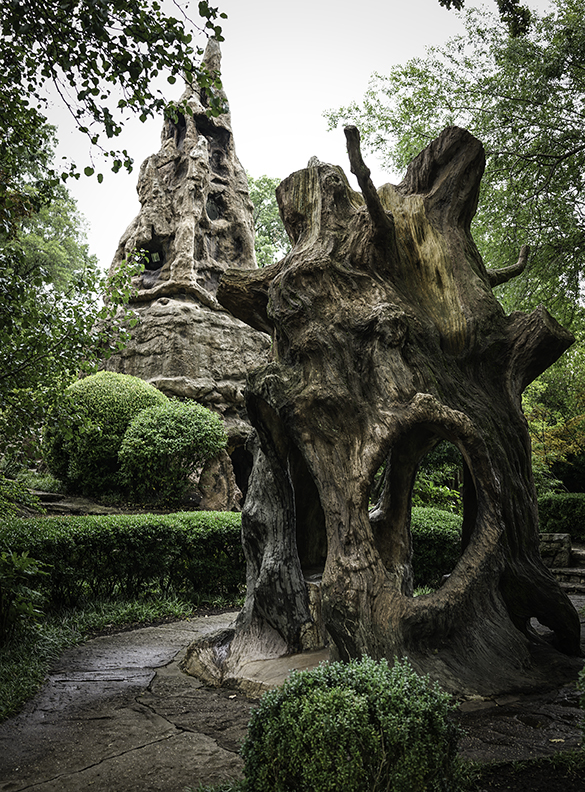 Begun during the 1930s, the Crystal Shrine Grotto is a fantastical man-made cave located in the center of Memphis’ Memorial Park Cemetery. Built during the low days of the Depression years, it was completed in 1941.

Clovis Hinds, a successful Memphis businessman, sold his company, Cotton States Life Insurance, and started work on what would become his legacy. His ideal for Memorial Park Cemetery was to create, as he called it, “a landmark cemetery marked by beauty and serenity that will attract people.” To this end, Hinds hired Mexican-born artist Dionicio Rodríguez who proceeded to dig a cave 60 feet into the hill and sculpt it from concrete.

When entering the concrete-carved grotto, you get the feeling of walking into a real cave. It is dark, cool, and you are surrounded by sculpted stalagmites and stalactites crafted from raw crystals sparkling under multicolored artificial lights. However, in this cave you are surrounded by soft music playing and every surface is completely covered in crystals. These crystals frame dioramas depicting Christ’s journey on Earth—the Nativity, the Last Supper, the Resurrection, and others – each carved in rock quartz crystal, semi-precious stones and wood. 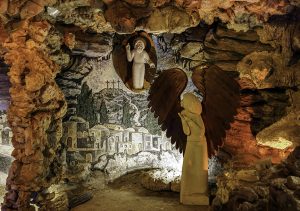 The “Garden of the Gods” includes three conical rock formations; the largest houses the Grotto which is fronted by a knotty hollow tree called “Abraham’s Oak,” through which visitors can walk and enjoy the peaceful man made koi pond and beautifully landscape gardens. Here you will also find a bench in the shape of a fallen tree limb, a “Fountain of Youth,” a second tomb-like cave known as the “Cave of Machpelah,” a “wishing chair,” and a series of rustic footbridges that lead to what Rodriguez called “God’s Garden.” All are sculpted from cement using a trabajo rustico or rustic style.

It is said Rodríguez was so paranoid someone would steal his concrete techniques that he mixed his cement tints in private and destroyed all the materials once the piece was complete. Little is known of this self-taught artist beyond his prolific body of work. Vance Lauderdale of Memphis magazine wrote about Rodríguez, “Much of his life is shrouded in mystery. But somehow, he perfected a technique for chemically tinting concrete and then carving or molding it into naturalistic forms that closely resembled stones, branches, trees — whatever he wished — even down to artificial wormholes, cracked branches, and peeling bark.” While his methods are no longer with us, the sturdy concrete grotto doesn’t seem to be going anywhere and was added to the National Historic Register in 1991. 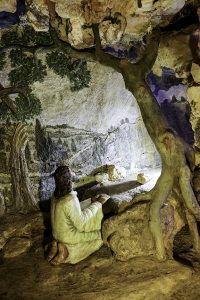 The Grotto is open daily. Admission is free.