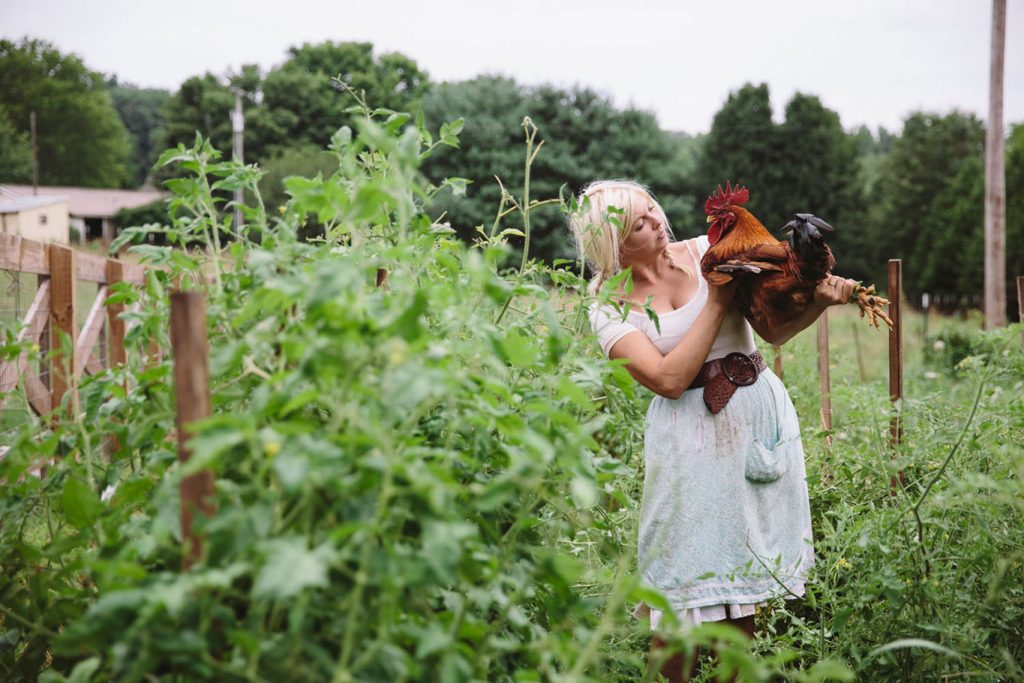 Back in 1942, during WWII, Rosie the Riveter showed American women they were capable of performing the same jobs as men. Today in 2016, that message is still going strong.

[dropcap letter=”S”]amantha Lamb, a 31 year old Tennessee farmer, could be the poster child for strength of women and wants the world to know that “being a woman farmer isn’t about proving men wrong, but rather, proving women right.” And she means it. Hard work and persistence has made her a champion in the movement for women farmers nationwide and for building a successful Community Supported Agriculture (CSA) business in Santa Fe, Tennessee.

Women farmers are the fastest growing segment of farmers nationwide.  Those who are the primary operator of a farm, represent about 30 percent of all farmers. As a rule, these women work less land and have less availability to money to hire much needed labor. Because of this, more women are opting for organic and sustainable farming, allowing them to work smarter on smaller pieces of land.  The degree that these women are willing to help each other out with what worked and what didn’t is inspiring.  Lamb has persisted in being a role model of how hard work pays off.

She works from sunup to sundown and is known for not staying out past nine at night. “I wish I could stay out late, but when you have to get up before dawn for the animals, you just can’t.”  But, as a woman farmer, she is also known as someone who can hold her own and works her farm every day, mostly alone. “If I’m lucky, sometimes I’ll have help.”  Noticeable are the bug bites on her legs, the dirt on her skirt and under her fingernails – all badges of honor. “It’s what happens when you work in the dirt,” she says, proudly looking at her hands.

You have to have a sense of humor when you work a farm by yourself, because there’s always going to be something going wrong, or some horrible accident happening and it’s going to be entirely your fault. But, you have to learn to from it and move on. I mean, you can either laugh at it or get upset.

Lamb’s love for her twenty acres, and the animals that inhabit it, is obvious as she guides you through the multitude of chickens, ducks and geese filling the barnyard.  Goats, sheep, cows and Ruby, the donkey are settled in the pasture. Someday she is hoping for horses, but at the moment there are fencing issues to be resolved. “All I have is Ruby, my donkey,” she laments jokingly as she walks by and runs her fingers down Ruby’s back. It’s clear that Ruby and Samantha have a mutual respect for one another. Samantha feeds and loves on her and Ruby, in return, “helps out”, following her all around the pasture.

Lamb can frequently be found wearing a carrot to hold up her blonde hair but around Ruby or the cows it can be tricky.  “They’ll chomp on the carrot and cut your hair at the same time, but I still do it because I’m ornery and I never learn.”  Ornery or not, her friends love her quirky sense of humor and frequently tell her she looks like a milkmaid from a fairytale, so that’s what she has become. Wearing work boots with her feminine cotton print dresses, while she works the farm, she has created her own storybook brand. 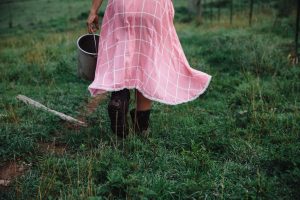 To those who would question why she wears dresses to work on a farm, Lamb suggests that her dresses allow for a huge range of movement – something she needs as she works a vegetable garden and all those animals. “I tried going back to pants once or twice, but it was like ‘no, it’s not going to happen’. There’s something wonderful about twirling around in a dress,” she says. And twirl, she does. As she’s feeding her animals, she throws the feed out with the grace of a ballerina that just might also be a fairy princess.

So, armed with her two Maremma sheepdogs, Chekov, age 16 and Weeza, age 4, Lamb works her acreage producing a large variety of vegetables in the garden and caring for her menagerie of farm animals.  Her loyal dogs are huge, yet gentle, and always on alert. Weeza, the youngster, will even try to eat a chicken roaming the farmyard every now and then, but Lamb forgives her, because, she says this sweet dog is “just a farm girl…just like me.”  Such is life on her “beautiful mess” of a working farm.

I just try to make sure the sheep don’t get out and the dogs don’t eat the chickens.

Born in Oklahoma, Lamb has almost always loved the idea of farming. Her parents didn’t really farm, but they did keep cows on their land.  She credits her grandfather with inspiring her to become a farmer. “He lived in an age when it was ‘do or die.’ He wanted to be self-sufficient and rallied to help the small farmers,” she was struck by how he cared for the land and his animals. “He was always talking about nature,” she added. “I realized I wanted to be like that, too.” 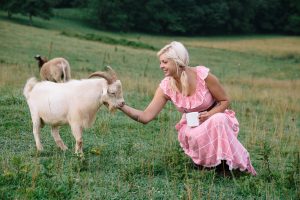 Lamb started out farming on her grandparent’s farm that had been neglected by renters for years. With hard work, she turned it back into a working farm and kept it going for about five years.

While in Oklahoma, she became inspired to take photographs of the land and animals she was raising.  “I started doing photography because even though I loved agriculture, I wasn’t sure I could make a living by just farming,” Lamb explains. “I thought I could live the country life that I love, and take photographs for a living.” Passionate about her art, she beautifully captured her love of the farm in her images. But, the more time spent on her art – teaching classes and traveling to shows – she found that it wasn’t conducive to living the life of a farmer.  “At one point I realized I just wanted to be home with my animals.”  So she threw herself into farming full time and photography became a hobby.

It was during this time that she met her soon-to-be husband, Daniel Foulks, fiddle player for Parker Millsap, at an album release party. “I literally ran into him – I ran right into him at the venue,” she says, laughing. “After we got to know one another, I thought to myself, ‘This guy is great.’” She says it was one of those things where they didn’t want to stop talking. “He invited me to a party at his house and said he was a fiddle player. I thought, ‘oh sure you are’. I thought, maybe he “dabbles.” She soon found out that he was “really good – fantastic even.”

They decided to leave Oklahoma for Tennessee, so Foulks could be closer to Nashville. Lamb began looking at farms 24/7 and “this farm was the second one I looked at and I didn’t look anymore.” She says she “just knew it” when she saw the big red barn sitting amid the rolling hills. 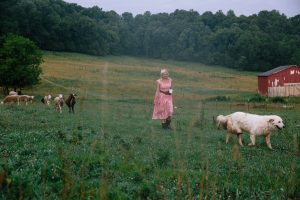 After packing up all her animals in a semi-truck and leaving Oklahoma, Lamb arrived at the Tennessee farm in March of 2015. She brought her dog, Chekov, cows, ten sheep, chickens, ducks and geese with her and never looked back.

Cows, sheep and foul ambled among the guests sitting inside that old red barn the day Foulks and Lamb married, a little more than a year ago.   Thistle, a Dwarf Nigerian goat with dwarfism, was the ring bearer.  An antique wooden ladder strung with the lights from the ceremony still hangs above it all.  Suspended across the opening on the front of the barn, below the hayloft door, are the remnants of large letters that once read, “I love you forever and heifer”, further proof of Lamb’s quirky humor.

A musician – not a farmer – Foulks is still finding his way working on the farm, but she feels lucky to have him. When asked what her fiddle-playing husband does at the farm, Lamb laughs, “He does the cooking and cleaning and I grow the vegetables. He’s the famous one, I’m just a farmer.” He has also become the builder in the family.

He would have never been on the farm if it weren’t for me. But I told him from the very start that it was a package deal – me AND the farm.

And, it’s in her hardworking garden where you will find her most days tending a variety of seasonal produce for her customers.  During today’s visit, she is gathering tomatoes, Italian and French varieties, in addition to several heirloom types. Among her cucumbers are miniature Mexican sour gherkins. “It’s a tiny little cucumber that is really popular with restaurants. They look like little watermelons,” says Lamb holding one out for inspection.

When a rooster gets over the fence into the garden, she doesn’t bat an eye. Instead, Lamb walks right over to him, reaches down, picks up the errant bird and calmly throws it back over the 4-foot tall fencing. Brushing off her hands, she gets right back to business, pulling carrots to be sold at market later this week.

On Thursdays she makes the short drive to Nashville and on Saturdays she sets up in nearby Columbia, at a local market, making it easier for her CSA members to pick up their baskets of farm goods.

Market days are always a little crazy. “I end up running around like a chicken with its head cut off,” says Lamb. “I’m loading up the ’72 Ford truck named Sue and looking forward to seeing my customers, and looking forward to selling lovely produce.” There are eggs to gather: duck, chicken and goose.  Homemade pastas, jams, jellies and tomato sauces, all made by Lamb, to pack up. She also produces soft cheeses and other items from the dairy produced on her farm.

At The Bloomy Rind in Nashville, Kathleen Cotter, owner of the artisan cheese shop, says she looks forward to Lamb’s offerings on a weekly basis. “I’m a huge fan of Samantha and her products!” says Cotter. “She sets up a weekly farm stand outside our shop and since we primarily sell meat, cheese and related products inside the shop, we love to have local farmers (like her) offering produce to round out the shopping experience.”

Lamb loves antiques and uses several old German harvesting baskets to collect her vegetables in for market. Pulling up rainbow carrots, she exudes a joy that only someone who truly loves what they do can show. Her hands are dirty, her apron is stained, but she is in her happy place, reaping what’s she’s sown. “I like to grow rainbows.” And, it shows. There are rainbow carrots in yellow, orange, purple, and red, multi-colored rainbow chard, and multiple types and colors of potatoes. 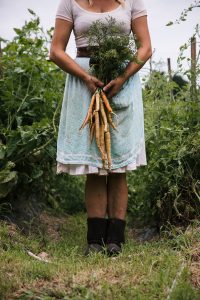 Lamb says the reality is that some of her animals will become dinner on people’s tables at some point. “I work to give them all good lives, whether it’s duck, goose or lamb. I want to combat the whole controlled feeding units and mass production of cheap meats.” Even though she is giving people the chance to eat “happy meat,” it can still be tough to say goodbye to the animals that will go to slaughter. However, she knows that the lucky people who get that chicken are going to love it, because it was raised with love. “It’s all part of the agricultural life,” she says.

Her goal is to become a diverse holistic farm that raises happy animals on happy land. “It’s mostly quality over quantity for us.” For Lamb it’s an honor to be able to raise these animals and give them a great life.

“I take care of my farm like my own heartbeat – you do what’s necessary to get the job done.”