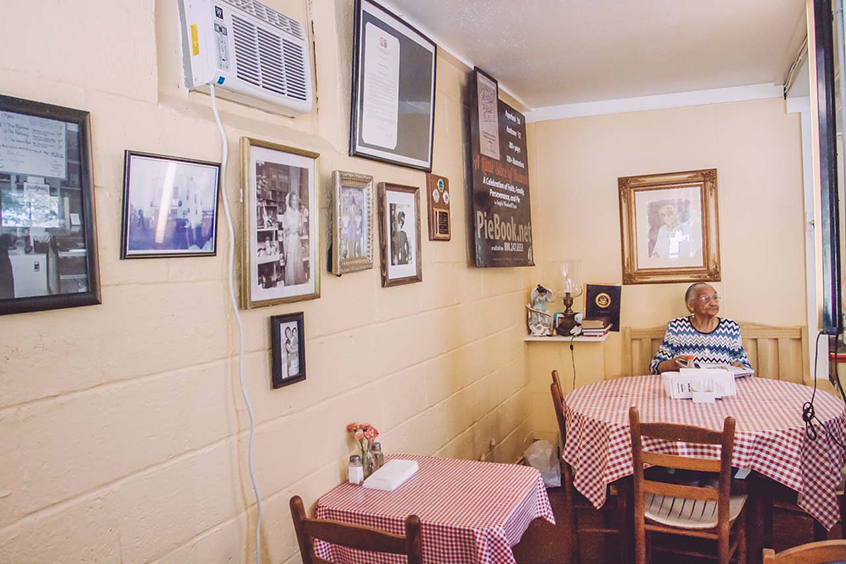 These are simple ingredients in the pies baked up fresh and hot in the ovens at Woodruff’s Café and Pie Shop in Monroe, Virginia, every morning, flavorings and fixings that aren’t listed on any recipe cards or stocked on the shelves of any grocery stores. No amount of money can purchase them for import from far off lands; no venture can procure them from exotic locales. And while the pies made with these ingredients may look quite ordinary to the eye, their incredible flavor speaks to the very nature of what makes Woodruff’s pies a slice of heaven: the love, faith, and heritage that sweeten every last crumb.

Each pie, in fact, is part of a rich story, like a page of family history that began long ago when slaves still worked the land where the café’s cement block structure has come alive with the tantalizing aroma of owner Angela Scott’s crust-based creations. Having been purchased by Scott’s great-grandfather with pension money from his time serving as a soldier in the Civil War, the property has been passed down from generation to generation in the Woodruff family to be part of their legacy of pride, persistence, and soul. Not one grain of dirt on the corner they claim is without a tale to tell, as it has lived its life in a succession of service—first, as the site of a crudely-structured blacksmith shop run by Scott’s grandfather; next, as a sort of sanctuary for children who needed shelter from the rain as they waited for the school bus. From there, it took shape even further when Scott’s parents James and Mary Fannie Woodruff opened a grocery and general store in 1951, building a two-story cement block building that could house both their sundries and serve as their family home.

For three decades, the general store served the small rural community around it, though its greatest role came in the way that it—once again—served as a sanctuary to those in need. “There’s a family tradition here on this land of really of being here for people. When my great-grandfather had his blacksmith shop, travelers would stop there, and he would let them camp overnight while he fixed their horseshoes— he gave them hospitality. My parents did the same thing with their store—it was like a safe haven for people who could come and sit around the old wood stove out of the weather; and if they didn’t have money to pay for something they needed, my parents still gave it to them. I even remember women coming there to stay safe while they were running from abuse,” recalls Scott, recounting the timeline that runs through her family’s corner on Elon Road, just off Route 29.

The cinderblock structure has indeed seen its use, and throughout the years of Scott’s childhood, she and her two older sisters called it home, living with their parents in an apartment just over the store. “When we were growing up, Mama would take her broom handle and bang on the ceiling of the shop to wake us up in the mornings, because that was the floor of our bedroom!” she laughs.

As time went on, the Woodruff’s store was left hanging by a thread, as its rural location made it less convenient than the more modern convenient stores of nearby towns. And so, in 1982, its doors were closed for business. Life went on upstairs for James and Mary Fannie, however, as they continued to use it as their home, while the fate of their shuttered store remained uncertain. But like any good story— or, perhaps, any good recipe—the best was yet to come, as inspiration and prayer gave Scott the perfect way to honor her family’s legacy by opening Woodruff’s Cafe in 1998. “Our family has always had businesses here, so it’s sort of like a tradition,” she notes, citing the fact that her great-grandfather’s blacksmith shop was the very first African American-owned business in the whole county.

It was a tradition that would certainly take its fair share of determination to carry on, as Scott had no background in the restaurant business beyond the time she’d spent working in one during hear college years. But her natural intelligence, coupled with some great advice and support from her very business-minded mother and father, gave her the push she needed to step out in faith and follow the Lord’s prompting to renovate the foundering space and reclaim it as a lunch café and store. “Faith has really been important, every step of the way in this, and I was really inspired to take the chance,” Scott says. “For me, it was a really wonderful way to keep our family history going here.”

Admittedly, it was a hard first few years, with days that seemed less than promising for keeping things afloat. But as Scott began branching out by adding pies to her simple menu of sandwiches, those pies gained notice, and word of mouth spread that Woodruff’s pies were something worth stopping for. Wisely changing the sign out front to draw attention to her offerings of deep-dished delights, traffic began to build; and the few pies that Scott had originally played around with making became a mainstay that kept people coming back for more. “People started coming in for pies more than anything else, so that was when I really had to get serious about making pies—and making them really good,” Scott says with a laugh.

Ask anyone who’s tried those pies now, and they might argue that calling them good is an understatement. Never having gone to pastry school or receiving any training other than the good old-fashioned method of getting her hands dirty, Scott feels her baking skills were passed down by her Aunt Othella on her mother’s side—“the baker in the family.” It was a love they shared and one encouraged by the gift of a Southern Living cookbook on Scott’s twenty-ninth birthday, which ultimately became the source of a number of recipes that helped hone her talents as a baker.

Using her old recipes and some passed down through the family, Scott began baking with apples, peaches, and berries from a nearby orchard, basing her menu on the fruits that were in season so that each pie would be full of fresh flavor that would make them truly divine.

As Scott will readily confess, filling was her strong suit in those early days—but crust was something she had yet to master. And until she did some online research to find a no-fail recipe that she felt confident in, she bought her shells ready-made, filling them with her fruits and custards before baking them each day. “It really was ridiculous,” she laughs.

Ridiculous or not, her pies had enough traction to get her hungry to learn to make her own dough, and so she tweaked the online recipe she’d found to make it even better—and that difference has obviously served her well. Now offering more than a dozen different pies including everything from chocolate chess pies to cherry crumbles, Scott has a following of pie lovers who come in day after day to have a slice—or five—of her delicious, flaky crusted creations. The pies in and of themselves are certainly enough to get people in the door, but there’s something else that adds to the charm of the humble little café—Scott’s mama, Mary Fannie.

Having lost her husband in 1998, Mary Fannie still keeps the apartment upstairs, her independent spirit and determination strong as she’s thrown her whole heart into helping her daughter work the café. “Mama gets up out of the bed every morning at the same time, fixes breakfast for herself, comes in here and peels apples or caps strawberries or chops celery—whatever she can to help me. And then she starts her day greeting the customers.”

Quickly approaching her 101st birthday, Mary Fannie is a draw unlike any other as she sits at her round table each day in the café, the chairs surrounding hers open to everyone and anyone who wishes to take a seat and set for a spell.

One visit with Mary Fannie is a true experience as sweet as any pie, as she tells stories of days gone by and sings in her strong, clear voice some of the hymns and spirituals she’s loved her entire life. “So many of our customers come to spend time with her and listen to the stories she tells. And they love to hear Mama sing.”

Many are the occasions, in fact, when songs are as thick in the air as the aroma of pies, as Mary Fannie isn’t the only one whose voice can be heard raising hymns to heaven. She’s often joined by all three of her daughters, now that Scott’s twin sisters Darnelle and Darnette are part of the baking team. It truly has become the family business that Scott had hoped to build—and those pies? Those pies are like a welcome to the family, a warm hug on a plate. “People love pie—there’s just something about it that makes them happy, and they’ll start smiling when they walk in the door.”

It’s a smile reflective of being filled—with warmth, with love, with nurturing. And at Woodruff’s Café and Pie Shop, that’s a feeling they serve fresh and hot every day.