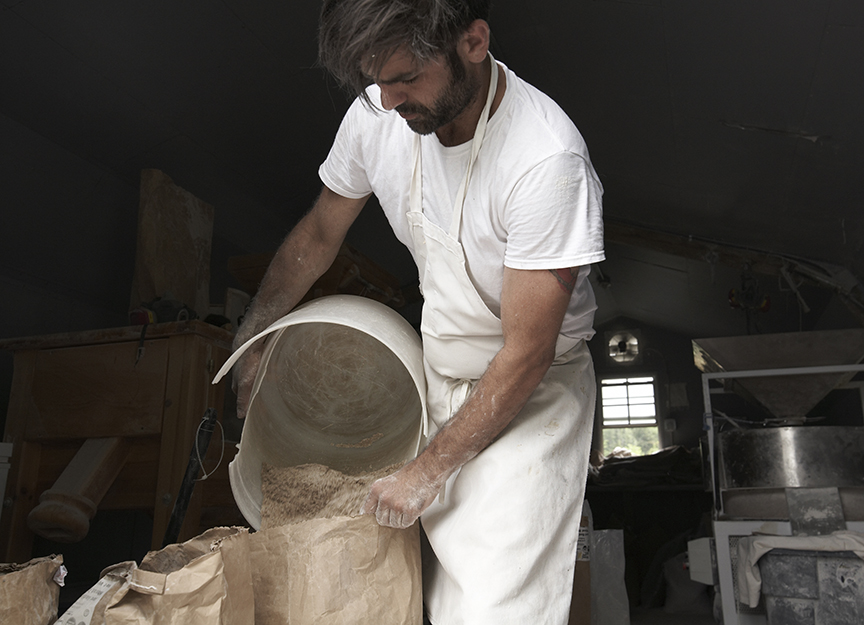 A light, overnight rain spatters the broad, green leaves of the Cherokee White cornstalks, lined up in formation like soldiers, ready for battle in the heat of the coming day’s summer sun. To their side are the blooms of heirloom Japanese Buckwheat – dazzling white speckles spread across the grayed morning twilight. As clouds break over yonder peaks ridged blue, Warren Creek gurgles nearby, and the Hominy Valley awakens with aroma in its fields.

[dropcap letter=”D”]avid Bauer has honed his palate over the years, developing an ability to take a grain plucked from the field and intuitively know, just by smell, how it will transform from harvest, to flour, and finally to extraordinary dough. “Everything we do here is not about whole grains versus white. It’s not even necessarily about old grains versus new grains. It’s about constantly finding grains that have beautiful smells to them and milling them in a way that preserves those native smells. If you do that, you are going to stay focused on the flavor.” Bauer’s earlier years were spent in Minnesota working on farms, building brick ovens, teaching, and baking for chefs, getting his first real jobs in farm to table kitchens where ingredients mattered. But, he says “there was this big contradiction in that the restaurants were using interesting cuts of meats and heirloom vegetables, all with stories behind them, but as a baker it was ‘here is your dead industrial flour’. It was jarring for me so I wanted to get in the country and get closer to raw materials. I wanted to figure out something with bread.” With that in mind, he relocated to Asheville, North Carolina in 2006. 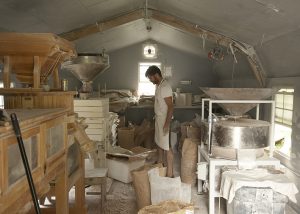 Bauer is constantly covered in flour. At no moment does he seem to be free of its grasp. It flecks in his hair. It covers his arms, shoes, and legs. At any time he’ll appear with powdery white finger streaks running through his crop of facial hair. It has influenced his lungs and brain so much that there is no longer room for nicotine and smoke. Flour dust takes precedence. Even after a quick clean up from the day’s dough production and a change into fresh clothes as he prepares to depart for his evening shift as co-owner of All Souls Pizza, he remembers that he needs to start grinding another batch in the mill. He disappears shiny, spiffed, and dapper only to return moments later, completely dusted in white, then into his truck and off to the restaurant. He was free of it for maybe two minutes.

As the hub and founding father to Farm & Sparrow Bakery, Bauer has become a savant of ‘everything-bread’ and has accepted his lifestyle in full, floured coatings and all. “By taking all the aspects of production under one roof, getting involved in growing varieties, being involved in the farming side with the farmers, doing all the milling and processing right here, baking, selling…what we are trying to do is to experience that dynamic interplay between all aspects of a traditional bread community – the miller, the baker, the farmer, the seeds person – all those things…I’m trying to have a little bit of all of that in our process,” he says as the white dust swirls around him like falling snow. 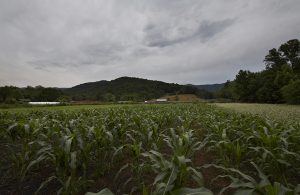 Their process begins in the two acres of seed plots that Farm & Sparrow Bakery tends just south of Candler, North Carolina. Here, Bauer and his team build a foundation of seeds to disperse, focusing more on heirloom and landrace grains and some of the more dynamic “figuring out’” stuff. “A lot of the idea here is NOT to say ‘this is the bread’ and we’re going to get these farms to grow the grain for us. That’s just a contracting approach. The idea is to set ourselves up to evolve towards something in a way that people might have done spontaneously given their conditions. So…we don’t farm…we grow seeds. We take old varieties, which still have a lot of wildness to them, still have a lot of adaptability to them, and we grow those out and try to get those on farms and then try to see what comes back from the different places. So every year the breads change, the pastries change, because the grains are changing.”

The seeds collected and grown by Farm & Sparrow are given to farmers throughout the region, taking advantage of the bakery’s unique centralized location to multiple options of terrain. “It’s been as much as thirteen farms in five states with us at the crossroads. If you go East you start hitting intense heat, sandy soil, and tropical storms toward the coast. Here you have the mountains. Head north and you’re in the lower Midwest with clay soils, bogs, and all that different stuff. In Tennessee there is a whole other set up. North Georgia has a weird mix of red clay soils and really intense heat. They are all different. We’ve kind of put ourselves in the middle of this little spiral of activity and then we roll with it and see what we can do each year.”

The wood fired bakery and stone mill operation of Farm & Sparrow are tucked into the hills around Morgan’s Cove, just a few minutes drive from its sister fields. The homestead is slung low to the ground and bears no indication that inside, some of the most thoughtful baking and agri-artisanal approaches are being tested and successfully carried out. At first glance the house may seem questionable. It’s the kind of outland digs that if you were on a Sunday drive and had car problems, you may pass it up looking for help. 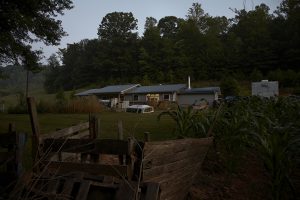 [perfectpullquote align=”full” bordertop=”false” cite=”” link=”” color=”” class=”” size=””]With items strewn about, household appliances crowding the front patio, clothes drying on the fence, a camper, a shipping container, a truck bed cover, and a couple of dirty, beat t’Hell vans lining the gravel driveway, it may appear to be in a state of disarray.[/perfectpullquote]

But should you lion-up the courage and approach to unearth the mystery behind the curtain, you’d be more likely to hear the whirring of the millworks or the laughter of the bakers, thoughtful discussions of local swimming holes, punk v. E-street, baking schedules or experimental test batches of flour combinations. You would certainly become entranced by the smells of fresh baked bread, stewing active culture, and fresh spun, ground, and sifted grains. You may realize that something deeply seeded and thoughtfully harvested is taking place within, and that the legitimacy of this heartened-craft bakery is more than meets the eye.

A full day before a twice-weekly bake, Farm and Sparrow’s oven is fired up and fed a continuous diet of poplar, black walnut, oak and locust to burn slow and hot. The intense heat seeps deep into the oven to saturate the masonry in full. By the following morning, after the flames have passed away, a naturally flowing vacuum of heat waits to bake the shaped and scored dollops of raw dough. Baker Tony Scalia, fills his dance card with the task of feeding the oven’s appetite during a day’s bake. Sliding the peel, shifting the loader, filling pans with water, acrobatically dipping below the holding bar as if it all were an Olympic event – always aware of the timing and always watching and checking the breads, he works. “We used to say that every oven has a dragon within it, that you kind of have to tame it, or more like, can we just compromise, and work together?” He grabs a loaf of Market Bread off the cooling rack and admires it. The corners of his mouth turn up as he raises the loaf to show the other bakers working across the room. They all quietly raise their eyebrows and beam with content – collectively satisfied with the results. 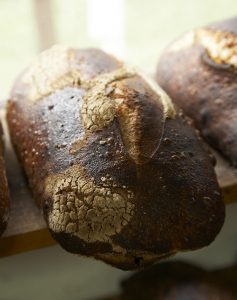 David Bauer’s ability to incubate a thriving culture is not only evident in the results of the glutinous structures developed in his breads, but also to those with which he chooses to envelope into the bakery’s own fold. He has gathered a devout, motivated, and La Croix addicted team, all of which seem to have been drawn to the true heirloom grit of Bauer and to the bakery’s bohemian approach. Together they seek out deeper meaning and a more grounded experience. Baker Sarah Hinkes transplanted from Miami only 5 months previous, “basically because of this job,” she says, being drawn to the lifestyle Bauer has achieved so far. Moque Krape, found her way back to the Blue Ridge after moving about from Chicago to Seattle, mostly to provide a desirable surrounding for her and her husband to raise a son.

“We are kind of like his big brothers and big sisters…” says Scalia, referring to the team’s ability to carry out many of the processes of production, baking, and selling at markets on their own, buffering Bauer from at least some of the day to day stresses “…you know, running two businesses and all.” There are times when Bauer does seem to be scattered about, spinning plates and keeping his flour covered nose to the grindstone. Whether it is dealing with a faulty water well, running to the market for carrots and Miller High Life, attending business meetings, accounting for chickens missing from the coop, or just with maintaining the constant spin and shimmy of the millworks, most of which is running to provide dough for his restaurant, All Souls Pizza. 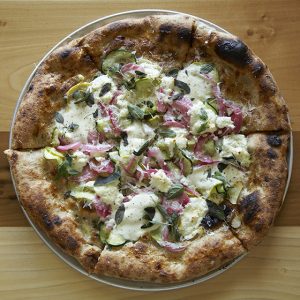 Located in the River Arts District of nearby Asheville, NC, All Souls Pizza is a venture shared by Bauer with co-owner, Chef Brendan Reusing. Bauer not only uses the restaurant as a retail outlet for some of Farm & Sparrow’s breads, but also takes advantage to use it as yet another venue to share his farm – to -(seed-to-stalk-to-flour-to-dough-to-bread-) table ideology. Bauer takes the lead on the dough/pizza program while Reusing oversees the remaining menu items. Both place great importance on using the freshest local ingredients they can find. Bauer uses the Farm & Sparrow milling operation to supply All Souls with it’s standard pizza dough as well as milling other grains for the restaurant, such as bulgur, buckwheat, and polenta which is used by Reusing in many entrees but also used to make a polenta pizza crust, providing a gluten-free option for those looking for a suitable, fresh pizza experience.

Since opening the restaurant in 2013, Bauer has definitely felt the pressure of the additional workload to the millworks portion of Farm & Sparrow. There are times where the mill is running all day and night just to keep up with the demand of both the bakery and the restaurant, keeping Bauer somewhat bungeed to the mill, continuously having to be pulled back for another bag to be dumped, ground, sifted, sorted or filled. But, with the promise of another stone mill soon to arrive and plans in motion to move to a larger, better accommodating facility, there seems to be some light poking through the cloud of flour dust, and who knows, there may even be an opportunity for David Bauer to be able to be free from the blanket of flour that coats him, although I’m not sure he would want that, nor am I sure he would be recognizable without it.