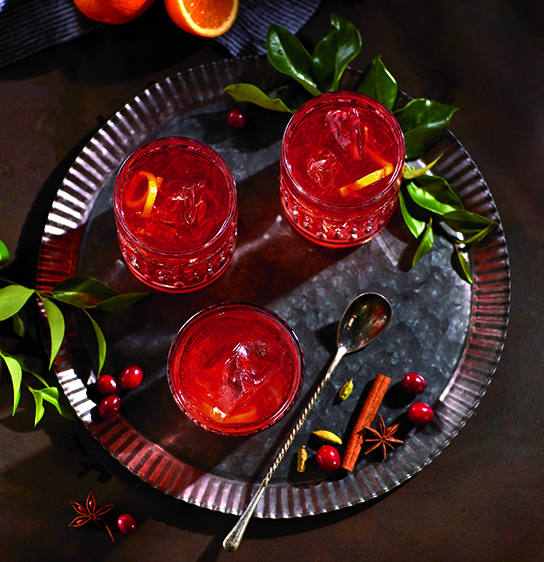 Through a nondescript wood door lighted by a single, wrought iron lamp, Micah LeMon and his staff pour their latest libations at James Beard award-nominated restaurant, The Alley Light, in Charlottesville, Virginia. Reminiscent of a speakeasy, the team works with Prohibition-level creativity to quench the ongoing cocktail renaissance. Cooler months usher in holidays with citrus at its peak. For LeMon, this means a cocktail is in order.

We’ve selected one of his stirred originals and our new favorite, the Dead Rosetti, to swill this time of year. “The orange spice bitters and cranberry cordial have notes of vanilla, cinnamon, clove, mace and cardamom that make this cocktail very much a spiced Manhattan riff,” LeMon adds in his tasting notes found in his new book, The Imbible.

As a bar manager with a personal inventory of eccentric plants pulled from his garden, LeMon enjoys working with seasonal ingredients. This remains true of the Dead Rosetti. “It works out neatly as cool weather is the best time to get fresh cranberries to make the cordial,” says LeMon in his book.

Though we associate the drink’s flavors with the fall holidays, the inspiration behind the recipe is its own brand of seasonal. According to LeMon, the drink stems from the third season of Boardwalk Empire, one of his favorite TV shows. Naturally, the character he pays tribute to is Gyp Rosetti, a whiskey-stealing Italian with a mean streak and a propensity to kill. Though this perfectly balanced drink shouldn’t lead anyone to murder, it’s spirit, bourbon, when combined with Campari, a sweet and bitter component, sweet cranberry cordial, and orange spice bitters creates complexity for the palate.

This cocktail requires a little planning and patience, but the concoction is worth the delay. The Dead Rosetti recipe calls for both a homemade cordial and bitters. While the cranberry cordial requires only minutes, well-done orange spice bitters demand 10 days to infuse. Upon adding, these components are similar to lengtheners but contribute more flavor, complexity and balance to the drink than a lone mixer. With the holidays just around the corner, make a batch of each to have on hand for last-minute drinks.

Stir and serve in a tumbler with a single large ice cube. Garnish with an orange twist.

Boil the first seven ingredients before simmering for 15 minutes. Add orange peels once removed from heat, and steep for 15 minutes. Strain, add brandy to cooled syrup and keep refrigerated for up to two months.

Add all ingredients, except the syrup, to a clean jar and infuse for 10 days. Strain. Add solid ingredients to saucepan, add water to cover, boil then cool the mixture. Allow cooled mixture to infuse for an additional 10 days. Combine and strain. Sweeten to taste with syrup.

Micah LeMon joined The Alley Light upon its opening in February 2014 and continues to work there as bar manager.  LeMon’s work has  been  called  “the source of some of Charlottesville’s finest cocktails”  by The Washington  Post.   Find LeMon’s latest thoughts on cocktails in his weekly column for C-Ville Weekly. His book about craft cocktails, The Imbible, was published in 2017.