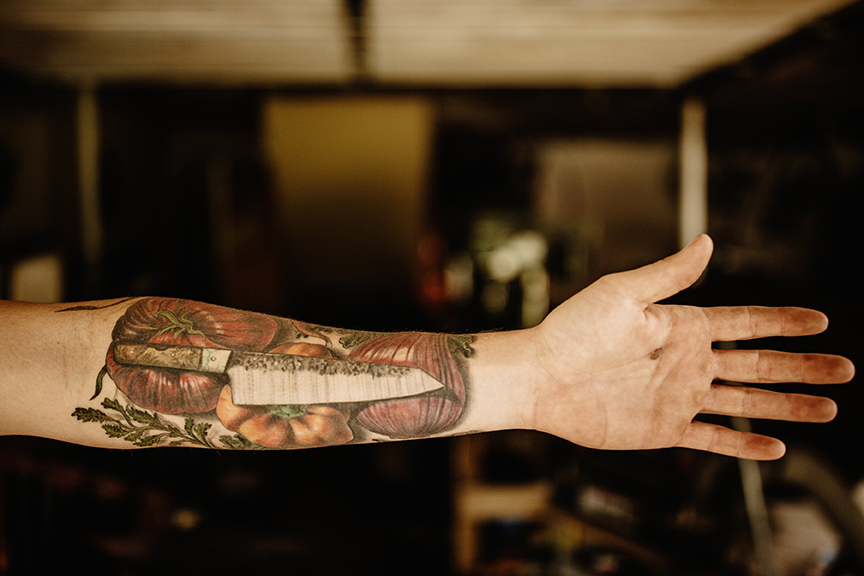 As they so often say, necessity is the mother of invention; and that was certainly true for Jared Thatcher as he tossed aside knife after knife when they’d dulled into uselessness during the course of fabricating a deer back in 2012. Breaking down a doe is a challenge in itself, but when your knife is actually working against you instead of for you, it can make that victorious hunt quickly turn into a frustration. But rather than sinking more money into bigger and “better” knives from various big-box manufacturers, the resourceful twenty-something did something quite enterprising—he scoured the web to find YouTube videos and read articles that could teach him how to forge his very own knives, using his Weber grill to fire-up his craft and ignite a new passion.

Initially begun as a hobby for Jared, whose suit-and-tie days spent as a financial advisor were in direct contrast to his love for the great outdoors, forging knives became an actual business a year later in 2010. It was then he and his wife Kylee started BootHill Blades from their home in Clarksville, Tennessee. The pair made a strong team, as both had background in finance, sharpening the business end of things even as Jared’s skilled craftsmanship made their products a great success.

Metal wasn’t his only medium of choice, however, and in an effort to break away from the hammer and heat, Jared picked up woodworking. The two crafts were complimentary being rustic in their roots and raw in presentation. As his knives grew in demand, Jared’s attentions were drawn to his knife craft and less time was available for BootHill’s wooden kitchen wares. Rather then scrapping the idea, Kylee took her turn at the workbench, diving deeper into the sawdust as she learned just how much skill her own two hands possessed for turning chunks of wood into functional works of art. “She’s really taken the woodworking side of the business to heights we never could have imagined, and most of it has happened through a process of trial and error until Kylee comes up with something she likes,” says Jared, who along with juggling the knives, keeps BootHill Blades’ social media presence sharp and heads up the marketing. “She’s the epitome of self-taught.”

As anyone can see from the beautiful knives and striking wooden pieces that BootHill creates, self-taught talent is often the strongest, as it is an inner passion that drives one to learn by doing. And both Jared and Kylee possess a wellspring of shared passion, creating a partnership that serves them well not only in business, but in life.

Having met on a blind date, the couple married in 2010 and now have two young daughters. The happy little family set down roots in Clarksville in 2012 after Jared and Kylee decided that the small-town environment would be perfect for raising their children. “We actually just picked Clarksville off a map and then went there,” says Jared. “We wanted a slower, friendlier environment for our kids, and that’s exactly what we found there.”

One might easily imagine that forging knives and carving wood requires farm acreage far away from the everyday noise of the modern world. But the Thatchers carved out their own little niche right in the midst of city life, their home and shop neatly settled in the normal neighborhoods of Clarksville, where the closest you’ll come to a cow is likely the burger you’re eating for lunch.

An unlikely setting, perhaps, but the couple made it work well for them. So well, in fact, it was the inspiration for the name of their company ‘BootHill’. “There was a hill right by our house lovingly referred to by the locals as ‘Boot Hill,’ because of the giant boot that used to be there when the area served as the headquarters for a major boot factory and manufacturing plant,” Kylee explains. “The boot was taken down a few years ago, but most of the locals still remember it. So we decided BootHill Blades had a nice ring to it and really seemed to pay tribute to the community of Clarksville.”

And there’s certainly a sense of community that arises from the work that they do, as their hands are the ones that create their pieces, turning raw materials not only into a product, but a personal connection to their customers. That, in and of itself, is one of the very reasons that Kylee and Jared love most about what they do—and one of the main things that’s led to their success.

We’re passionate about our work because it’s extremely rewarding to make something that people appreciate.

“We realize that a handmade knife or spoon might not be for everyone, but the people who do buy our products and use them everyday or give them as gifts value the care that goes into them and their uniqueness,” says Kylee, whose own love for uniqueness keeps her ever-inspired to try new things and create new designs.

“Many jobs out there are unfulfilling, but there’s a sense of completion and a pride that comes with finishing a piece. It’s rewarding in so many ways, especially when we have the opportunity to work directly with a client to create a custom item to their specifications—they receive something that once only existed in their imagination, and they’re usually blown away. That makes us feel like we’re doing something right, and it’s incredible to have that chance to build a relationship. That’s really been one of the best things about what we do,” Jared continues. “We set out to create something that our girls could be proud of one day, something that they could look back on and say, ‘My parents made that,’ and know the amount of hard work we put in to create that legacy for them.”

Legacy and heritage are something that people appreciate more and more, and society has noticeably taken a turn back toward the traditions that once made our communities strong. “Keeping craftsmanship-driven industry thriving is very, very important to our economy,” offers Kylee, who dusts off the wood shavings to oversee many of the day-to-day administrative workings of BootHill, including keeping the books, maintaining customer relations, and shipping out orders. “We feed back into the community in a way that big corporations can’t and play a crucial role in passing down the traditions and processes of craftsmanship to future generations. So many of those old processes have been forgotten or lost over the last century; but it’s important not to forget how things were originally done, and by whom.”

“I think people are moving back to an appreciation for heritage products with a story because they know what they’re getting, and they can be assured that the highest quality materials were used,” adds Jared. And indeed, they are. Having sharpened his rudimentary skills under the tutelage of such skilled knife makers as Cris Anderson, Luke Snyder of Bloodroot Blades, and Tom McLean of McLean North America, Jared forges each knife from non-stainless carbon steel, crafting the handles from recycled materials and woods that make each piece truly one of a kind. Much the same way, Kylee’s kitchen tools are ingrained with their very own unique attributes, each vein and marl shown off in their glory.

Plans for expansion recently led them to leave behind their home at the hill and move to the small town of Lafayette, Kentucky where they took on the project of renovating an antebellum house built in 1840. With acres of grape vineyards and orchards filled with pear, peach, and pecan trees, their vision for the land is to create a wedding venue over the next few years. For now, however, they continue to grow the company that bears their mark.

There is a pride that shines through in everything BootHill does—from the simplest spoon to the most elaborately handled knife. It’s a dream they’ve carved out and sharpened, a legacy they’ve planted. And as their own creations started on land where boots once stood, Jared and Kylee Thatcher are leaving footprints that will last long into the future.