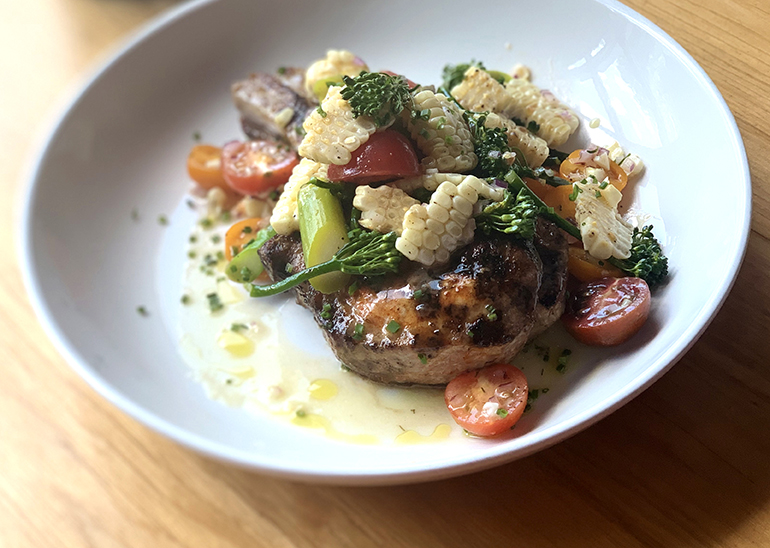 Growing up as the youngest of five kids, south Louisiana native Scott Serpas helped his mother cook family meals from an early age. His memories of eating the simple, yet flavorful and memorable meals his mother prepared in their kitchen – red beans, seafood, crawfish, po-boys and shrimp boils – were the inspiration for keeping his food simple at his self-named restaurant located in Atlanta’s Old Fourth Ward.  At Serpas, he has carved out a style all his own, pulling from those foods of his youth.  The simple “true food” he is known for has culminated in his approach to Southern food with a Louisiana flair combining Cajun, Southwestern and Asian cuisines and garnered national acclaim since its 2009 opening.

The seasonal ingredients grown by Atlanta’s local farmers throughout the summer season are his inspiration for this simple pork and vegetable dish. Serpas has created this “true food” take on the freshest produce and meat available from those farmers. While he prefers using Berkshire pork – a juicy, tender heritage pork which is heavily marbled with fat – he stresses as long as the pork and vegetables are fresh, you can’t go wrong. Simply prepared, this dish offers all the flavors of summer.

1. Bring all ingredients to a boil.

2. Allow brining liquid to cool before placing pork chops in the liquid.

4. Remove from liquid and pat dry.

5. Rub the pork chops with canola oil and season with salt and pepper or your favorite seasoning.

6. On a high heat grill and mark the pork chops cooking to desired temperature.

3. Remove from grill and pull husk off and clean silks from corn.

4. Cut the kernels off of the cob and set aside in bowl.

5. Blanch the asparagus and cut into 1½” angled pieces.

7. Add all vegetables to the bowl with the corn.

8. To the bowl of vegetables add just enough vinaigrette to coat the vegetables.

1. While grilling the pork chops, assemble the salad.

2. In a bowl add the first 6 ingredients and whisk together.

3. Slowly drizzle in the canola and olive oil while whisking very briskly until it is incorporated.

4. Pour small amount of vinaigrette over vegetables in bowl and gently toss.

CHEF SCOTT SERPAS South Louisiana native and executive chef Scott Serpas has a knack for carving out a style all his own, and his culinary charisma has culled attention from adoring diners and critics alike. From the prestigious James Beard Foundation to Gourmet, GQ and Food & Wine, this chef has garnered attention for his honest approach to Southern food with Louisiana flair. Scott has become an irreplaceable part of Atlanta’s culinary scene with Serpas True Food. Located in what was once a cotton storage facility in the heart of Atlanta’s culturally rich Old Fourth Ward neighborhood, Serpas is known for its “true food” approach to cuisine with an edge. The restaurant has received local and national acclaim since its January 2009 debut and was named one of the 10 “Best New Restaurants in America” in 2009 by GQ magazine.