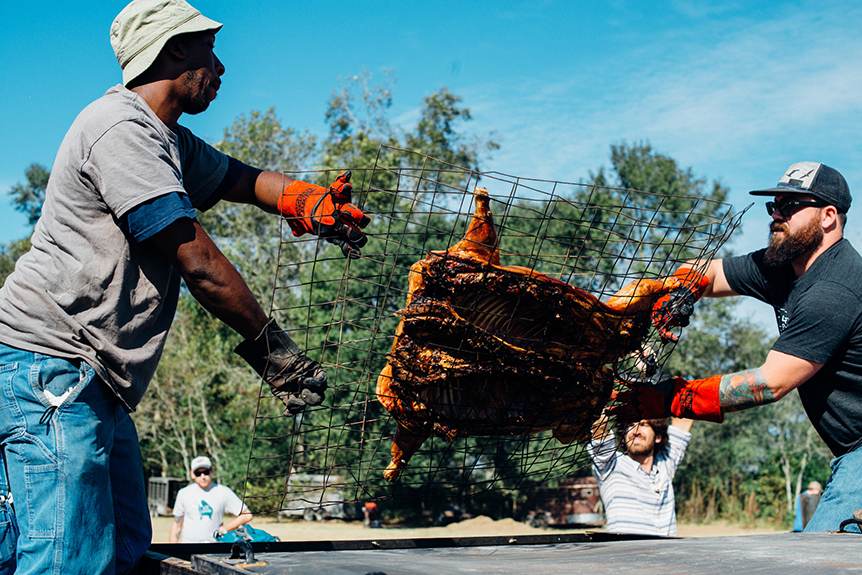 Food has consequences. To sustain our lives with nourishment, something else must perish. Plants are cut and harvested, animals are butchered. All of it comes to the table for our sustenance. It sounds like a clichéd trope, but the taking of life to sustain life is truly the “circle of life.” Over time we’ve lost touch with the consequences and the process. Meats are cut, trimmed, shrink-wrapped and placed in well lit, immaculately-clean display cases. Even the mildest forms of fabrication are hidden behind walls in the grocery store and the process is completely foreign to practically all shoppers, cooks and diners. Vegetables are presented in neat rows, glistening with mechanically-misted dew and sanitized of any soil or crawling little bugs. Fruit is sprayed with wax to make it shiny and appealing while lettuce is “triple rinsed.” This modern bounty can be purchased, cooked and eaten without any connection to the source. We vaguely know where our food comes from, but we choose to pretend that “steak” or “hamburger” or “sausage” sprang into being as ready-to-cook products and were not the result of any consequential actions.

[dropcap letter=”A”]ttending a boucherie, or butcher’s shop, changes that perspective and reminds us of the truth that food, indeed, has consequences. We must take the life of the hog if we want to enjoy our bacon or ham or sausage. It’s how we take that life that is honored in the boucherie tradition.

The Boucherie – Past and Present

The modern boucherie is a celebration of life, death, culture and food, but it didn’t start that way. Prior to widespread use of refrigeration, boucheries were community gatherings. When the fall arrived and the weather got cool enough to safely dress a hog, the farmer knew that his family couldn’t use all of the meat from that animal before it spoiled so, he would invite his neighbors to both assist in the process and share in the bounty.

The tradition slowly died off with the rise of commercial meat production and the expansion of refrigeration into every home. As the small, family farm became nearly extinct, so did the boucherie. But like other deeply-rooted traditions, the boucherie changed into something culturally relevant to a modern society. The boucherie became a way to honor the old ways and fight the disappearance of traditions.

Two friends in Lafayette, Louisiana saw another need that could benefit from expanding the practice. Toby Rodriguez (Lache Pas Boucherie et Cuisine) and Denny Culbert (Runaway Studios) attended a boucherie in New Orleans and marveled at the way the local chefs worked together at a common goal. There was none of the expected competition among the chefs who all worked at different establishments. Instead, the cooks collaborated to create modern takes on the traditional boucherie dishes and presented the fruits of their labor to a hungry and appreciative audience. So Toby and Denny decided that this type of thing was perfect for their hometown. That November the two of them found a great location in an open field near Grand Coteau, Louisiana and organized the first “Runaway Boucherie.” 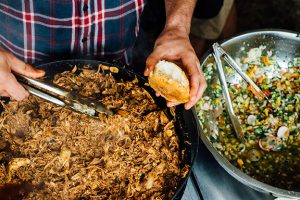 A View from the Boucherie Kitchen

The grounds of the Runaway Boucherie were set up like a small village – most of the freshly-mowed field was dotted with tents and anchored in the center with the giant tepee of accordion superstar and Grand Coteau native, Roddy Romero. Our campsite was hard to miss in that we had a fully furnished outdoor living room with a sofa, coffee table and a couple of recliners (purchased from the Carencro, Louisiana Goodwill Store). The west end of the field was anchored by the cooking and dining facilities. There was a pantry/scullery packed with fresh vegetables donated by area farmers and a giant commercial sink where volunteers washed the pots and utensils streaming out of the busy kitchen. Local architects had designed and built a structure that served as the bar and barbershop where Cathead Vodka, Bayou Teche Brewing and C. Wolf Barber & Shop provided libations, haircuts and straight razor shaves. Just to the north of there was the bustling kitchen tent where about 20 chefs at a time worked together to feed the 400-plus attendees for any given meal. Beyond the kitchen tent was the fire pit where poultry and sausage hung over the coals to slowly roast; the vertical rotisserie where Aaron Burgau (Patois, New Orleans) cooked a whole lamb or two; a myriad of BBQ grills and the Carolina BBQ pit where 3rd generation Pitmaster (and NASA scientist) Dr. Howard Conyers cooked two whole, small pigs. Just to the west of all this activity was the outdoor dining hall with seating for 300, a movie screen and stage for live music. We were like a little hipster town dedicated to the celebration of Acadian food and culture.

This was the only meal where Flash and I didn’t wind up working the line. While the crowd finished off their dinner and settled into watch “The Last of the Mohicans” on the big screen hung from the live music stage, I checked in with Howard Conyers to see if he needed any help with the overnight cooking of the small hogs on his pit. He was loading up the big steel barrel with hardwood for charcoal and said he was about to take a little nap and start the cooking around 11:00pm. I promised to check on him during the night, but he insisted that he had everything under control. I didn’t doubt him, but felt some sense of obligation to keep my word that I would check on him. I set my alarm for 3:00 am and settled into the giant tent we affectionately named the Taj Mahal. After what felt like only minutes, the alarm went off, I shook off the cobwebs and slouched into my jeans and sweatshirt, imbued with the familiar aroma of campfire smoke, stale beer and whiskey. After a dewy walk in the tranquil, sleepy field I found Howard sitting patiently by his pit. 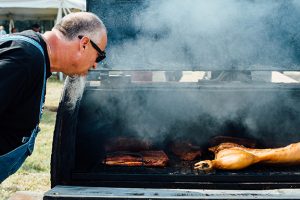 “I didn’t think I’d see you until breakfast.” he said. “You know, I’ve got this…you can go back to bed.” He said, amazed that I was awake.

“Can I at least get you anything? Coffee? Water? Whiskey? Beer? Gatorade?”

“Nah.” he said. “Beer and hogs don’t mix. Well, maybe you can bring me some Gatorade when you come back for breakfast.”

Relieved, I shuffled back to the tent where my niece Sarah and my friend Mandy were still sound asleep, never having noticed my waking, departing or returning.

A couple hours later I woke just as the sun was threatening its rise, bathing our little village in the field with mellow orange light. I grabbed a bottle of Gatorade from the big cooler and went back to shoot some video of the sunrise and check on Howard. The smell of the fat and smoke was intoxicating and Howard was happy to see me, or at least happy to see the Gatorade. We stood there in silence, breathing in the aromas of coffee and smoke while we watched the sun paint the sky in a million shades of orange, red, purple and yellow. We felt no need to say a word. Conversation only dilutes such beauty.

The pause to admire nature’s splendor was a short one. The next fifteen hours brought a whirlwind of non-stop prepping, fabricating, cooking, serving and cleaning. Dustie Latiolais of Henderson, Louisiana’s Crawfish Town USA recruited Flash and me to help assemble the scrambled eggs and brown-sugar-bacon jam biscuits that fed the hundreds of early risers. After breakfast and a few more pots of strong-as-sin “cowboy coffee” made from my little moka pot, we provided any requested assistance to the army of cooks as they prepared lunch and had a turn at leading the effort for part of one dish.

When Howard cooks hogs, nothing goes to waste. The organ-meat, head and feet are made into a slow-cooked hash that is usually served with steamed white rice. For a change of pace, I volunteered to make orecchiette (a bite-sized, hand formed pasta that takes its name from its shape of “little ears”) as the starch for the ham. A single, small serving of this pasta shape consists of about 20 individual pieces so we turned the operation into a cooking demonstration for about 30 people. The dough we made was a primitive style, made from only flour and water which thankfully meant it didn’t need to rest. That way, we could knead out the dough and get right to the tedious chore of pressing each pea-sized bit of dough in our palms to form the “little ears.” With many hands making light work, we pumped out a few hundred servings in less than two hours.

By midday, the crowd swelled to nearly 500 souls and the kitchen kicked into high gear and stayed there. By evening the hungry masses had consumed two hogs, a steer, two lamb and a flock of poultry, not to mention vats of gumbo and a farm’s worth of fresh vegetables. Once the kitchen fired up, it didn’t cool off until after midnight when post-concert revelers ate their final late-nite snacks after dancing to the Lost Bayou Ramblers under the starlight. 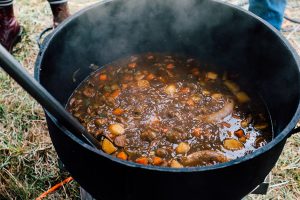 And the Rains Came

Sometime around 3:00 am I felt a little cool drip of water on my cheek. I neglected to check the weather before crashing for the night and ignored the warning of the “red sky at dawning.” With no rain-fly, there was nothing to stop the outside weather from coming inside the tent. I woke my tent-mates and we scurried around in the drizzle to get the outer layer of weather protection somewhat installed over our shelter. While we made our gallant effort to protect ourselves from the elements, we noticed that a young couple had found their way to our sofa and were sleeping under just a sheet in the rain. We tried to roust them so we could get them to relocate under the canopy tent and, much to our surprise, were met with a taste of Millennial hostility.

“Shut up and go away!” they griped when I tried to wake and move them.

We let them stay right where they were.

With the rain fly somewhat secured on the big tent, we managed to get a few more hours of sleep before making the executive decision to break camp and call off the rest of the day. The radar showed much heavier rains coming our way and no break in the precipitation for the next several hours.

The rest of the tent village started waking up with the heavier rains and gathering under the big kitchen tent to warm up with coffee and a big pot of grits.

Around 10:00 that morning, after much debate, Toby and Denny made the official call to cancel the remaining event. The rains weren’t going to let up, there wasn’t enough room under the tent for the cooking and the onlookers and even if they went ahead with the process, it was just too late in the day to get started. Just the prepping and cooking at a boucherie takes nearly nine hours so starting at noon instead of seven a.m. would push the eating late into the night. The cooks were willing to brave the weather, but time just wasn’t on their side. The cooks rallied to pull off an unplanned lunch of mostly vegetables and some of the left-over meat from the night before and hog, the sacrificial guest of honor, lived for another day.