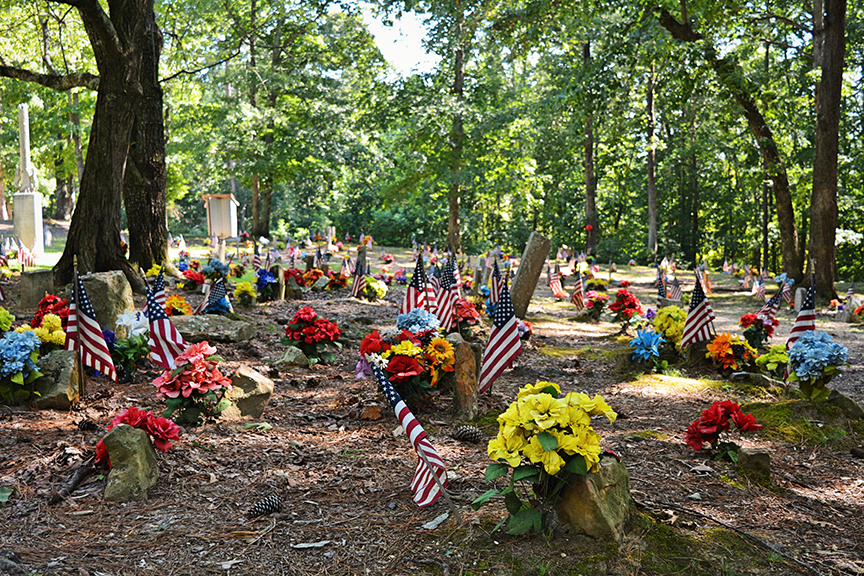 One of a Kind

Memorial to the Coon Dog

In the 1970’s, Southern Airways made daily, scheduled flights into and out of Vicksburg, their jets weren’t suited to the municipal runways of VKS so passengers like Tom Golding, flew in and out on vintage-looking Martin 4-0-4s or Fairchild-Swearingen Metroliners. Southern called itself the “Route of the Aristocrats” and gifted its passengers with commemorative shot glasses and an inflight magazine called The Southernaire. On a return flight form Atlanta, GA, which had about as many stops as a Greyhound Bus route, Mr. Golding read The Southernairecover to cover. In those pages he found a story about a coon dog cemetery nestled in a state wildlife management area just outside of Cherokee, Alabama.

[dropcap letter=”A”]fter a few Cutty Sark and waters (mixed undoubtedly with the commemorative shot glass) he started crafting a plan to weave his story into the fabric of this vaunted place. After all, having grown up in the Mississippi Delta, coon hunting and coon dogs were part of his life, his history and his family’s culture. This graveyard spoke to him in a place seated deep in his primal heart. The only problem was, he didn’t have a coon dog, much less a recently deceased one. But Tom Golding was a persistent man. Some might say “stubborn” in the pejorative while others might have used the plauditory “iron-willed” or “tenacious.”

The morning after his eureka moment in the skies over the green woods between Georgia and Mississippi, he walked into the office of Jack Branning and tossed the copy of The Southernaire on his friend’s desk proclaiming, “We need to bury a coon dog.”

Mr. Branning, knowing Mr. Golding as an adventurer and determined world traveler didn’t doubt his friend’s enthusiasm, but still asked the obvious question, “Do you happen to have a dead coon dog that I’m not aware of?”

Undeterred by the mere technicality of their deceased-pet deficiency, the two men expanded their circle of planning to include my father, Bill Ramsey. Dad remembered that his friend Crawford Mims had a great coon dog but they were unaware as to the physical condition of the beast. A quick phone call confirmed that indeed Crawford did have a particularly good coon dog and as luck would have it (not necessarily for the dog), it had recently yielded to old age. Trying to avoid insensitivity in their exuberance the men offered their condolences and an idea for a fitting tribute. Ol’ Red, they said, deserved to be buried in the foothills of the Cumberland Mountains in Colbert County, Alabama… among his peers. It didn’t take much convincing.

Over the next couple of weeks, plans were laid to make a funeral pilgrimage with Ol’ Red in tow. Pall bearers were selected, catering was arranged, Mississippi’s musical ambassador Paul Ott was commissioned to compose a ballad, hotels were booked, and programs were printed. Most importantly, Ol’ Red’s story was told to Key Underwood, the warden of the Coon Dog Cemetery and permission was granted to allow this Mississippi coon hound to rest eternally alongside Troop, Ranger, High Pocket and the other great coon hounds of Alabama.

My dad, being a master raconteur, was tasked with penning the eulogy for Ol’ Red and on March 11th, 1977, about two weeks after the first meeting in Jack Branning’s office, Dad, dressed in a long black coat, hip boots, a bandana prayer-shawl and a carbide miner’s cap, stood beside a freshly dug grave and tearfully spoke these words as Ol’ Red’s simple pine coffin was lowered into the Earth.

The solemnity of the occasion was not lost on the 125 or so men assembled at the grave. Although these gentlemen were roughhewn and weatherworn, nearly all were in tears as Paul Ott sang his dirge, accompanied by the anguished howls of the coon hounds in attendance. The revelry of the prior night’s wake at the banquet hall of the Florence, Alabama Holiday Inn had given way to respectful mourning and quiet contemplation.

After the service the mood lifted as strangers and friends alike shared tales of fierce boar coons, dogs full of heart and long nights in pursuit of game. A full “dinner on the ground” was laid out at the pavilion next to the graveyard and the celebration continued from there and late into the evening, following the out-oftowners back to their hospitality suite at the Holiday Inn.

One of the pallbearers, John Leigh Hyland had recorded the ceremony on a hand-held tape deck. The next day, on the way back home to Vicksburg he listened to it no less than four times. He never made it all the way through without crying.

On a hot August afternoon, I made the drive from Jackson, MS, up the Natchez Trace to Colbert County, AL. A small, brown sign pointed south from Highway 72 and read “Coon Dog Cemetery.” The sign led me down White Pike Road through the Freedom Hills Wildlife Management Area, past JR’s Goat Ranch and finally to Coon Dog Cemetery Road. After what seemed like a trek all the way back to Mississippi,

I came across a modest sign signaling my arrival at the Key Underwood Memorial Coon Dog Cemetery and Park. It’s not a big place – just a covered pavilion with some picnic tables, two outhouses and rows of coon dog gravesites, some with elaborate markers, others with just rocks or simple wooden crosses draped with dog collars. Each grave is decorated with plastic flowers (placed each year during the Labor Day Coon Dog Cemetery Festival) and most with American flags. Visitors, wanting to leave their own mark but showing restraint and respect have taken up the tradition of leaving coins atop the headstones.

It was the middle of the afternoon and I had the place to myself. It was peaceful, quiet and rustically beautiful. I lingered long enough to reflect on Key and the love he must have had for his faithful hunting companion Troop, the first coon dog interred at the spot where he spent so many evenings in pursuit of his favorite game. I thought about my connection with this place, with all the pets that gave me so much joy and all the people now absent from my life, but not from my story or my heart. I’m not prone to superstition, but I can’t deny the magic of this place. I think I’ll go back one day and take my sons.

Key Underwood never intended to start a coon dog cemetery. He and his family and friends had been coon hunting in the Freedom Hills Wildlife Management area for as long as he could remember and most evenings they began their hunt from the same spot. Everyone would meet up, unload their dogs from their kennels and head into the woods from the place where the cemetery now stands. In 1937, when his 15 year-old, faithful companion Troop died, he took his four-legged friend out to the woods and buried him in a spot he knew he would return to again and again. He picked up an old stone from the fallen chimney of a long forgotten cabin and placed it at the head of the freshly-covered grave. With nothing more than a hammer and screwdriver, he chipped away at the stone, carving a cross, the dog’s name and the dates of his birth and death. It was meant as a personal reminder of close friends, not as the bellwether of a famous attraction. As his friends lost their own coon dogs to time and incident alike, they asked Key if they could bury their friends next to Troop. Key said he felt uneasy granting folks permission to use land that didn’t belong to him, but thought that as long as they only let coon dogs get buried there, no one would mind. Key reluctantly became the warden of this curious, but noble spot. As the number of coon dogs expanded and the rest of the world started hearing about this special place, the State of Alabama declared it a landmark and a non-profit organization was established to ensure it maintained its integrity. Mr. Underwood made it very clear in a 1985 interview with Rheta Grimsley Johnson that only coon hounds should be interred with Troop.

“You must not know much about coon hunters and their dogs, if you think we would contaminate this burial place with poodles and lap dogs.”