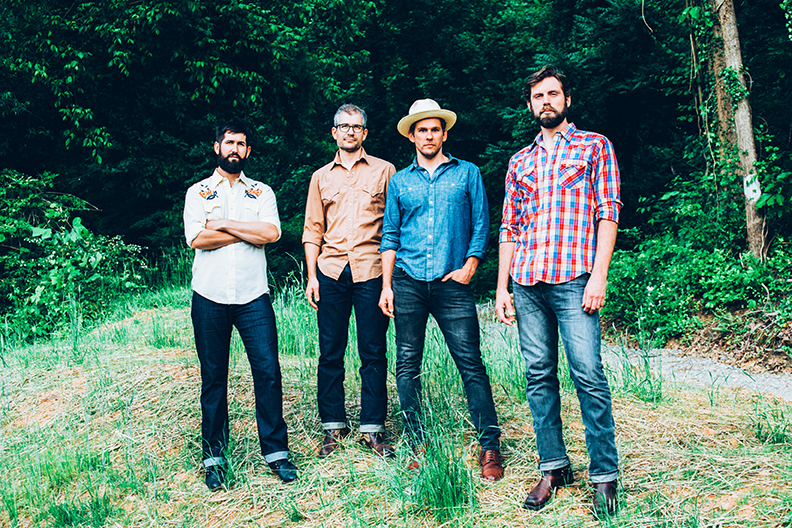 While listening to the title track from The Steel Wheels newest release, Wild As We Came Here, I’m suddenly transported to my car, windows down, traveling through the rolling blue hills of the Shenandoah Valley. I’m in touch with my surroundings and experiencing an almost aural peace provided by the steady banjo roll, a deep fiddle moan and thundering snare taps.

[dropcap letter=”G”]rowing up in Virginia, vocalist Trent Wagler began writing songs, drawing influence from the surrounding music of the mountains and folk troubadours like Townes Van Zandt and Doc Watson. Wagler decided to connect with a few musician friends to build a band around that sound he had grown to appreciate and, thus, The Steel Wheels were born.

“Brian (Dickel) and I played in a rock band together,” Wagler says of the band’s formation. “Eric (Brubaker), I knew played fiddle really well and was a good singer. I had sang in a choir with him when I was in college. Jay (Lapp), I ran into when he was playing with another friend as well. So we started that way. We just kind of put it together and played for a number of years picking up gigs wherever we could. Then, in about 2010 with our Red Wing album, we decided to quit our day jobs and see what happens.”

[perfectpullquote align=”full” bordertop=”false” cite=”” link=”” color=”” class=”” size=””]The Steel Wheels aren’t as overly concerned about fitting into a certain genre as they are about trying to keep the focus on the music itself.[/perfectpullquote]

At first listen, one definitely notices an inherent bluegrass sound but as you spend time getting to know each recording, the sound is far deeper than it suggests. The fact that two of the members were once in a punk rock band has little or nothing to do with the sound of their current group but you can hear the raw sense of urgency both musical styles share.

Perhaps that’s why they’d rather not be pigeonholed into a certain style of music.  “We’ve never looked to try to be a bluegrass band. In fact for the first few years we rebelled against that moniker. Being from Virginia, bluegrass has a very strict definition. We didn’t want people coming to our show looking for Earl Scruggs covers. At the same time, if you go to Portland, we might be the most bluegrass thing you could find. It’s a necessary evil of the music business to try to put things into categories to sell the music. It’s a somewhat nostalgic and innocent idea to think you could talk without musical genres and people will come out and explore and gravitate to what they like.”

It’s also worth noting that each member of The Steel Wheels was raised in Mennonite households. When asked if their religious upbring had any influence on them, Wagler responded, “Everybody’s upbringing has its unseen influences for sure but I think the most overt influence for us as a band has to do with the singing and the harmonies. One of the unique things we didn’t even realize was unique when we started was being drawn to three and four part harmonies pretty consistently and drawing that up into songs.”

Wagler explained further, “That is something that comes pretty naturally in the Mennonite community. In all of the churches we grew up in, there would have been pianos and musical instruments, but way back in some of the more conservative Mennonite communities, there would have been no musical instruments aloud so people sang parts. You learn very early how to sing harmonies. My dad and his three brothers had a gospel quartet and they would take to the church every Monday night for rehearsal and I grew up hanging around the church and listening to that music.”

Those nights spent with his father’s group had a definite influence on the vocalist, and the harmonious chords and progressions that made an impact can be heard throughout The Steel Wheels music. The group has grown from a band that played acoustic instruments around a single microphone to not being afraid to welcome drums and electric guitar into the studio, on their records or in their live shows.

The band took to the studio in October of 2016 to record Wild As We Came Here with producer Sam Kassirer (Josh Ritter, Langhorne Slim) and the intentions of not worrying about how the songs would be executed live, leaving themselves open to explore any musical direction they chose.

Once the studio time was secured, The Steel Wheels arrived with about 40 songs that they were able to downsize to the 10 they felt would best fit their latest offering. “For years we’ve had shows where someone comes up to the merch table and asks which album is our favorite,” Wagler recalls. “You tend to lean toward the most recent just because that’s the project you just worked on. I have no question in my mind that this new album is the best top-to-bottom, best songwriting, best production, and arrangements that we’ve ever made as a band.”

On the new record, The Steel Wheels lyrically address struggle and loss but also a sense of hope and togetherness. Stand out tracks on Wild As We Came Here include the Tom Waits-esque ‘Broken Mandolin,’ the soulful tent revival of ‘Scrape Me Off the Ceiling,’ and the haunting ‘Ghost of Myself.’ The final being inspired by an NPR story about a person realizing they were showing early signs of dementia. After Wagler witnessed his own grandfather’s struggles transitioning from everyday life to living with Alzheimer’s, the story struck a chord.

“In my own selfish sense of thinking about, what if I had dementia, I’ve often comforted myself with, ‘Well, I guess I wouldn’t know.’” Wagler continues, “I think aging to some extent has a lot to do with coming to terms with our own flaws and the flawed world around us.” He continues, “What I love about the way the song came together is there are elements to the production that helped to build ghost atmosphere but it’s pretty unadorned. It’s not one of the songs that ended up with a lot of percussion although there is a marimba track that comes in the choruses that’s very ghostly.”

So, put them under the vast Americana umbrella or call them bluegrass if you will but when stripped down to bare bones, The Steel Wheels are a shining example of American roots music with their core rooted firmly in making the music they love.

Their new album “Over The Trees” releases July 12. We’re thrilled to be able to share a song from the new album – Time To Rest. Band member Trent Wagler has this to say about it: “Co-written with Sarah Siskind…this is a song asking for forgiveness, mercy, or really just rest. Relationship is hard. And letting each other down is human. But it’s always messy. Sometimes the most powerful thing we can do for each other is acknowledge the loss and allow for space for that loss to heal. Acknowledging how I’ve let people down in my life is perhaps one of the hardest knocks to my ego. This song is an apology and asks: will I still be accepted after I admit to my wrongdoing?”

Listen to their new song – Time to Rest. 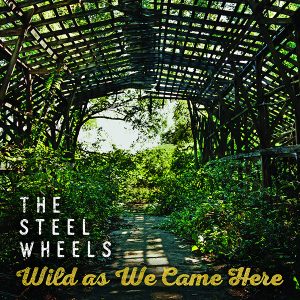 Watch the video for Scrape Me Off the Ceiling from their album, Wild As We Came Here