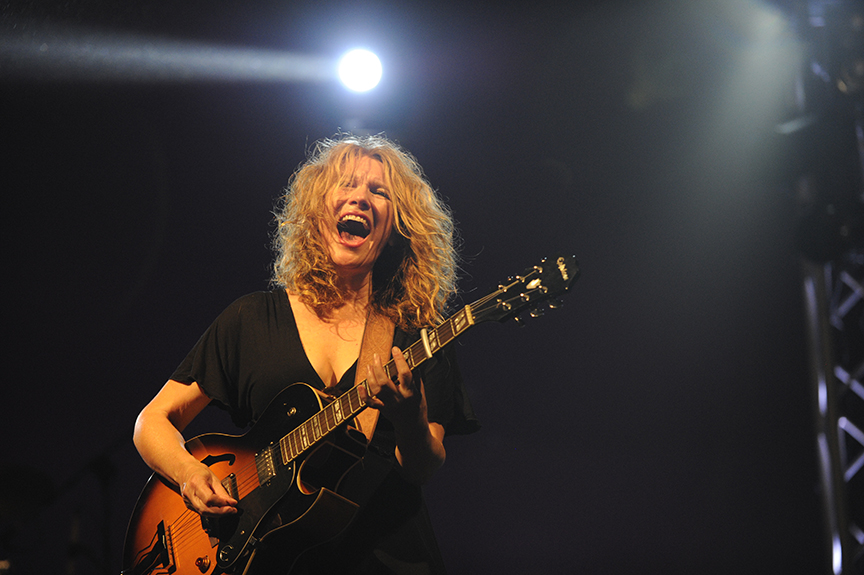 Hattiesburg Native Lisa Mills Takes Her Roots, Blues, & Gospel Music From The Gulf Coast To Stages Across The Uk & Europe.

She slides onto her perch in the corner and checks the tuning on her arch top guitar. The house concert audience is curious, most of them haven’t heard her; they are here on enthusiastic word of mouth. She greets the intimate crowd and then launches into a song from her 2014 album I’m Changing. The sheer power in her voice ends any small talk in the room. Everyone is riveted on the singer they had heard about only a few weeks before. As she reaches the end of the song her voice rises and she leans back from the mic so as not to overwhelm the simple PA system.

Her voice is a thing of wonder, a force all its own. She can go from a whisper to a roar and back again as the song needs. The authority of her voice never obscures her sense of nuance. It is by turns confident and vulnerable, sultry and sweet, battered but not broken. Yet the most amazing thing about her singing is its naturalness. At the meet and greet after her second set it is clear she has made a lasting impression. As the crowd files out, the reaction is unanimous, words like “stunning” and “amazing” heard time and again.

Lisa Mills’ journey started in Hattiesburg, Mississippi. “Born and raised,” she says, smiling. “Mama’s family was mostly from Columbia, Mississippi. Daddy was born in New Orleans.” Music and singing came early for Mills. “Daddy played some guitar, pretty much old traditional country songs. After church, the family often gathered around the piano at my uncle Shelby’s house. It was just in the air everywhere when I was growing up.”

In her early years Mills’ parents, David and Jan Powell, moved the family around a lot. “Daddy was a free spirit, which I think he got honestly. He is part Choctaw Indian. He is a jack-of-all-trades kinda guy. He left us when I was nine.” Lisa, her mother, and her two younger brothers settled back in Hattiesburg to be near family. Jan Powell worked a series of odd jobs to keep food on the table. The family struggled. Eventually she landed a job as a waitress at the Ramada Inn, bringing some stability home along with a humble, albeit steady, income.

Daddy leaving impacted me profoundly. He was the most like me, creative, artistic. As a result of that event I have become this weird combination; a mixture of a hyper-responsible adult with a sense of wanderlust. Over the years, I began to I realize one of the threads that ran through my songs goes back to that time in my life. I have been searching for my father. Music became a vehicle to express my sense of longing for connection.

Singing came naturally for Mills. “I was trotted out to provide entertainment for guests and at family gatherings. I sang in church. We used to have a flatbed trailer in the back yard that I used as a stage. I would hop up there and sing for my cousins and for the neighbor kids. Singing and storytelling. When I was a kid I wanted to lose my southern accent, and become exotic.” Along the way she received encouragement from friends and from teachers in school, but her first real sense of validation came when she was fourteen.

“Mama had worked her way up to manager at the Ramada. They had a band playing there in the lounge, a rock group from Florida. Maggie, the chef, convinced them to let me sit in with them for one song. So, that was a big moment for me, up there singing ‘Blue Eyes Crying in the Rain.’” Even though country music, and country gospel was a large part of her world, Mills began to be drawn by a different sound.

“I love and respect country music, but it doesn’t move me the way blues, and especially black gospel music does. Etta James, Mavis Staples, Dorothy Moore all speak directly to my soul. I had the good fortune to meet Dorothy Moore once. She came to one of my gigs and she complimented me on my cover of an old Etta James song. Dorothy said, ‘My good friend Etta would have loved you.’ It made my day.” It was blues and gospel that would become the foundation of Mills’ sound, and would bring her to the attention of Sam Andrew.

Mills began to play music in clubs. The owner of a little club named Spicey’s in Pascagoula took an interest in her talent. He paid someone to record her live gig, and released it locally as Blues and Ballads. The record was bought by someone connected to Sam Andrew of Big Brother and the Holding Company fame. Soon Andrew was calling.

“I wasn’t really familiar with them. I had never really listened to Janis Joplin, although I had heard of her. I think that ignorance kept me from feeling overwhelmed.” From 2000-2003 Mills toured extensively with BBHC in the States and abroad. That experience served as both an education and a launching pad for Mills as a solo artist. As a result of touring with BBHC, Mills made contacts in the UK that led to the release of her first solo album.

The first incarnation of the album I’m Changing was released in 2005. Mills was joined by the legendary bassist Ian Jennings (Van Morrison, Ray Davies, Big Town Playboys). Jennings would return for Mills’ 2011 release Tempered in Fire, and bring with him guitarist Andy Fairweather Low (Bill Wyman, Roger Waters, Eric Clapton). It was a heady time.

Nine years later Mills would return to her first love, I’m Changing, adding a couple of new original compositions. “I was playing a gig in New York and was approached at the merch table by someone wanting the album. It had been out of print for a few years. When I got home I decided to go back to the raw tracks. What I found was really encouraging. I was surprised at how good they sounded.”

A loan from a friend gave Mills what she needed to go back in the studio and cut some additional tracks. Once done, Mills turned to a Kickstarter campaign to get the album finished. The final result was ten stellar original songs and two covers, the Rev. Robert Wilkins’ “I Wish I Was in Heaven Sitting Down” and “Little Wing” by Jimi Hendrix. The vocal performance on the Hendrix song is worth the price of admission alone. But the original numbers stand proudly side by side with the covers, a testament to the maturity of Mills’ songwriting.

To finish the album Mills hired Grammy winning sound engineer Trina Shoemaker. When Mills released I’m Changing in 2014 the record received glowing reviews. Shoemaker would return in 2016 as producer for Mills’ next album, Mama’s Juke Book. This time out, Mills would create a tribute to her mother that was deeply personal and yet contained only one original song. For this outing Mills would be joined by Spencer Bohren on lap steel, and Mike Finnigan (Etta James, Taj Mahal, and Bonnie Raitt) on B3.

A few years back, after my mom passed, I was going through her things. I came across this battered spiral note book. When I opened it, I was taken back by what I found. Mama had filled the notebook with the lyrics to her favorite songs. It was all there, in her own handwriting. All the stuff that moved her heart.

“Songs by Conway Twitty, Dolly Parton, Buck Owens, and Elvis Presley. Mama never remarried after daddy left. She always said it would be unfair to us kids. As I leafed through the notebook I came upon this one poem, “A Song of Love.” It was something my mama wrote to this person she was in love with. They could never be together because he was with another.” Mills wrote music for the poem, giving a voice to her mother’s words posthumously. It is the closing number on the album.

Mills works the Gulf Coast circuit with the fierceness and dedication of a “self-employed balladeer” as she likes to say. She has appeared on Mississippi Public Television’s “Amped and Wired” and “Live from Avalon” on Alabama Public Television. Across the pond her fan base continues to grow. She is in high demand on the European festival scene as a blues and roots artist. She is a prolific writer, with close to fifty songs in various degrees of completion.

The summer concert season looks to be a busy one. In July, at the Freiburg Zelt-Musik-Festival Mills will be performing Gershwin songs with a Symphony Orchestra for the first time. More shows in that series are in the pipeline. She makes her third appearance at Edinburgh Jazz and Blues Festival and the Summertyne Americana Festival and returns for a second year to The Great British Rhythm & Blues Festival.

What does the future hold for Lisa Mills? Presently she is in the initial stages of designing a concept album that focuses on her southern roots. Though it is early in its development, Mills is working with renowned producer Fred Mollin on a plan focused on three legendary landmarks: Malaco (Records), Memphis, and Muscle Shoals. “It’s sort of a musical road trip that pulls together all the threads that form my sound,”

Mills says. The plan is to film a documentary of the making of the album. Rollin has produced a who’s who of music royalty including artists Jimmy Webb, Johnny Mathis, Kris Kristofferson, and JD Souther. The vision for the project is starting to gel, and there is some talk of beginning, when Mills returns from Europe.

“Daddy used to say that there was something about Mississippi that always brings me back.” It is a truth exemplified by Mills’ own voice, one that is rooted in a specific place, in the fertile soil of the Deep South. She is excited about the summer tour and the upcoming project. But then, that is when the sense of responsibility kicks in. “As mama used to say, ‘I gotta’ go to work and make some milk money.’”