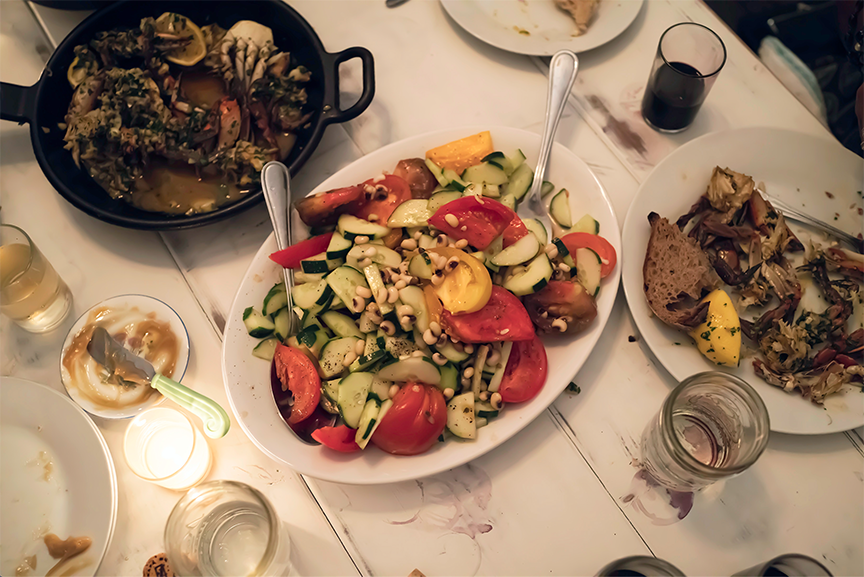 In the last throws of a hot and humid New Orleans summer, Melissa Martin is busy in a sweltering kitchen with the final preparations for the supper we are here to enjoy later this evening. Upon entering the house we are met with the intoxicating aromas of garlic mixed with the Holy Trinity of Cajun cooking – onions, bell peppers and celery. Around the kitchen, tubs of fresh crabs and shrimp await their fate. A large pot of pureed okra, cooked slowly for 12 hours, sits on the table waiting to be mixed with shrimp for the gumbo.

[dropcap letter=”A”]nticipation of the meal being prepared in front of us is growing. Melissa explains that the entire menu of the Mosquito Supper Club consists of foods from her childhood. “We only serve recipes from my family. It’s the same things my mom or grandma would cook – Cajun food, cooked exactly the way I was taught. I think that’s really important. We really wanted to create an atmosphere of slow, easy eating, where people could get to know each other.”

Before starting the supper club Melissa was looking to change her hectic career as a restaurant chef to one that cooked for smaller groups. It was important to her to be able to showcase her culinary skills while cooking the foods of Louisiana. Cajun, not Creole was the first distinction she made. Her cuisine is country Cajun, unlike the Creole (tomato based) cuisine also popular in the NOLA area. Being born and raised in a poor area of south Louisiana – Chauvin – she was brought up respecting the fishermen bringing their harvest from the gulf. “We were raised poor, but we ate like kings,” she remembers. “Our family fished, hunted and gardened everything.”

With time to kill before dinner we left, allowing Melissa to make final preparations. We quickly walked the two blocks to St. Charles Ave., to the beautiful Columns Hotel, for a cocktail before dinner. Supper club is BYOB so as we walked back to the house we stopped in to one of the premier liquor stores in NOLA, Martin’s, where a huge selection of wines is offered. Purchases in hand, we headed back for a truly unforgettable evening.

Guests began arriving at 7:30 from as far away as Chicago, New York, Austin, TX, Murfreesboro, TN, Oxford, MS, as well as NOLA. They made their way to the back patio, where the evening began with mint juleps made with Steen’s cane syrup, bourbon, mint, and crushed ice. An oyster bar was set up with fresh shucked oysters waiting to be dressed with traditional condiments – horseradish, lemon, cocktail sauce and saltines.

Moving inside for the first course, we were seated on benches at one of three long tables that stretched through the rooms of the house. Hot baked rolls made from locally milled heritage grain flour served with butter sweetened with Louisiana made Steen’s syrup waited for us on the tables. Delicious shrimp boulettes were passed in black cast iron skillets. Don’t confuse these fried boulettes with hushpuppies. Ground shrimp is used instead of cornmeal to hold their shape. They were also one of Melissa’s favorites growing up.

I wanted it to feel like a Sunday supper where you come in and sit down at a big table, family style.

Bowls of steaming okra and shrimp gumbo with rice were placed in front of us. The taste attained by slow cooking the okra for 12 hours was deep and smoky while maintaining a simple rustic flavor. Then came the crabs in a pot of garlic butter – boiled, pan fried, then roasted. It goes without saying, “Fresh is always best.” Bottles of wine kept the conversation between strangers moving while Billie Holiday serenaded us from the turntable.

Belts were loosened as the beautiful tray of dessert arrived at our table – blackberry dumplings with Pop Rouge ice cream. This recipe holds a special memory for Melissa. Growing up, her family sold boulettes and blackberry dumplings at an annual fall festival that raised money for Chauvin’s St. Joseph’s Catholic Church. Her family was known for these offerings at the fair, but in particular their Pop Rouge ice cream that got its name from the bright red strawberry soda that was made in Abbeville, Louisiana. The soda is no longer available and sadly, neither is the festival – a bishop felt the event had gotten out of hand and put an end to it. These days Melissa uses strawberry cream soda to make her family’s signature ice cream.

With Mosquito Supper Club, Melissa Martin has successfully created the dining experience she longed for – an old-fashioned family style meal celebrating the local seafood and produce of southern Louisiana and respect for the traditions of her Cajun cuisine and of her ancestors. Each of her dishes allows you to taste the history of that Cajun food.

Supper is offered Thursdays, September-May. Reservations for each supper are limited to 24 in a lovely old neighborhood home at 3824 Dryades Street, New Orleans. Visit their web site for more details.