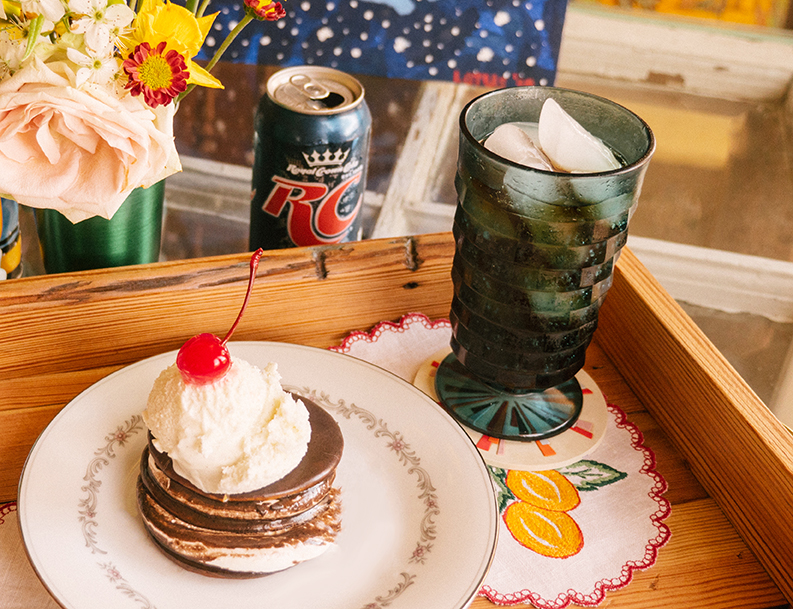 Fly Me to the Moon Pie, Ruby

I have just returned from a visit to my hometown’s Piggly Wiggly— the queen of grocery stores known to most Southerners – and I shall be forever in awe of simply for the long gone moments recalled there.

Many a time I was sent to “The Pig” to fetch my Momma’s preferred mentholated cigarette brand and even once, as a kid, peed my britches there, subsequently earning a deafening “Clean up on aisle four” in my poor tender ears and a wounded psyche for years to come! I still go back often for nostalgic reasons and practical ones, too. I like that it’s small, parking is easy, and it’s even peaceful – crazy as that sounds – it’s a cinch to navigate and dean good prices. That may sound like an advertisement but it’s not; it’s just a ringing endorsement for “The Pig”!

“The Pig” I shop at plays a lot of contemporary late 80s and early 90’s pop and jazzy music over the store’s sound system like Whitney Houston’s “I Want To Dance With Somebody” or George Michael’s “Faith”. It always puts me in a good mood and I can’t help it sometimes but to do a little dance or subconsciously fall pray to the “jiggy shoulder.” That’s what I call it when your shoulder is mysteriously set in motion without thinking and starts moving up and down to the beat of the music. It is most impressive to many. Until recently I always thought that seeing me possessed by the “jiggy shoulder” was the tipping point for my wife to confirm that she was madly in love with me. She has since straightened me out and said it was actually when I whistled the tune “The Star Spangled Banner” over the top of the mouth of a cheap beer bottle! “For the land of the free and the home of the brave,” she still melts for me to this day. Ha!

So, back to “The Pig”. While I’m there on this particular visit, trading for the finer things in life like Camellia red beans, Zapo’s tater chips (Voo Doo flavor of course) and Goldfish, a song by the Fine Young Cannibals starts playing overhead. As they sing “She Drives Me Crazy”, I happen to notice a large cardboard Moon Pie station. I mean they had every kind of Moon Pie you could imagine; chocolate, vanilla, strawberry, banana and double-deckers! They even had miniature versions. The song and the Moon Pies took me back to a time when my best friend and I were both in about the 8th grade. We used to argue over the lyrics of “She Drives Me Crazy.” Even to this day Steven Rankin swears the lyrics are “She drives me crazy that long blonde hair!” He is still wrong. It’s “She drives me crazy, like no one else.” I know – I Googled the truth.

I WANT TO LOVE YOU, I WANT TO PASS IT ON, I WANT TO GIVE AND GIVE, UNTIL IT’S ALL GONE. I WANT TO KNOW YOU WHILE WE HAVE THE TIME BECAUSE THAT’S ALL I GOT TO LEAVE BEHIND
On The Dark Side Of The Moon, Lyrics By Chris Staples

Come with me for a bit and let’s be flies on the wall of what seems like just yesterday. Cue the hackneyed flashback sound of a harp arpeggiating back and forth dreamily.

“Heavens to mergatroid!” Snagglepuss, the cartoon mountain lion roared out on the TV. Steven had changed the channel just in the nick of time and Snagglepuss’ words were my sentiments exactly. It was one day after school and we were sitting in his grandmother Ruby Rankin’s living room. I proudly claimed Mrs. Ruby as my “second” grandmother. Moments before we had been watching MTV (that was when MTV actually played music videos) right before Mrs. Ruby waltzed in carrying a tray with two small plates and RC Colas. On the plates were what I would now call “the bomb.com”. It was ooey-gooey goodness – warm chocolate Moon Pies topped with vanilla ice cream.

Tattoo, Steven’s miniature poodle had warned us moments before of Mrs. Ruby’s approach with his impeccable timing by yapping and whining. Right before she walked into the room, Steven had changed the channel – the video for Chris Isaak’s song “Wicked Game” was playing. Imagine being a 14-year old boy watching, in my opinion, still the most provocative video ever made – a dreamy black and white video with a beautiful model in a bathing suit rolling around on a sandy beach. We were mesmerized to say the least! I still can’t look at a Sports llustrated swimsuit edition without turning Yazoo clay red from embarrassment.

As Mrs. Ruby sat down the tray, I was nervously over-talking saying “thank you, thank you, thank you” like I had been caught doing something I shouldn’t be doing. I even started saying thank you out loud in as many different languages as I could think of that I had learned from my brother. “Dank u, grazie, mahalo, danke schön” I exclaimed. Then Steven turns to me chiming in and says “Grassyass”. Mrs Ruby said “Steven! Lord have mercy”! Mrs. Ruby just smiled knowingly and said “Uh huh! Y’all eat up because you momma will be here soon to pick y’all up.”

I fondly remember Mrs. Ruby’s incredibly sweet smile and enduring laugh as she watched us devour those Moon Pies and down the RC Colas! She was the most giving and selfless person I have ever known and filled our lives with so much goodness. Dear Mrs. Ruby Rankin was called home this past November at the age of 93. In my mind she was a perfect picture of elegance and grace – the most wonderful of (second) Grandmothers in the whole wide world that blessed anyone who ever knew her. Her whole life was devoted to giving back to the community and loving on her family. The best there is.

Now a flashback like this triggers good things and sometimes makes me want to recreate as much as I can. So I purchased a chocolate double-decker Moon Pie, RC Cola, some vanilla ice cream and a small jar of maraschino cherries to throw on top just for fun. As I was checking out I asked the cashier “Do you have any good memories that remind you of growing up?” She smiled and shared a quick story of her aunt making root beer floats for her and her sister. That warm fuzzy feeling came over me again and as I looked her in the eyes it wasn’t like looking at a stranger at all. When she handed me the receipt I said, “Thanks, Ruby”. I swear on a jar of Duke’s mayonnaise her name was Ruby Dale. I can’t make stuff up like that. But the real kicker came as I was walking out of Piggly Wiggly all proud like a lion because it felt like I had just been in a real life play written just for me. I began to hear the intro to Frank Sinatra’s “Fly Me To The Moon” playing overhead. I almost dropped my groceries and said out loud “What the heck is going on here?”

But these days I don’t question happenings like that. I just silently marvel at it all and revel in the fact that I am alive in the most incredible of times. Fly me to the Moon Pie, Ruby!