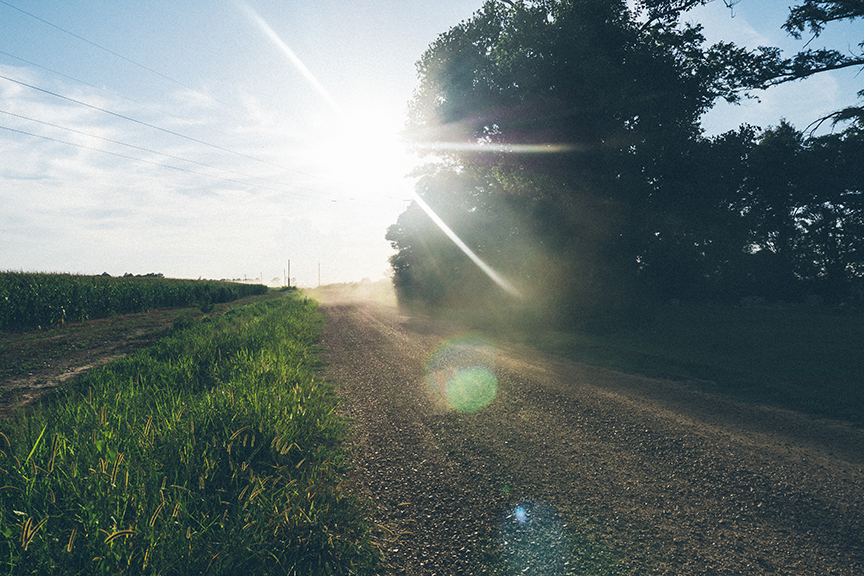 The Vanishing Point or “No Way, Jose”

I listen to the radio a lot when I’m driving. My job can send me all over the state of Mississippi, state to state lines sometimes. I usually try to tune in to AM radio when I’m in rural areas just to hear what the locals might be listening to. It’s usually a lot of talk radio of some guys discussing politics or some preacher giving a sermon on how you can’t out-give God. I always think everyone knows that right? I guess some times we just need to be reminded over and over. Now what I’m really hoping to come across is an authentic blues station. There is a nostalgic sound I hear in static waves coming through from an AM station. The blues lyric “when you see me laughing, I’m laughing just to keep from crying” puts a lump in the back of my throat and gives me that heavy feeling like oh man, I been there before!

[dropcap letter=”T”]here was this one particular autumn day last year when I was driving around way up near Clarksdale. I had already finished my job for the day and didn’t have to be back till the next day, so I went exploring. I have what I call explorers blood, where I like to go and see something I’ve never seen before, for the story or to find something interesting to photograph. Sometimes experiencing a place with its different smells, sounds and looks can conjure up some serious memories. Now don’t get me wrong I’m not some thrill seeking mountain climber willing to go to the far ends of the world. [perfectpullquote align=”full” bordertop=”false” cite=”” link=”” color=”” class=”” size=””]I just like to go wandering significantly off the beaten path to see what I can see and where it might take me. Sometimes I find a new perspective on life, to think about how I see life, if the glass is half full or empty kind of thing.[/perfectpullquote]

Well this day there was a super abundance of precipitation in the air. I had just finished lunch fajitas at a restaurant called, I kid you not, “No Way Jose”, and thought I just need to go exploring. So I started driving way out into the county. Then the bottom fell out! I mean a good’un. I could hardly see where I was going. By this time I was really far out down a road I had never taken before. All I could think was “it’s starting to flood over the roads in places and that saying “turn around don’t drown” was starting to become a bad song stuck in my head. The radio station was washed out and all you could hear was a nasty ear piercing static with the occasional blues guitar riff sneaking in. Well sometimes in the Delta a storm will come up and the next thing you know you are in the dry, just staring at overcast clouds rolling out like it was just a big tease. I’ve heard it called God’s choir rehearsal. Well anyway, this storm did just that and I was left with a complete stillness on the Delta landscape.

There is a term called the vanishing point. It’s the point in the horizon where everything seems to disappear kind of like seeing the telephone poles get smaller and dissolve into that point that goes into infinity. This is where I was, on this road with no one around. I pulled over on the muddy shoulder and got out of my car. I was there; the vanishing point. All these thoughts came flooding to my mind about where I was in life and I even started thinking a little darker thoughts like, where did my years and younger self go. It was a strange feeling to be out miles from any civilization, totally alone, with just the static of the AM radio. I looked back down the road the opposite way and there was another vanishing point staring back at me. I felt an intense sadness and emotional emptiness for a brief moment. I was mostly missing my dear mom who had passed. It’s really heavy to realize that both my parents are gone and there is nothing to say or do about it. I’m really at peace about it but it was almost like being in the Mississippi twilight zone. And then I said out loud “No way, Jose!”

Right then a completely bizarre story came to my mind that made me laugh out loud because I hadn’t thought of it in quite a while. It was like a gift that showed up in the nick of time to make me not feel so out of sorts. This story is from my friend Daniel. Seems his sister and brother-in-law, John, had just had a baby. John was the foreman over a construction crew. One day he wanted to feed his whole crew lunch as a gift of appreciation for a baby crib the crew had made for them. So John came home early that day to get all the ingredients to make fajitas for his crew. The only thing he did not have time for was to go to the store for the meat so he grabbed what he thought was frozen hamburger meat from his deep-freeze. Well all was going fine until it came time to cook that meat at the job site. It seemed and looked very different from regular ground beef. But one of the crew, whose name just so happened to really be Jose, was helping with the cooking and said that “he could make any meat taste great” because he cooks for a lot of people all the time. Well everyone ate their fajitas, but many commented that something wasn’t quite right, one worker even said “it looked like alien meat but tasted like chicken”. Well come to find out later that night as John was putting the baby down to sleep he asked his wife “Where did you get that meat from that was in the deep-freeze?” She quickly raised up out of the bed and ran to the deep freezer in their garage. She came back into the room slowly and said to John “Honey I think you fed the crew my placenta that the hospital sent us home with!” Holy moly! And that is exactly what had happened.

I couldn’t believe it myself when Daniel told me this but I looked it up and apparently it is a real thing that people are doing these days, saving the afterbirth to dry into powder form pills, to make vitamins out of. But good Lord have mercy what an unfortunate mix up this was. I mean how in the world??

After this came to my mind I started laughing at where I was. Standing in the middle of the Mississippi Delta thinking I was at the vanishing point when really it was a starting point to look all around at what there is. The realness of perspective – that the glass is both half full and half empty. It’s filled with some tears and divine waters that keep us alive and the emptiness is only an illusion of negative space and thoughts that creep in if you let it but there is always a memory that can combat it. That’s excellent for me. It’s a ravishing display of a thunderstorm that quickly fades away, it’s an old friend that lives on in our hearts, the memories of loved ones that have gone on before us and a sunset so beautiful you feel the meaning of what it is to find your own crossroads. The vanishing point? No Way, Jose.

Written and photographed by Matthew Magee