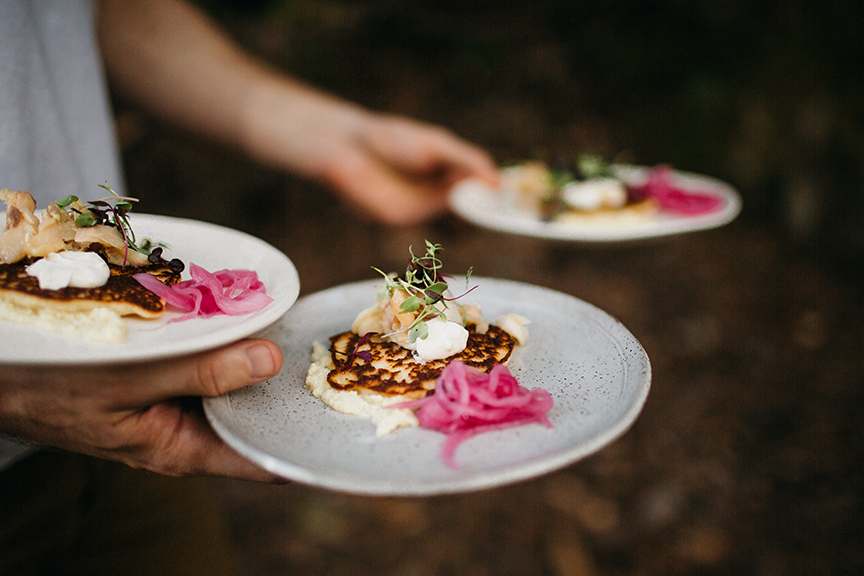 Near a cascading waterfall at Lula Lake on Lookout Mountain, Georgia, a long stretch of rustic gray wooden tables is tucked in a blissfully shady corridor between two high rock walls, waiting for the 150 guests who’ll be here soon. Late-afternoon shadows and patches of sun bathe the metallic gold tableware, bottles of wine, and rectangular boxes of fresh hydrangeas, roses and zinnias in a romantic light.

The air here feels 10 degrees cooler than in the sweltering valley below, a fact that has not gone unnoticed by Erik Niel, a New Orleans native and chef-owner of Easy Bistro & Bar, a 12-year-old seafood landmark in downtown Chattanooga, about a half-hour away. “Summer is always hard,” says Niel, who co-founded the Scenic City Supper Club with his wife Amanda in 2015. “And although it is hot, it is not brutally hot. Plus, this is just an amazingly beautiful place.”

Nearby, supporting chefs from seven area eateries pluck feathery dill weed from its stems for tonight’s second course, Gulf Shrimp West Indies Salad, which will be served with slivers of sugar baby melon and tiny halved green tomatoes. Several cooks prepare mustard-yellow curry barbecue oysters for roasting on a grill overlooking the plunge pool and creek, while others add dollops of spicy Shishito pepper jelly to small squares of creamy goat cheese tart before garnishing them with tea parsley.

Much of the attention, however, is focused on the cluster of whole Springer Mountain chickens hanging over an open-pit fire, dripping with natural juices and a marinade of olive oil, vinegar and Frank’s RedHot. Guest chef and James Beard nominee David Bancroft, the rock-star owner of Acre in Auburn, Alabama, dips one of the long rosemary stalks he picked from his back yard before driving here into a huge black iron kettle of sauce and swipes it over the browning birds.

That’s my chicken,” he jokes, pointing to his personal pick. “The one with the crispy skin.

Launched by the Niels after they noticed that chefs who were normally fiercely competitive were amiably working together to host food and wine festivals at venues across the Southeast, the Scenic City Supper Club has become nothing short of a foodie phenomenon, with only the guest chef, not the menu, announced beforehand. The quarterly pop-up events are designed to spotlight Chattanooga’s emerging restaurant scene and culinary artists, from bakers to farmers to mixologists, at unexpected locations like the Tennessee Stillhouse and the former Loveman’s department store. Patrons eagerly gobble up the pricey tickets; this gourmet summer picnic sold out in six minutes.

“I think it’s touched on something community-based that we weren’t really aiming for,” says the easygoing Niel as he takes a short break from overseeing the festivities. The chatter of food preparers, along with the clinking of plates and utensils, is starting to pick up. “It’s been accepted by the people of Chattanooga at large. I mean, if a restaurant was accepted this way, it’d be like off-the-chains good. So maybe it’s supply-and-demand. There are only four a year, so that means only 600 seats a year.”

Each supper must abide by two rules, Niel insists. It has to be a sit-down affair. And it cannot be held in a restaurant. “I see supper as less formal than dinner,” he adds. “Supper is more like an outside picnic to me. I’m sure there are some ladies in Birmingham keeling over dead because I said that, but that’s just what I knew it to be.”

At this point in his career, the James Beard Foundation award finalist enjoys producing the suppers and letting the newbies and rising stars bask in the spotlight. “I kinda have more fun seeing how the young guys do it and learning from them instead of just dogmatically insisting that it be my way,” he says. “I’m not a big fan of the food competitions because it’s just never been that much fun for me. I know some people standing around this table are really competitive and they like that stuff. But for me, I’m a JFKer. I think the rising tide floats all boats. So I want to give the younger chefs and cooks in Chattanooga a chance to participate in something where they don’t have to worry about being judged.” What’s more, he says, “Everybody who comes as a guest is just a happy recipient of us getting to hang out and play together.”

Niel and Bancroft, met while teaching charcuterie classes. Their wives became friends, the couples swapped stories about their kindergarteners, and the two men developed a respect for each other’s commitment to preservation, canning and the heritage of Southern food. Bancroft didn’t hesitate when Niel invited him to be guest chef for the Lula Lake Summer Social. “When he said, ‘Hey, I’m gonna have a supper club and it’s gonna be by a waterfall,’ I said, ‘I’m in,’” Bancroft recalls. “It’s summer. It’s gonna be hot. It’s a long walk from the parking area. Everybody knows it. But they don’t care ‘cause they’re excited to eat like this, be with the extended family. This is how communities came together, and towns, to eat. This is literally an extension of Erik’s home. He has created that environment here and allowed us all to be a part of it.”

Before long, the dynamic Bancroft has traded his t-shirt for a long-sleeved button-down and is wiping the sweat from his brow with a rag as he tends to the oysters. Suddenly, as if out of nowhere, and before the official cocktail hour begins, the crowd appears. Some of the ladies show up in sundresses, others in jeans. Most have opted for ankle boots, sandals or sneakers,having been warned to ditch their high heels for thiswilderness party and the near-mile gravel trek fromtheir cars.

As the chefs mill about, proffering trays of savory tomato basil doughnut holes and crostini topped with bourbon and chicken liver pate, a few brave souls venture down the winding stone steps, wine glasses in hand, to the fall’s base to snap selfies and drink in the sounds of the rushing water. One young, gorgeous couple waits under a tree as Bancroft places the last of the curried oysters atop the rack, flames licking the bottom of the grill. When the bivalves are done to his liking, he nods to the pair as if sharing a treasured secret. “I’m headed over there with them. Just hover with me,” Bancroft whispers and leads with the pan of oysters, the pair following closely on his heels. 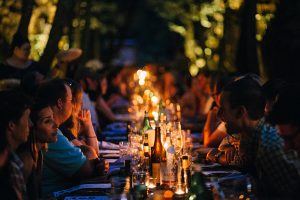 With daylight fading through the canopy of maples and hickories above the communal table, the hungry guests gather for their long-awaited meal. First come the Johnnycakes with smoked trout, then the shrimp salad, and finally the huge family-style bowls of fire-roasted chicken, falling-apart tender, sprinkled with pickled corn chow-chow, and drizzled with Alabama white sauce. ‘Oh my God, that’s beautiful,” one young woman exclaims. “It looks delicious.” For a moment, the diners fall silent, too busy to talk as they scoop butterbean salad from small bowls and pepper their loaded plates with Chattanooga-made Hoff Sauce.

Sated by a dessert of fresh double chocolate and strawberry-cream cheese doughnuts, and pleasantly tired from their woodland adventure, the satisfied guests bid their neighbors goodbye and begin the 15-minute hike as a group back to the parking lot. Leading the way is the light from a smattering of cell phones and the stars in a crystal-clear sky.