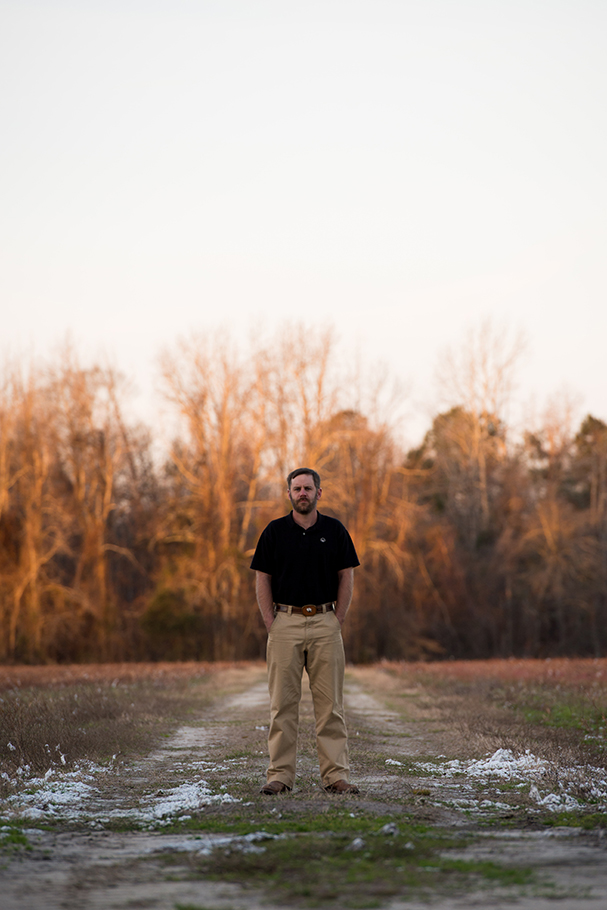 Hearing thirty-six year-old cotton farmer Atwood McIntosh speak politely in his glacial, low-country murmur, you wouldn’t necessarily guess that the man in the chinos, eye glasses and polo shirt is a revolutionary. But revolution runs in the unassuming South Carolinian’s blood.

That’s right, no trips to Asia. These shirts are down homemade.

In 2005, McIntosh earned an M.B.A. degree—the first in his family, who encouraged him to venture beyond farming if he wished—from Francis Marion University. But, for years, the eighth-generation cotton farmer didn’t know exactly what to do with it. He’d grown cotton for much of his life, just as his family has done in central South Carolina for the past two hundred and fifty years. Working on the farm since he was six, some of his earliest memories are of pulling up pigweed—a common cotton scourge, also known as Amaranthus retroflexus—from the rows and rows of cotton plants, which now fill nearly five hundred acres of McIntosh land. “We had probably a little less than that back then,” McIntosh said during a recent visit to his farm, off McIntosh road near Sumter, South Carolina, where a nineteenth-century farm house, full of old McIntosh heirlooms, is sheltered by a giant live oak, just down the road from his family cemetery. “But some of those weeds were so big you’d strain your back trying to pull them out of the ground.” 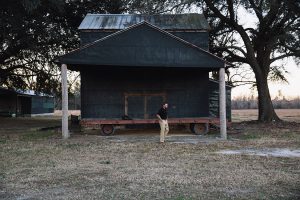 “I always liked work when I was young,” he said. “Earning a little money, that was exciting. I got paid maybe forty dollars, by the week.”

In the summers, he’d also spend hours in the trailers where the picked cotton was tossed, just walking back and forth, tamping it down. Later, he sprayed the fields with his father and brother. Cotton was a great business to be in at one time. But that time, he learned, was decades earlier: At’s grandfather, Irwin McIntosh, told him that the old man had such a good year in the early nineteen fifties that he’d built his house and paid it off using just one year’s cotton crop. He also bought the first mechanical cotton picker, around 1954. It was a one-row picker that mounted on top of a tractor, which was driven in reverse. It cost around $5,000 then. “Times,” McIntosh acknowledged, “have surely changed.” But his home has not.

Currently it’s McIntosh and his father on the farm. “He has turned over the management of the farm to me. My brother, a structural engineer, and my three nephews help on the weekends.” McIntosh fondly recalls, “My grandfather was there on the farm when I was young, before he retired and passed away in 2007. My grandfather’s father, Mr. At, bought the farm where our house is in 1919.” The farm Mr. At and his father were born on is 5 miles from the house McIntosh now lives in and in the early 2000’s they purchased that farm, “the estate”, from family. The estate was where the McIntoshes lived after the War Between the States. Before that they lived on a plantation near Midway Presbyterian Church. His great great grandfather, Fadden, started growing tobacco in 1896. Tobacco was the money crop through those times. In the 1950’s tobacco employed over fifty percent of the people in Williamsburg County, SC.  The family grew tobacco until 2006 and McIntosh still grows peanuts and corn. 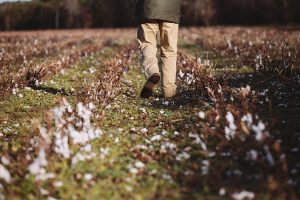 In 2012, McIntosh toured Cotton Incorporated’s headquarters, outside of Raleigh, where cotton is studied like a space age molecule. “The different ways you can market it,” McIntosh said, “dye it, waterproof it, all kinds of stuff. I toured the spinning mill up there and that kind of planted the seed to do something different with our cotton.” Still, it wasn’t until the summer of 2014 that he had his polo shirt epiphany. “We had cotton in the field,” he said, “but none on hand here. I was getting ideas and I decided I wanted to make a shirt: I thought that would be very neat if I could make a shirt and it would all be done here, as locally as possible.” It would be a good addition to farming, tied right into vertical integration.

“Taking a farm product,” he explained, “and turning it into a retail product, instead of just selling it wholesale. It’s good to have something extra for bad years on the farm.” And he could get his family—particularly his nephews, one of whom has an interest in cotton farming, to help.

He decided to begin conservatively, with a Polo-style shirt: “classy and classic,” he explained. “Start with that and see where I went.” So he talked to people and mostly heard a lot of doubt: his idea would be too hard to accomplish on a small-scale. It would be too difficult to rely on just his cotton. Too challenging to find a spinning mill that would separate his cotton from the rest of their cotton supply. “Most large scale mills didn’t want to mess with any of that,” he said. But he found one. And he found a sewing outfit, too. And an all-natural dye-master. All of whom he met with face-to-face. He could look all of them in the eye, shake all their hands, and know they’d pick up the phone if he ever called with a question or a concern. 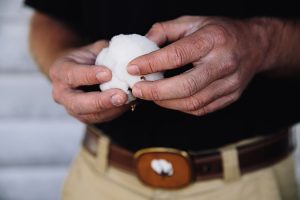 In an average year, he and his two full-time farm employees harvest about 500,000 pounds of cotton, and, at the moment, around ten percent of that goes to his “Homegrown Cotton” shirts. The rest ends up in big mills that, he says, “sell to Hanes where it turns up in underwear, undershirts, socks, all that.” He keeps the best quality—the cotton with the longest “staple,” the strongest fibers, the whitest color—for his shirts. It takes ten months to get from seed to shirt. “I hope to shift more of our cotton to being used for our shirts,” he said. “I hope to shift all the way that direction, actually. I could grow more overnight; get more land, if I had to. Wouldn’t be a problem.”

[perfectpullquote align=”full” bordertop=”false” cite=”” link=”” color=”” class=”” size=””]So far, McIntosh has sold more than 5,000 of his farm-to-closet shirts, which retail for sixty-nine dollars. Some people tell him that’s too much. Some say they don’t care where the shirts are made so long as they’re cheap. But he’s banking on that being wrong. And, slowly, people are coming around to his way of thinking: that being homemade matters.[/perfectpullquote]

While they didn’t understand the idea at first, many of his family members wear his polos now with pride. “The shirts are about all my father wears, actually,” he said. “I tell him, you don’t have to wear them in the winter and catch pneumonia just trying to support me! But he does. And he gives out my business cards to anybody who talks to him: waiters in a restaurant in nearby town, even. My mom, she helps with shipping and stuff. It’s still a family business.” 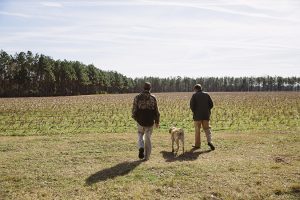 He paused, standing on the porch of the farmhouse that’s been in McIntosh hands for more than a hundred years. “I think my grandfathers would be proud. I don’t have any children, but my brother has got three boys and two of them are teenagers and the oldest has a strong interest in farming. One of them could be here farming in ten years, or whenever I retire down in Costa Rica.”