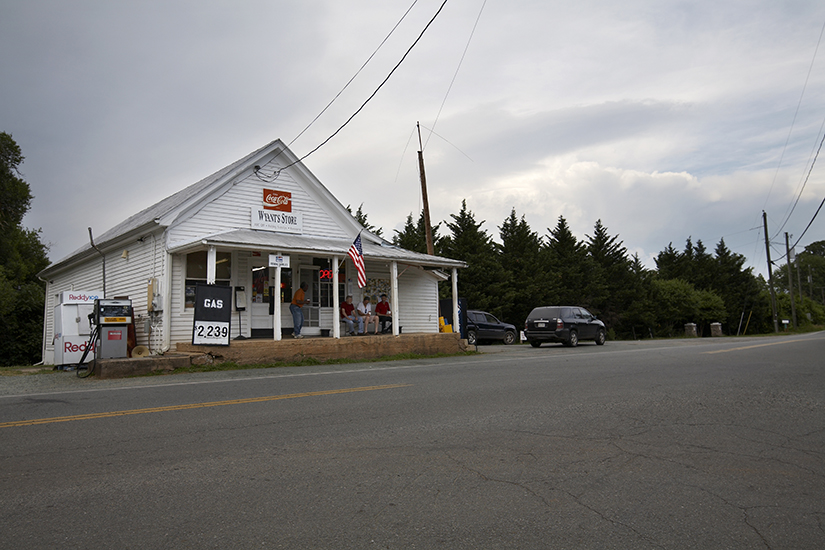 A Town That Lies

Driving the road out of Crozet, my truck seemed to pick up an energy stored in the winding pavement layered atop the rolling hills. Yet, being from out-of-town and unfamiliar with every degree that I was to turn my steering wheel to navigate the oncoming curves, I traveled cautiously. There always seemed to be some impatient local looming in my rear-view, frustrated with my pace and probably cursing the Carolinas once they noticed my plates. With them in tow, I coasted past barns, orchards, pastures and vineyards en route to my destination.

[dropcap letter=”I”] continued north on VA-Route 810 and smack-dabbed right into Wyant’s Store dotting the i’s as Garth Road crossed the T. This was my landmark indication that I had arrived in White Hall. Had I continued roughly a mile in either direction on Garth Road, I would have toured the entire town. Two churches help to set the parameters of this community – towards the west is Mt. Olivet Baptist and to the east Mt. Moriah United Methodist. In-between these are the town’s central characters – Piedmont Store, the White Hall Community Center and Wyant’s Store. 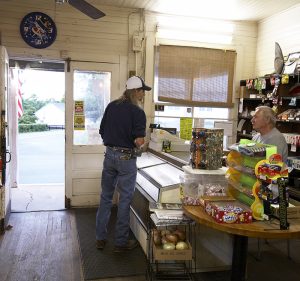 Larry Wyant’s family has owned this crossroads-post since the late 1880’s beginning with his great-grandfather, Adam Wyant. Set across the street from the White Hall Community Center, together both buildings make up the hub of the community and serve as an axis point for the people of this Western Albemarle County town. The store is constantly active with those stopping by for a few refreshments, necessities, or just to perch on the bench that sits on the front porch to chat with a neighbor and watch the traffic pass by. The bench was acquired from the historic Civilian Conservation Corps Camp that previously had been located in White Hall. Larry is surprised that it has lasted so many years without breaking, although he has “seen it bend a good bit.” Wyant usually arrives at the store early to set up the day’s offerings. Staples like: BBQ, sloppy-joes, vegetable soup, and pinto beans are lined up on the counter in crock pots next to the coffee station, which seems to be endlessly drawn upon, filling bottomless cups without a fee. It’s a place that still serves fried baloney sandwiches and Wyant makes special mention of the fresh chicken salad as something not to be missed.

The store has always been a place for the residents of White Hall to gather. Wyant recalls visiting as a child when his grandfather ran it, watching the ole timers play Setback by the charcoal stove with two single light bulbs that lit the entire store. Most of the time his grandfather would only keep one powered on, to conserve resources. As it was in the past, Wyant’s Store still remains an important figure in keeping the community of White Hall held together and should you happen to find yourself there early in the mornings, you may have the opportunity to witness, and be a part of, one of the unique features this close knit community has to offer, the daily meeting of ‘The Liars Club’.

I’ve never told a lie in my life!” Neil Clark says to me from across the table wearing a half-smile across his face.

The group chuckles a bit as Elbert Dale chimes in, “That’s the start…that’s the start now.” Meeting daily in the little side section of Wyant’s at a couple of tables pushed together with enough seating for about a dozen, The Liars Club is an unofficial, unaffiliated, non-sanctioned, and self-sustained group of some of White Hall’s most interesting citizens, all primed and ready for a fresh set of ears with a fresh set of tales. There is no official charter, no dues to enter, the only rules are general politeness, and any and all are welcome to participate. They get together daily over coffee and sandwiches to tell tales, talk about current events, or discuss what is happening around town.

Even though it is mostly unofficial, The Liars Club does seem to have a master of ceremonies and general spokesperson in 85 year-old retired Air Force veteran, Elbert ‘Dale’ Dale. Having spent most of his life in the area, other than his 20 years of military service, Dale presides over the club as well as being regarded as a central figure within the community. As local farmer, Larry Abel, enters Wyant’s declaring to Dale, “Im’a bring your hydraulic pump back”, Liars Club member Bob Tullmann leans to me and says of White Hall, “Tractors are the common denominator” and continues to explain that Dale is the town’s engineer and being so mechanically inclined that without him, the town would probably fall apart. Dale, in his deep voice, simply confirms, “I solve a lot of their problems.”

When asked about the group’s usual topics of discussion, Dale answers, “Everybody comes up with whatever they want to, come up with a subject, start talking on it, and we give our opinion.” But, due to the interested (and slow-driving) out-of-towner, they shared some of White Hall’s history; beginning with the time the Nazis invaded. Well…invaded may be a stretch. During World War II the Civilian Conservation Corps (CCC) Camp in White Hall was converted into a holding camp for German prisoners.

Dale explains, “and the farmers would check ’em out and work ’em on the farms. I worked with some of them. I got my permit when I was 14 and I’d drive ’em up here and bring ’em home. Mr. Woodson hired a couple of them, cost $5 a day. They give ’em a jar ’a apple butter and a loaf of bread. They thought this was luxury compared to combat and a lot of them wanted to stay. Some of them fell in love with daughters of families they were working for.” Neil Clark adds, “The original camp only had a fence around three sides, the west side never had a fence built on it.” Dale continues, “When I was going to school, at the White Hall School, one of the dads was a guard up there and he told about one that was an SS member, he refused to work and one day climbed up in a tree and wouldn’t get down so they got the head guard and he said “well, we’ll get him out…”, went down there and shot him out.”

The extent of truth you apply to this version of the Liars Club rendition is totally up to you but other sources indicate that indeed, there was an official German prisoner camp located in White Hall. While hearing the tales being told that day, it becomes clear, the importance of the tradition of handing these stories down through the generations of townsfolk. It is one of the ways this town stays connected to the past and “currently”, to each other. There were multiple tales and stories from all members that flew around the table in Wyant’s Store that day: There was the one about the baboon that fell in love with Dale on a movie set, insisting he hold hands with her during lunch breaks. The one about coffins on the porch of the store, dripping blood into the streets and one about the club being called ‘The Buzzard Roost’ instead of Liars Club. Another story tells of compiling a book of ‘One-Liners’, being called ‘Mouth’, and winning hearts with Johnny Cash songs. Stories of stone sculpting, working for the Atomic Energy Commission, hiking the Alps, cowboys teaching cattle ranching to the Russians, raising hawks, and a school-house pissing contest that was won by a girl, much to the chagrin of all the young lads involved. Heck, I even walked away from the experience being able to tell my own tale: one of meeting a man who led me to his shop tucked into the hills of Albemarle County. He gifted me a hand turned piece of poplar felled from land at Jefferson’s Monticello, after which he showed me the finer points of homemade cannon production, using a welding rig and some paper towels…but that’s a tale I’ll save for further down the road.