Growing up in Fort Valley, Georgia, Stephen Rose never had a bad peach. Eating succulent peaches right off the tree in the heart of Georgia’s peach country was de rigueur for him in summer. “When you bite into a perfectly ripe peach, it should surprise you with its sweetness,” Stephen claims. “You should have to lean over to avoid the juice running down the front of your shirt.”

So imagine his dismay when he moved to Nashville in 2010 with his then-girlfriend, Jessica (they married two years later), and could not find a decent peach in summertime. “When we first moved to Nashville, it upset me so much to think I had found a great peach and then to have a bad experience,” Stephen recalls. The bland, mealy impostors he found in Nashville didn’t hold a candle to the peaches he delighted in as a child. He couldn’t understand why this was the case, as his new city was just a six-hour drive from the best peaches he’d ever tasted. 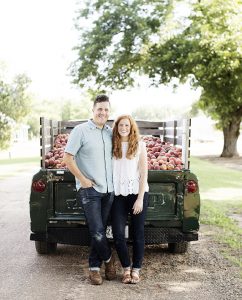 While visiting Stephen’s hometown in 2012, the couple hatched an idea: What if they brought Georgia’s glorious peaches back to Nashville? They partnered with the fifth-generation growers and longtime family friends at Pearson Farm to bring fresh peaches to their adopted city. Loading the fruit into the back of Stephen’s 1964 Jeep Gladiator, they set out to share their bounty with restaurants and farmer’s markets in Music City.

Eight successful seasons later, The Peach Truck still makes its rounds in Nashville—where the Rose’s peaches have developed a cult following. They now sell to some 50 local restaurants, and The Peach Truck travels to eight states each summer.

This July, the couple added a new dimension to their business, in the form of The Peach Truck Cookbook. “Doing the cookbook felt like such a neat opportunity to share our story and what we value,” says Jessica. “Our core team value in our company is sharing the joy of a peach. We wanted to encapsulate that joy and the celebration of summer within the pages of the book.”

And since The Peach Truck only sells fruit by the 25lb box and peaches have a shelf life of about three days after they’re picked, the couple’s first cookbook provides customers with 100 different ways to use the “queen of fruit” at its peak of ripeness. 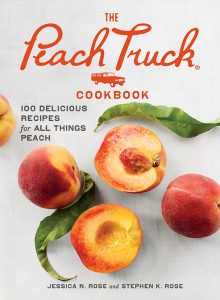 The book, which sprouted from recipes that Jessica would occasionally post on their website, illustrates courses from cocktails to desserts and includes submissions from some of the couple’s favorite Nashville chefs. Recipes, which Jessica perfected with the help of recipe developer and food stylist Torie Cox, are intended to be accessible and feature ingredients available in your kitchen. “We wanted recipes that you could feel great serving to your kids and your family,” Jessica declares. “We wanted it to be a book that was a staple on your shelf, not just in summer, but all year-long.”

Case in point, in winter The Ultimate Sticky Buns make a perfect breakfast treat. “The sticky buns have become a Christmas tradition for us,” notes Stephen. “We make them on Christmas morning with peaches Jessica put up in summer.”

While some submissions are from chefs and farmers—the Bourbon Bread Pudding comes courtesy of Pearson Farm—others, such as The Rose Kids Baked Oatmeal, were created by Jessica. “We have three young kids, and in those early years of young babies I had to make large batches of things because there was no time,” she explains. “So I made a 9×13 pan of this baked oatmeal, and it was so good and so hearty that it sustained my young mom life. My kids still love it.”

In the back of the book, the Pantry section details ways to preserve summer peaches, such as peach vinegar, peach hot sauce, and The Peach Truck Signature Peach Jam. Sprinkled throughout the book are informational sidebars including how to prune a peach tree, how to care for your peaches, and the couple’s suggestions of places to eat if you’re ever in Fort Valley, Georgia, the location of Pearson Farm.

Stephen and Jessica see The Peach Truck Cookbook as a way to deepen their relationship with their customers and to reach a new audience. “I’d love for readers to feel connected to Stephen and I,” shares Jessica. “I’d love for them to take away the diversity of a peach, and find their own story of what summer can be for them in their home with their friends and families.”

Excerpted from The Peach Truck Cookbook by Jessica N. Rose and Stephen K. Rose. Copyright © 2019 by S&J Rose, LLC. Reprinted by permission of Scribner, an imprint of Simon & Schuster, Inc.