The future of Delta blues may rest in the hands of one man. Christone ‘Kingfish’ Ingram swims into deeper waters on his debut album.

When people talk about Clarksdale, MS, it’s often in reference to the fabled crossroads, where blues legend Robert Johnson exchanged his soul for the devilish guitar licks that made him famous. Or maybe Ike Turner, who left Clarksdale for Memphis to cut “Rocket 88,” which some historians point to as the first recorded rock ‘n’ roll song. Or Muddy Waters, who left nearby Stovall Farm and boarded a train to Chicago, eventually inspiring young Brits like The Rolling Stones, who bore his influence so much they cribbed a Waters song title for their band name.

To get to the meat of it—if you want to pick up a guitar here, there’s a lot to live up to. Christone “Kingfish” Ingram, Clarksdale’s latest blues wunderkind, makes a strong case. Only 20 years old, Ingram has already performed on stages around the world and at The White House, despite picking up the guitar just eight years ago. His debut album, Kingfish [Alligator], both establishes him as the new voice of Delta blues and showcases his own vision for the future of the form.

Down in Coahoma County, where Highway 61 runs flat and straight, stuck to alluvial soil under the Delta sun between fields of former gold, you’re never more than a few connections from anyone.

Ingram’s own family tree name-checks country pioneer Charley Pride, a distant relative. His mentor, Tony Coleman, backed B.B. King on drums. The biggest influences in his musical lineage, though, may have come from the neighbors who moved in next door when he was in elementary school.

One day I was outside and I heard some playing, and they saw me with my guitar in the yard and invited me to come over,” Ingram says.

“They” happened to be blues heavyweights Wesley “June Bug” Jefferson and Terry “Big T” Williams, two well-known musicians who were collaborating around the time of their album Meet Me in the Cotton Field. “I would go over there and listen to them while they rehearsed, and every now and then they would let me come to the parties they were having.” 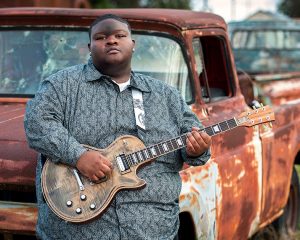 Ingram immersed himself in the music while also picking up tips on how to lead a band. At home, his parents filled the house with Lattimore and Johnnie Taylor—the Malaco Records soul and R&B out of Jackson, MS—and he watched, and later joined, his uncles who played music at church on Sundays.

After his father enrolled him in blues classes at the Delta Blues Museum, Ingram switched from bass to guitar and began devouring the music lessons from 3 to 5 o’clock after school. When he got home, he went straight to YouTube to hunt down videos that unlocked the blues for him even more. By the time he was a teenager, Ingram was gigging as Kingfish and hailed as a guitar prodigy. But something was missing, and it took bluesman Buddy Guy to help him figure it out.

Ingram first opened for Guy in 2012, then sat in with him on stage three years later. Back then, he was playing a lot of standard Delta blues songs live, but knew he wanted to develop his own style and songs to carry the tradition forward.

That opportunity came in a big way in 2018. Guy reached out through Coleman to let Ingram know he wanted to link him with his producer, Tom Hambridge, to record his own songs. He even offered to cover the studio bill. They met, talked through it, and within a few months Ingram was in a Nashville recording studio cutting what became Kingfish.

“I really appreciated [Guy] because I really needed the help, and I’ll forever be grateful to him for that,” Ingram says. “I didn’t have all the financial backing that everybody else had.”

Guy even dropped in to share guitar and vocals on “Fresh Out,” the album’s first single. Ingram shines throughout while blending his influences, exploding from traditional blues song forms into fiery solos full of the fury and determination of an artist acknowledging, then obliterating, his boundaries.

No artist deserves the baggage that comes with being hyped as the next big thing or the last great hope. The trick—and Ingram has done his homework on this one, too—is transcending the box you create for yourself, or you’re put in, and staying one step ahead of those expectations. Still, there’s no denying his importance to keeping Delta blues a living, evolving music.

“In recent years, we’ve lost a number of blues legends from the old school,” says Roger Stolle, blues aficionado and owner of Cat Head Folk Art & Delta Blues in Clarksdale. “We’ve lost juke joint favorites like T-Model Ford, Bilbo Walker and Big Jack Johnson, as well as the last universally known bluesman, B.B. King. So, I think it is totally fair to question the vitality, relevance and future of the blues.”

Ingram doesn’t wither at the thought of carrying the Delta blues legacy. He wants to keep it going, and sees bringing in contemporary hip-hop influences and welcoming those cross-genre collaborations as key. Now that he’s worked with Guy, he wants to collaborate with artists like Snoop Dogg, DJ Quik and H.E.R., and find those common points that can bridge the gulf between genres for young music fans.

“Honestly, with a lot [of] urban black kids—well, black people in general—they don’t care really too much for the Delta style of blues because they say that it reminds them of hard times,” Ingram says. “That is true, but they just don’t look at it from a cultural thing, you know? And most young kids in general, they don’t look at it like that.”

It’s that cultural component Stolle sees as so vital to the blues. Really feeling the blues, like how Ingram wrenches those wailing notes from his guitar, is more important than technique.

“Because I live in Clarksdale, I get to see an amazing number of talented — often quite young — blues players come through town,” he says. “Many are technically amazing but very few came up in the culture of the blues. Most have learned the notes and chords from a book, essentially. There’s nothing wrong with that, but I’m not sure that’s a continuation of a musical or cultural history. Kingfish, on the other hand, is really and truly the next step in the evolution of blues music.”

A self-described “old soul,” Ingram acknowledges that history. But he knows someone has to keep it moving, or it will become a museum piece, despite its transformative role in American culture.

“People my age and younger, they need to know about this,” he says. “Specifically young black kids, because this is our history.”