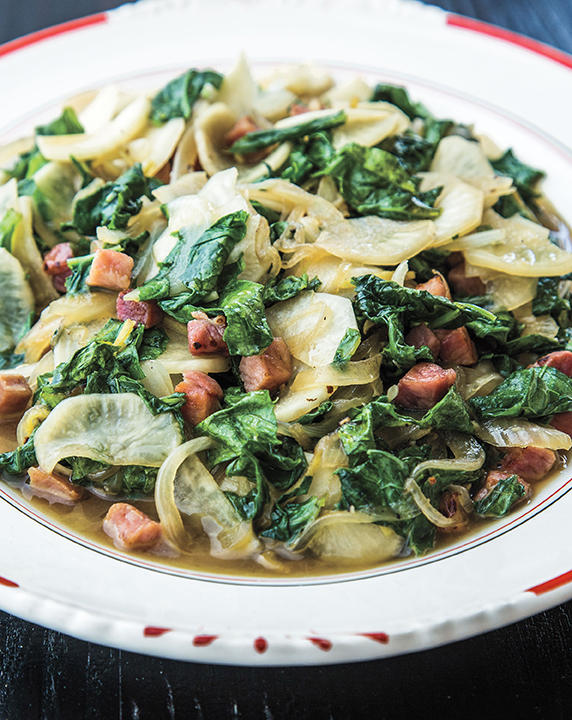 Southern Stir-Fry with Turnips and Greens

Southern Stir-Fry with Turnips and Greens is excerpted from SECRETS OF THE SOUTHERN TABLE © 2018 by Virginia Willis. Photographs © 2018 by Angie Mosier. Reproduced by permission of Houghton Mifflin Harcourt. All rights reserved.

The Mississippi River Delta, stretching for about one hundred miles along the banks of the mighty Mississippi and extending eastward fifty miles across the state, is one of the richest agricultural regions in the world. After the Emancipation Proclamation was enacted and slaves no longer worked the cotton fields, Chinese men migrated to the Delta in search of work. As is often the case today, many intended not to settle permanently, but to earn money to send home, but when they arrived, they found hard labor and low pay. To achieve economic independence, these new immigrants opened grocery stores, selling to the black freedmen who had formerly used the plantation stores. The first Chinese grocery store in Mississippi likely appeared as early as the 1870s. Chinese immigrants continued to come to Mississippi over the generations, joining their extended families and incorporating their cooking into the local cuisine, as seen with this recipe for stir-fried turnips and greens.

Southern Stir-Fry with Turnips and Greens

Stir together the stock and sherry. Set aside. Heat a 14-inch flat-bottomed wok or large skillet over very high heat until a drop of water evaporates within a second or two when added to the pan. Add the oil and heat until shimmering. Add the ham and cook until sizzling. Add the garlic and ginger and cook just for 10 seconds. Add the onion and cook, stirring continuously, for 1 minute. Add the turnips and stir-fry for another minute or two, then season with salt and pepper. Add the stock mixture to the pan and toss together quickly with the vegetables. Add the greens and cook, stirring, until the vegetables are crisp-tender—3 to 5 minutes. Taste and adjust for seasoning with salt and pepper. Drizzle with honey, if you choose, and serve immediately