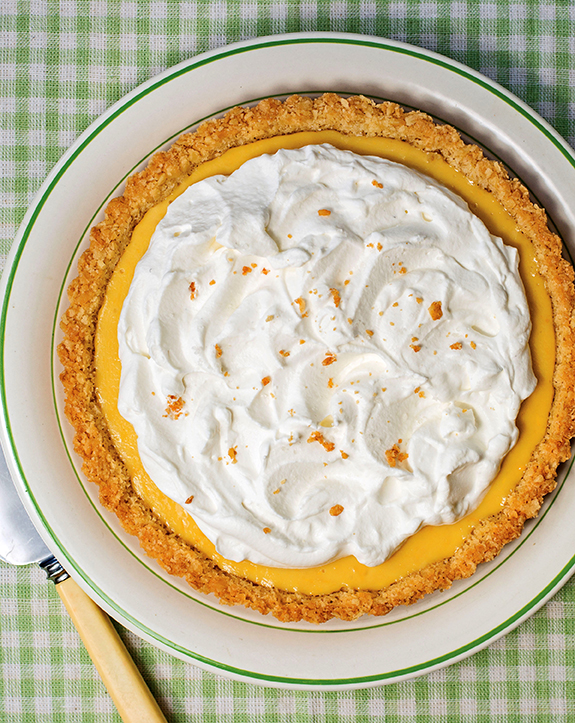 LEMON ICEBOX TART WITH SALTINE CRACKER CRUST is excerpted from SECRETS OF THE SOUTHERN TABLE © 2018 by Virginia Willis. Photographs © 2018 by Angie Mosier. Reproduced by permission of Houghton Mifflin Harcourt. All rights reserved.

I first tasted this pie at Crook’s Corner, the legendary Chapel Hill restaurant that’s had my friend and colleague chef Bill Smith at the helm for more than two decades. The first forkful was a revelation, the sort of otherworldly gustatory experience that involuntarily causes heads to tilt back and eyes to roll—the OMG kind of reaction. It’s a perfectly crafted balance of sour, salty, bitter, and sweet. The best thing about it isn’t the bright lemon flavor, but its salty, savory cracker-crumb crust, which distinguishes it from sweet piecrusts made with crushed cookies or graham crackers. Best of all? It’s dead simple to make. Bill doesn’t take credit for inventing the pie, but he has single-handedly revived a vintage recipe.

Bill is that kind of man, that kind of chef. He’s very modest, yet in 2011 the James Beard Foundation named Crook’s Corner an “America’s Classic,” and Bill has been listed twice in the final five for the award for Best Chef Southeast by the same foundation. He’s unassuming, riding his bike with the beat-up metal basket around Chapel Hill, but the truth is that Bill Smith is one of the most influential chefs in the Southeast. Chef Bill Neal, truly a groundbreaking chef in regard to Southern cuisine, was the chef-owner for the first ten years of Crook’s Corner. With his passing, Bill Smith took the toque—or well-worn baseball cap—and has been there ever since. I didn’t know Bill Neal, and while I understand his legacy, I have the opinion that if Bill Smith weren’t so good at what he does at Crook’s Corner, that legacy might not still shine so bright. Bill Smith has not only proudly carried on Bill Neal’s legacy, but also created one of his very own.