It all started with an unwanted boulder.  New road construction near the small community of Hollywood, AL. left a boulder deposited on the property of farmer Leonard Dawson. But as he looked at the boulder and pondered what to do with it, he saw a rooster take shape, instead.

Deciding to move it in front of his grain silos, he thought he would ask around to see if he could find someone to paint it and bring his idea to life. But as luck would have it, no one else shared his vision.  Not one to be deterred, Leonard decided to tackle the project himself.  So using some paint and cement he had laying around the farm, he crafted a rooster’s comb on the top of the boulder and his rooster was hatched.  The rest is history and a fun roadside attraction.

Since that day in the late 1970s, Leonard has used his imagination to create more than two dozen limestone animals on his property.  Relying on the natural contours of the limestone rocks, each has been colorfully painted to abstractly represent many different animals. 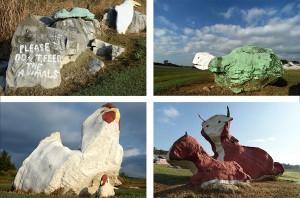 Situated between his family’s two houses, this misshapen herd includes the original rooster, a chicken and chick, a bull and calf, turtle, raccoon, elephant, bullfrog, giraffe, squirrel, goat and more. An alligator guards a sign warning people, “Please do not feed the animals”.

These days the Zoo is tended by Leonard’s son, Larry, who took over after his father’s death a few years back. With the help of his daughter and son-in-law, they make sure the animals live on a freshly mown lawn and get a fresh coat of paint and repairs if they should need them.  Keeping Leonard’s dream alive is very important to them.  They’ve even added a couple of their own creations like the Alabama Crimson Tide elephant.

Take the winding back road where a limestone sign marks your arrival to the Rock Zoo. It’s visible from the road, but don’t miss out on the opportunity to walk among the animals, climb around and take photos, however please be respectful of the sculptures. Don’t climb on anything that looks fragile.  There is no charge to stop and wander around the zoo, and if you’re lucky, Larry or one of his family members will join you and regale you with tales from the zoo.

Let your imagination go wild when you visit, like looking for shapes or animals in the clouds.  This is one rock show you don’t want to miss.