Menu
Down to the basics

There’s nothing trendy or fancy about the doughnuts being made every morning at Spalding’s Bakery on Winchester Road in Lexington, Kentucky, nothing automated or “robot driven.” Rather, these round rings of yeasty, sugary bliss are simplicity at its best, handmade creations whose irregularity in shape and color are part of their charm and one of the very things that owner Martha Edwards loves most.

Having grown up with flour and sugar practically flowing through her veins, Martha is a third-generation baker at the bakery her family has owned since 1929, when her grandfather Bowman decided to leave his job working as a bread baker for a Lexington wholesale grocer to open a shop of his own where he could bake and sell his goods to local restaurants and customers in search of something sweet. And while bread was once his biggest earner, when the industrialization of bread making took its toll on the load of loaves leaving his shop, he rolled up his sleeves to concentrate more on the doughnuts that were quickly making his humble little bakery famous.

As the years went on, the bakery did more than just put food on the table for Bowman and his wife, Zelma. The building itself also served as the Spalding family home, with a small apartment above the bakery and storefront where Bowman’s children—and later even his grandchildren—grew up smelling the scent of sugar perfuming the air and a putting their fingers to task helping with the daily duties that kept their family’s business running strong.

It was perhaps her own years spent living above the bakery in the location it once claimed on 6th and North Limestone that made Martha fall so deeply in love with doughnuts, years that gave even greater rise to the relationship she had with her grandfather—who, in the absence of her father, became a father figure she greatly craved as a little girl. And after her father’s death left his wife and two young daughters needing some family support, Spalding’s Bakery became a comfort and a haven for the little girl who would later take the reins of the business and keep that legacy alive.

The story itself is what truly makes one smile, the thing that makes Spalding’s such a sweet destination. And when the darkness of the predawn hour is broken by the kitchen’s lights as the traditions of her family begin for the day, Martha is no doubt reminded of the many mornings she spent tiptoeing up and down the back steps from the apartment to the bakery to watch as her grandfather made his doughnuts, her tiny fingers sinking into the soft, pillowy dough of freshly glazed doughnuts still warm and gooey from the glazer. 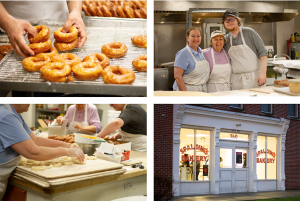 “We lived with my grandparents for a couple of years when I was about four or five, and I would sneak downstairs every morning—still in my nightgown—to sit with my grandfather while he was working, and he would give me doughnuts straight off the glazer,” Martha recalls.

“Then I would sneak right back up to bed and wait until my mother came to wake my sister and me to get us ready for breakfast—but I never wanted breakfast!” she laughs. “The whole time we lived above the bakery with my grandparents, I was never hungry for breakfast when it was time; and then when we moved away, I suddenly started eating breakfast in the mornings.”

Even when Martha’s mother moved out of the bakery apartment to raise the girls on her own, the connection was never broken, and her little hands found happy use helping out crimping the edges of pie doughs and assembling cake boxes when time after school and on weekends would allow. “I always loved doing those things as a little girl—for me, it wasn’t really a chore, it was fun,” Martha says now.

Spending those moments in the bakery, completing her little tasks and happily tagging along to help on some of her grandfather’s deliveries—“I held the door open for him, and when someone has their hands full of bakery boxes, that’s a very important thing to be doing,”—are all part of the recipe that makes Spalding’s what it is. And, of course, part of the recipe that makes Martha who she is.

Her love of baking, of getting flour on her hands and seeing the baked goods made at Spalding’s take shape and then leave in the hands of the customers who come through her doors, are what Martha finds most satisfying. And being part of that process is what truly held her passion—so much so that, even after she graduated with a degree in music education from the University of Kentucky in 1978, she abandoned her plan to become a music director to take a job working full-time for her grandfather until he finally retired in 2004. “I really think that was the best thing I could have ever done,” she says now. “I just can’t imagine loving anything as much as I love doing this.”

As Martha got even deeper in the dough, she was working side-by-side with not only her grandfather, but also her uncle “Bud” and her mother, Joyce, who had worked as a teacher for 37 years before coming full-circle again to the place where it all began. “My grandparents started the bakery when my mother was only about a year old, so all of the children really grew up in the business.”

Now 89, Joyce still flicks on the lights at four a.m. as the ovens warm up and the scent of sugar and flour dances in the air. She’s a constant that people expect to see when they come into Spalding’s as much a part of the draw as the doughnuts themselves. “This is what she wants to be doing, greeting customers when they walk through the door and serving them—and they love seeing her here.”

Joyce’s presence is a reminder, perhaps, of the earliest days of Spalding’s, which moved to another location in 2006. It was a momentous move, to be sure, as the bakery had been in the same building on North Limestone for more than 70 years, but business has been successful enough that they needed room to expand. With that expansion naturally came an expansion of their offerings as well as their staff—and now Martha’s sister and cousin help out on occasion, while her husband of 29 years, Jonathan, maintains the business management end of things and her eldest son, William, is honing his own skills as a pastry chef. “We’ve always been a full-service bakery, with cakes and pastries and breads, but what people know and love us most for are our doughnuts,” Martha says. “People seem to find them comforting, and they leave here with a smile on their face. I think it’s impossible not to leave a bakery feeling happy and comforted.”

Adding to that feeling of comfort is the line that can be traced to the many memories that make Spalding’s a local institution. “We have generations of families who come here, day after day, year after year, even when they move away. People have grown up eating our pastries and our doughnuts, and they love coming and seeing that things are the same—we make our doughnuts the same as we always have, making them by hand before we put them in the fryer, then flipping them with sticks when it’s time. They don’t look perfect—sometimes they’re darker than others, sometimes the shape isn’t quite perfect. But perfection isn’t something that our customers expect.”

Nor are oddball flavors. “We stick to the classics and stay away from the crazy ones,” Martha laughs. And having long ago perfected the taste of their ridiculously addictive rings, it could be argued that they have reason enough not to bend to the trend. Instead, they remain true to tradition—and as the fourth generation of bakers at Spalding’s fortifies the mix, Martha and her family have reason to hope that their’s is a legacy that will continue its rise for many years to come.