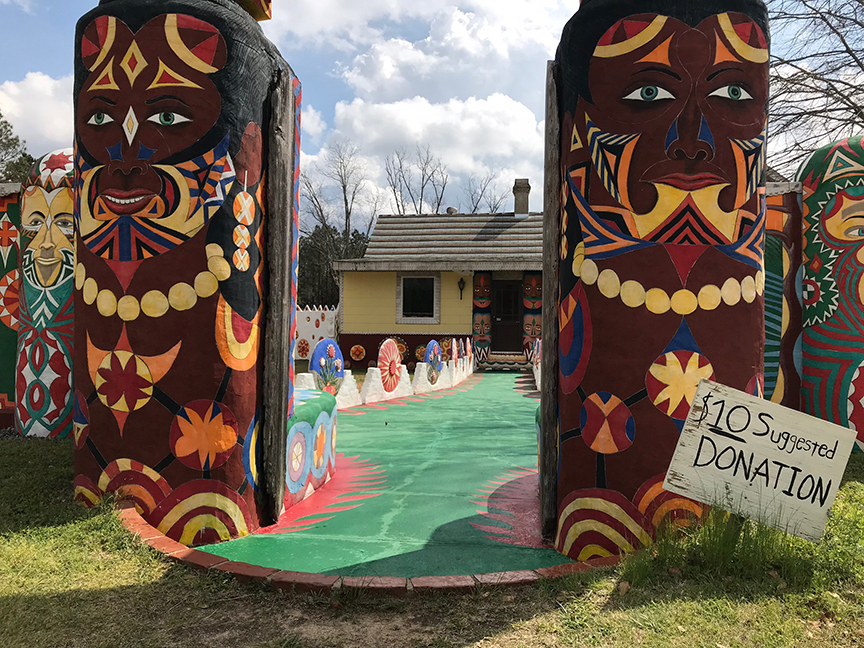 Out of This World

Born in 1908, outside of Buena Vista, Georgia, a small community near Columbus, Eddie Owens Martin ran away to New York City in his early teens, where he worked odd jobs, delved into the drag queen scene, was a merchant seaman and even studied dance. While it’s quite the combination of experiences, nothing compares to his adventure with the Pasaquoyans. But throughout the years, he always made time to come home to help his family harvest the cotton crop. Upon his mother’s death he returned permanently to Buena Vista for good –because, he claimed, “people from the future told me to.”

While he was living in New York City, Owens became very ill with a high fever. During his illness he says he was visited by three very tall “humanoids” from the future and the unknown world of Pasaquan. They commissioned him as their envoy and renamed him St. EOM (his initials). His assignment was to return to his hometown, in Georgia, create meaningful art and live his life so people would see how incredible the future would be. Who are we to disbelieve? The legacy he left is unmistakable.

Around 1955, St. EOM began bringing his vision to life, funding it primarily with fortune telling. For the next 30 years Owens built a succession of rooms onto his family’s 19th-century farmhouse, covering it with paintings of brightly clothed Pasaquoyans in their “power suits.” Using everyday house paint he covered the six buildings inside the compound with multi-colored artwork. The buildings are scattered across seven acres of land and each is completely covered, inside and out, in spiritual symbols, designs, figures, and other works of art from…beyond.

Sadly, Owens took his own life in 1986 before his life’s work was completed. The compound was in danger of falling into further decay, but as luck, or the Pasaquoyans, would have it, the site was acquired by the Pasaquan Preservation Society. Volunteers began restoration and upkeep and in 2008, the group was successful in having the site listed on the National Register of Historic Places. It’s definitely out of this world.