“Nobody told me that we were going to have a guest in church on April 2, 1967. I found out later that the preacher knew, but was sworn to secrecy. Hugo Black (former AL Senator and Supreme Court Justice) wanted this to be a Sunday morning like all others: Brother Curlee would preach, the choir would sing, and I would lead the choir. I was hired as interim Choir Director because I could read music and sing parts. I served until they could find a replacement.

Everyone liked Bob Curlee and not just people from his own church. One day we were walking around the square, shaking hands and speaking to everyone we saw, like preachers used to do. We walked in the gas station and Bob said, “Shotgun, I’ll flip you for a coke.” The store was full of men. They just looked. That really wasn’t a thing that preachers said.

We called most Baptist Ministers, back then, “Hacking Baptists.” They spoke loud and fast and then took a loud breath that sounded like hacking. Bob Curley broke the mold. He made bets, teased people, and preached the good news instead of the bad.

I had a favorite comedian at the time called Spike Jones. They called him “the man who murdered music”. He was a comedian, but he was a fine musician, too. He played with a band called “Spike Jones and his City Slickers.” His clothes were his trademark. He wore checked suits and wide ties with wild colors. We all dressed like him back in those days.

I’ll never forget that Sunday morning. The service had just started when a nice dressed man and his wife came right down to the front of the church and sat on the front row. Hugo Black and his wife, Elizabeth, came in with several of the Toland family. The congregation was in shock. Bob Curlee asked Black and his wife to stand, and he introduced them.

I can’t tell you a thing about the rest of that service, but I can tell you exactly what my clothes looked like, thanks to Spike Jones. I had on a plaid green sport coat, a yellow shirt, green pants, a paisley tie, and penny loafers. Hugo Black had on a black suit, tie, and shoes, and a white shirt. He was strictly professional.

After the service, Bob Curlee called me into his office and said, “Shotgun. I want you to go up to the Clothing Mart and buy yourself a white shirt, and black suit, tie, and shoes. You can bill them to the church!” 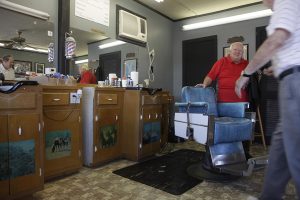 He did everything right. He was a backdoor politician and an expert at learning folks names, their families, their jobs, and connections: all the main things about every man’s family. Shotgun sang glorious tenor for a gospel group called the Ideals. His light, lyrical voice made the high notes soar through the rafters of practically every church in Clay County, AL. Shotgun’s trademark song was “Beulah Land” that he sang for funerals. He shook many a hand, and slapped many a back everywhere he went. If someone turned a back, Shotgun worried, “Is he mad at me?” He cared. It would be astonishing to know how many problems ran through Shotgun for a resolution over the years. Though Shotgun wasn’t a fixer, he knew who to call.

Shotgun’s name was a nickname, given to him by two older boys when he was around five years old. His daddy raised hogs and one day the boys happened by the Giddens’ farm after a hog killing. When they saw little Shotgun standing there, they started to tease him.

One of them said, “Did you kill them hogs?”

“I shot ‘em with a shotgun,” said Shotgun.

The boys started to laugh knowing you didn’t kill a hog that way because the shot would scatter into the meat.

“Hey Shotgun!” one of the boys teased. “I’m gonna start calling you Shotgun.”

What was meant to aggravate didn’t bother him at all. He liked the name, and it stuck.

Shotgun was, and still is, a barber by trade, not even stopping during his political career. To stop would be to let people down, a thing Shotgun didn’t do very often. Men are funny about their hair. They don’t want to change once they get a certain “look,” so his barbering insured Shotgun’s name a permanent seat around many a kitchen table.

Back in 1976, it seemed unlikely that a young barber from the country would defeat a two-term Circuit Clerk from the county seat. Shotgun’s victory was a shock. An upstart took on a fellow Baptist, and won. He hired an able staff of hard-working women, while he became the front that people met as they entered the courthouse to do business. Shotgun won two more terms, becoming one of the biggest vote-getters in Clay County history. That short list included Clay County native and Hugo Black when he ran for Senator.

Shotgun was a Democrat like most politicians in Alabama at the time. One of his yearly activities involved frying catfish at the annual Democratic Fish Fry. The 60s and 70s saw the African American community of Clay County transitioning into public school, public offices, boards, committees, but the annual fish fry was a time of camaraderie. Shotgun and these brave men and women served hushpuppies and coleslaw to at least 700 people from all over the county at the event, every year. 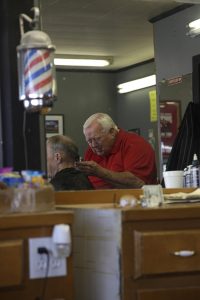 Shotgun retired in 1995. Though it wasn’t yet apparent even to Shotgun the accomplishments of his tenure. He was responsible for carrying out Warren Court initiatives to an uneasy public. Shotgun worked to make the transition easy. His interest was people, and he was the same every time you met him – accessible and anxious to please.

Hugo Black couldn’t have imagined what lay ahead for the choir director in the funny suit of clothes; that Shotgun would be a remarkable leader in Hugo’s home county, with such enlightenment and compassion.

Oh, and by the way, Shotgun’s black suit disappeared with Bob Curlee. He was back to a muted-down Spike Jones attire by the end of his church job. His clothes became a part of the legend.