While most people don’t land on a successful business idea after watching a romantic movie, there are a lot of things about Carl and Mary Matice that don’t exactly follow convention. And while the lead character in Chocolat might have seemed quite charming—dare we say enchanting—as she lovingly ground cocoa beans by hand to create seductively smooth chocolate confections that spellbound a small town with her creations, that cinematic spell also worked its magic on Carl and Mary as they watched. The thought of a unique hobby they could share as a couple piqued their interest, and they Googled their way to finding raw cacao beans and a Mexican molcajete so they could try their skills at grinding and creating fine chocolates from scratch for themselves.

After spending 20 long hours passing the mortar and pestle back and forth as they transformed the beans into powder, Carl and Mary had the key ingredient for their very first bar of inky indulgence. Tasting its refined, robust flavor, they realized that chocolate, in its essence, is an art form, an edible treasure to be savored and appreciated for its complexity. Having once melted under the charm of milk chocolate, their delve into darkness made them true converts. With each batch they produced—first, for their own satisfaction then for friends and family—the demand for their dark delights turned a mere hobby into a full-blown business. 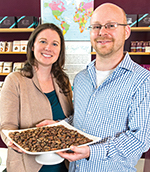 It took only a couple of years for them to make the leap from a “romantic” hobby to a side business at a local farmer’s market, to a facility where they could produce larger batches of chocolate to supply their growing demand. They made and sold bars and truffles, sourcing their organic cacao beans from fair trade growers in Central and South America. They conducted mountains of research to find only the finest ingredients to use, making their new business Altus Chocolates the embodiment of all that its name implies: a higher standard of excellence, a deep regard for quality, a profound passion for purity.

Hard to imagine all that could be expressed in a bar of chocolate? Perhaps, but once you’ve heard the distinctive snap, savored the full-bodied flavors, breathed in the smell of truly fine, hand-crafted chocolate, all of those lofty precepts translate onto the tongue. Much like wine and artisan craft beers, pure chocolates possess flavor notes that seem to tell a story, each batch of beans conveying a message of terroir— the growing conditions of their regions and everything they weathered while they were nurtured to maturity before harvest. Carl and Mary pay respect to that in everything they offer, creating products that build on their wonderful beans and using fruits, nuts, and spices from only the finest organic sources.

Officially launching in 2012, two years after Carl and Mary ground out their first batch of beans, Altus Chocolates began production a variety of artisan bars and truffles that they sold directly to their customers before branching out a year later to open a Chocolat-inspired Chocolate Lounge in downtown Lynchburg, Virginia. It was a gutsy move, really, as the couple had only been in the area for a year after moving there to be at a halfway point between their respective home states of New York and Georgia. 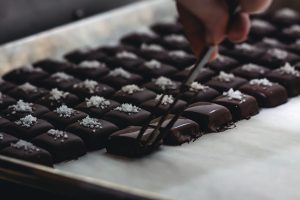 But luck won out in their favor; and, much like the movie heroine whose bites of bliss charmed a provincial town in France, Carl and Mary’s little chocolate cafe charmed the local community with their wonderful menu of bean-to-bar chocolates, truffles, gelatos, pastries, drinking chocolates, teas, and coffees.

Everything, save for the “top-notch, organic and all-natural” gelatos they source from Palazzolo’s Artisan Gelata & Sorbetto in Michigan, are made in-house, adhering to the culture they’ve created for their brand. “Every time someone comes into the Lounge, they’re getting the highest quality, and that’s what our name really personifies,” says Carl, his passion evident in every word he speaks. It’s not merely talking the talk for Carl and Mary—nor is it mere verbiage for the three full-time employees who help them manufacture their chocolates in their production facility. The friendly faces greeting the guests who come into the Lounge are just as avid in their pursuit of perfection, serving handcrafted coffees made from locally roasted single-origin beans and brewing teas made of ethically grown leaves.

Each cup of their European style sipping chocolate is created with care, meant to be lingered over. It’s a particular favorite of Carl’s and one that easily tops their customers’ love lists. So, too, do their White Chocolate Raspberry Tarts and Bourbon Salted Caramel Tart. “Many of the fruits that we use come from local growers, depending on seasonality; and a majority of our nuts come from right here in Virginia,” says Carl, reasoning that there are far too many resources local to Lynchburg not to take those gifts and make them shine.

It’s that respect of the land and celebration of the unique that makes Altus tie in seamlessly as a stop along the Jefferson Heritage Trail, a network of wineries, distilleries, restaurants, breweries, museums, antique markets, cultural centers, bed and breakfasts, nature trails, and endless other local attractions that trace the length of the Blue Ridge Mountains along Route 29. Each of these Virginia-grown outposts is a veneration of the local culture and the remarkable ways that Virginia is a place unlike any other—and Altus has become a proud part of that, often holding pairing classes and tastings featuring local wines from Ankida Ridge Vineyards, Lazy Days Winery, Fincastle Vineyard & Winery, and Afton Mountain Vineyards.

We have such beautiful wines here, and they pair amazingly well with chocolate—foods and beverages that have varieties with different flavor profiles are often really complimentary to the various notes in chocolates,” Carl explains. “Cheeses, coffees, breads, and wines—they all have complexities that play off the complexities in the flavors of chocolate.

It’s absolutely apparent in listening to Carl that he and Mary know their stuff. The level of expertise is evident in everything, and that expertise has only made their appreciation for their craft go deeper—and with good reason. “When you’ve had that hands-on experience of making your own chocolate and the quality you can achieve in doing that, it completely changes your perspective,” he says. And as one might well expect, he and Mary now much prefer dark chocolate to its milky counterpart.

Fortunately for the chocoholics of the world, dark chocolate is now considered a super-food, as it contains flavonoids and antioxidants that make this tempting treat a little less… shall we say indulgent? And playing up the health-factor is their Chocolate Nature Truffle, Mary’s personal favorite and a product inspired by a diabetic friend. “We wanted to offer something that was diabetic- friendly, so we did some research and found out that we could use dates instead of sweeteners. We made a truffle with dates and 100 percent chocolate, unsweetened coconut, nuts, and chia seeds. It’s a very healthy, kind of super-food truffle—no sugar, no dairy, and incredibly delicious.”

Not that anything bearing the Altus name isn’t incredible—or delicious. It’s a credit to the company and the very reason behind their growing popularity. So great has their growth been, in fact, that a second Lounge opened in early 2017, treating the good people of Roanoke to all that Altus has to offer. “It’s been amazing to see how successful we’ve been there already,” Carl says.

Amazing, perhaps, but no mystery, as Carl and Mary have found the secret to casting a spell of their own—and there’s magic in every last bite.