I first met Jo Smith when she was making her rounds as a newcomer in the world of country music, sometime around 2010. She stopped by our little radio station with a jar of peaches as a thank you for having her in studio. We all assumed the peaches were from Georgia since she was born there but come to find out, about a minute into our interview, she picked them up in Clanton, AL on her way to the radio station. This is Jo Smith. As sweet and honest as they come, and having kept in touch with her since that day, I can assure you that innocence hasn’t faded one bit.

Originally introduced to the country music listener as Joanna Smith, she is once again poised for a shot at success with a guitar case full of sultry country soul and a voice as pristine as a newly budding magnolia flower.

While growing up in the small town of Crestview Unincorporated, Georgia, Smith drew influence from an array of artists such as Aretha Franklin, The Judds, Keith Whitley, James Taylor, Patty Loveless, and Bill Withers.

“I’ve been singing as long as I can remember,” recalls Smith. “There’s an old VHS tape of me singing a solo in church when I was three. I took a few years off when I was nine to 11 years old and decided I wanted to be an astronaut, but when I hit adolescence and the Dixie Chicks came out, I was back on being a singer 100 percent.”

After leaving Auburn University in August of 2004, Smith headed to Nashville to pursue her dreams of becoming a country music singer. Once settled in the Music City, she joined the band Mustang Sally and quickly started to make a name for herself in the historic night clubs in and around the city’s famed Lower Broadway.

“My only contact in Nashville at the time was Luke Bryan, who I knew growing up in Georgia,” Smith explains. “His grandad sold us vacuum cleaners, and Luke would come over and go fishing with my dad. Luke got me a job working for his girlfriend at the time, and encouraged me to follow the same path he was following: writing songs. I did, and a year later landed my first publishing deal. I was then able to focus on writing and finding my own unique voice.”

2010 saw the release of her first single “Gettin’ Married” on the RCA Nashville imprint and led to her hitting the road to play shows with heavy hitters like Miranda Lambert, Blake Shelton, Chris Young, Dierks Bentley, and others. As quick as the rise to country music stardom happened, so did the fall. In 2013, while dealing with her own personal struggles, Smith was dropped from her record label. It was then that she says she started to consider leaving her singing career behind.

“I questioned everything about myself, my dreams, my purpose in life. But I found my way home,” said Smith.

Part of that life change involved dropping a few letters from her name to become Jo Smith. Then after many nights of sitting at home on the floor writing songs, she discovered a sound that she thinks fits the woman she’s become perfectly. No longer a contemporary country artist, Smith now brings in more of the Motown influences she had growing up.

“It was described by someone recently as countrypolitan,” says Smith. “I like that. I am, and always will be a country girl who grew up on a farm. But my influences were as deep and wide as my Daddy’s enormous vinyl collection.” 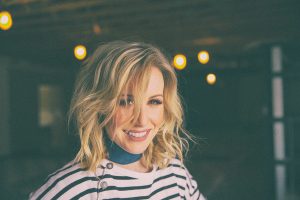 Introducing Jo Smith, produced by Shane McAnally (Kasey Musgraves, Sam Hunt) and Jesse Frasure (Thomas Rhett), was released in October of 2016. The four songs showcased on the EP perfectly combine modern country and classic R&B soul. Just as one would pair food with wine, Smith’s latest offering is best served up with a quiet evening around the house or a random road trip with someone you love. The innocence delivered vocally by Smith sets the tone by giving each track a certain laid-back, romantic sound.

Recently named an “Artist You Need to Know” by Rolling Stone Country, Smith was also the very first female Highway Find on SiriusXM’s “The Highway” and had the video for Old School Groove premiere on CMT.

When asked about how her established fan base has taken to the newly revamped style, Smith said, “Well, after changing my name I’m not sure many people are making the link between the old and new, but the new fans are so enthusiastic and supportive. Motown never gets old, and to have that influence combined with country lyrics, to me, is the best of both worlds. It is resonating across all demographics, which was my hope.”

From the big stage to the small stage and back again, Jo Smith has seen all sides of the country music business in Nashville and has remained as humble as she was raised. Her dreams for the future involve continued touring and making a difference in the world.

“I would love to find bigger and better ways to use the platform afforded me by my music to help people as well, in a philanthropic or humanitarian sense,” she explains, “I want to continue to engage the creative community and make more of this music.”