Greenwood, Mississippi may not be the first town that comes to mind when planning a trip to please anyone from blues aficionados to pop culture fanatics or even a destination for foodies, but twenty-four hours in this diverse Delta town will change all that. Think lounges with custom cocktails, shops that still know the meaning of customer service, laid back porch sitting on the banks of the Tallahatchie River and views of endless stars that may well be worth the whole trip. Give the people of Greenwood the chance to roll out the red carpet, and you’ll be begging to come back for more.

The Mississippi River flood plain has long been a region feeding off the Mississippi and its numerous tributaries. Before Europeans came to the Americas, the Choctaw and Chickasaw Indian nations settled in the Delta’s marsh and swampland. In 1830, a treaty was signed by Choctaw Chief Greenwood Leflore, the last Great Chief of the Choctaw Nation in Mississippi, opening the swampland to settlers.

The first settlement on the banks of the Yazoo River was a trading post founded by John Williams in 1830, and known as Williams Landing. The settlement quickly grew, and in 1844, was incorporated as Greenwood, named after Chief Greenwood Leflore. Growing into a strong cotton market, the key to the city’s success was based on its strategic location in the heart of the Delta. The city prospered as a shipping point to New Orleans, Memphis, and St. Louis, Missouri until the latter part of the Civil War.

However, the end of the war and the following years of reconstruction severely diminished the cotton industry and crippled the city’s thriving economy. But with the arrival of railroads in the 1880s, the city, once again, became a prime shipping point for cotton. Downtown’s Front Street, bordering the Yazoo, bustled with cotton related businesses, earning that section the name Cotton Row. The city continued to prosper well into the 1940s, although cotton production suffered during the infestation of the boll weevil in the early 20th century. For many years, the bridge over the Yazoo displayed the sign, “World’s Largest Inland Long Staple Cotton Market”. Since the late 20th century, some Mississippi farmers have begun to replace cotton with corn and soybeans; they can get better prices for the newer crops, used mostly as animal feed. 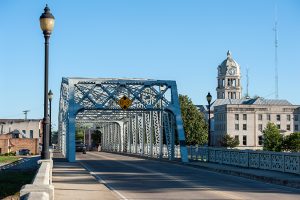 Found within the district are beautiful examples of Spanish Eclectic, Tudor, Prairie Style, Neo-Classical and Greek revival architecture, reflecting the prosperity of the city, as it became the Center of Mississippi’s second cotton kingdom. The neighborhood stretches north to the Tallahatchie River, with views beyond of the cotton fields of Delta plantations. The neighborhood was a planned residential subdivision developed by Captain and Mrs. Samuel L. Gwin, who purchased the land in the late 1890’s. Mrs. Gwin, a charter member of the Greenwood Garden Club, planted the 1,000 oak trees lining Grand Boulevard. Nestled among these grand homes is the home used as the residence of Hilly Holbrook in the hit movie, The Help. So many people are in search of the locations used in the movie that free maps can be found around town with at least sixteen sites found around Greenwood. 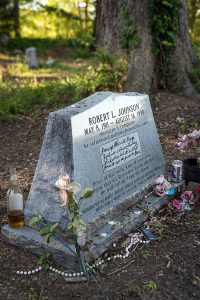 Blues enthusiasts will find Greenwood an important stop along the Mississippi Blues Trail with eight markers of importance placed around town. Baptist Town, one of Greenwood’s oldest African-American neighborhoods is thought by many to be the last residence of Robert Johnson, whose gravesite is just outside of town. A museum housed in the old Hoover Grocery details the history of the area and houses photos and artifacts collected over the years.

For the full Delta blues experience, look no further than Tallahatchie Flats. Located just three miles north of Greenwood on the banks of the Tallahatchie River, made famous by Bobbie Gentry in Ode to Billie Joe, guests can rest their bones in “shacks” that are akin to those that many of the iconic bluesmen called home. Tallahatchie Flats boasts that perhaps one of these shacks might have held Robert Johnson when he took his last breath. While that may not be entirely true, the experience is one not to be missed.

Sunday nights, in the 1940’s, found Delta native, B. B, King performing live gospel music as part of a quartet at radio station WGRM located on Howard Street. In memory of King’s first live broadcast performed here, the Mississippi Blues Trail has placed its third historic marker in this town at the site of the former radio station.  Blues has always been a large part of this area and each March the Blues Music Festival is held at the Leflore County Civic Center honoring those bluesmen that paved the way.

In 1989 Fred Carl, Jr, founder and CEO of Viking Range, opened the company’s manufacturing and headquarters in Greenwood, giving it a long awaited economic boost. The downtown area was further revitalized when the Alluvian Hotel opened its doors in 2005, in the old Hotel Irving. Check in and linger with a Gin Blossom cocktail in the lounge or courtyard before dinner at adjacent Giardina’s. Originally opened in 1936, Giardina’s serves classic Southern dishes. Not to be missed is their Cajun shrimp and grits or Baked Oysters Giardina with Benton’s Bacon. 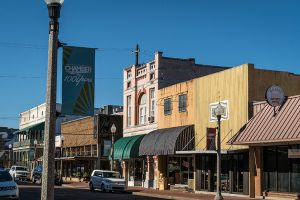 Other downtown ventures have flourished in the blocks surrounding the Alluvian, since its opening, The historic downtown boasts dozens of completed renovations with several others in progress. including museums, boutique retail stores, a book store, art galleries, restaurants, a spa and antique stores, among others. Stop in and meet the locals while perusing the latest bestsellers and a variety of Mississippi authors at Turnrow Book Co. Grab a coffee or tea and sit down with your literary finds. Also, check out the posted schedule online or in the store for book signings and readings. You never know whom you might find in this local treasure.

One of Greenwood’s legendary shopping experiences can be found at Ola’s Shoes. This downtown store renowned for its customer service, has been serving the community since 1953. Owner, Anthony Ola is in the midst of waiting on one of his regular customers. Bringing out box after box until he found just the right fit. The customer, having just recovered from knee surgery, would not trust her need for a stylish yet stable pair of shoes to anyone else. Having been in business in downtown Greenwood for over sixty years, Anthony says his family takes care of customers from their childhood sneakers to their wedding high heels. “It’s all about the customer. Being in a small town like Greenwood, I really get to know them. I have kids coming in with parents that have been customers since they were little.” It is worth a stop on any shopping excursion. 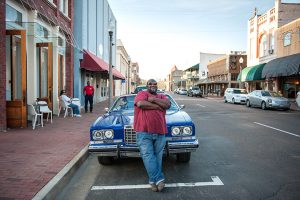 Sign up for a class at the world-renowned Viking Cooking School and improve your cooking skills. Delta native, Katherine Pannel, was recently surprised by her husband with the gift of a class, and after being a bit apprehensive about driving two hours to cook her own food, she relished in the opportunity to learn new kitchen skills, meet new friends and, of course, eat fabulous food. There are a variety of classes offered, including one featuring the dishes made famous in The Help.

A stop at any local farmer’s market is always in order. This year the Greenwood market will be housed under the brand new Rail Spike Park pavilion, designed by local architecture firm, Beard & Riser. The pavilion is the anchor for a linear park at the far end of Main Street, which also boasts a walking trail, which is also a great spot to take a few laps and get ready for a hearty Delta meal. 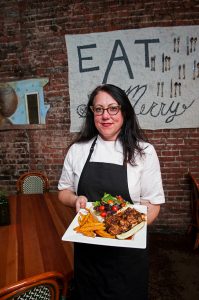 Take in the food and atmosphere at Lusco’s, in its fifth generation of family ownership, as well as the legacy of the mile high meringue on the pies at the Crystal Grill. Newer on the block but not to be missed are Delta Bistropub and the popular lunch spot, Fan and Johnny’s, named for owner Taylor Rickett’s grandparents, has been a hot spot for lunch since July of 2016. While not her first foray into the culinary scene of Greenwood, this new restaurant has given Rickett a chance to source more local Delta and Mississippi goods. She relishes in this opportunity to be in her words, “closer to the earth” while still being a part of the vibrant downtown lunch crunch. “Mississippi has always been home. I’ve lived in the Jackson area and Oxford, but in Greenwood, I have really found my creative side. I have been able to get back to the earth with Fan and Johnny’s, and our customer’s have responded well.” Most evenings are for special events and local happenings, but Friday only dinner service will began in June.

With generations of children returning to run family businesses, locals work to keep alive the rich history that still weaves its way through the city like the rivers that converge here. Born and raised in Greenwood, Gwen Pickett left for a teaching job on the coast after college at Delta State. It only took two years for her to return to Greenwood where she runs more than one local business. The real star of the show in Greenwood is the community itself. As Pickett stated, “It’s like we’re all family.” All the while, Greenwood has retained its small-town beauty, Delta personality, and deep-South hospitality. You can feel that family vibe all over, and the people of Greenwood want you to be a part of it. too.