okra. had the great pleasure to chat with Deborah Malone, author of the Trixie Montgomery Cozy Mystery books set in towns around the South. With the recent introduction of a new series and heroine, Skye Southerland, she now takes on Atlanta. We’re certain you will love her as much as we do.

Q : Deborah, we know you are busy so we just want to say thank you so much for your time. Tell us about Deborah Malone. Were you born in the South? Did you read a lot growing up? How did you become who you are today? Did you always want to be an author?

A : Oh, boy! I could write a book on these questions alone. Yes, I was born in the South (Floyd County, Rome, GA), but just barely. If my dad hadn’t been transferred to Rome to work at the newly opened General Electric plant I would have been a Yankee. Dad was from Opelika, AL. He moved to Cincinnati, OH where his brother was 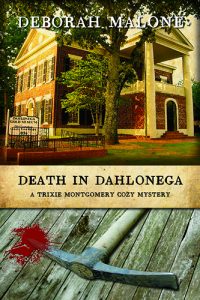 living and went to work for General Electric where Uncle Don worked. He met and married my mother while he lived there. My two brothers were born in Cincinnati then my dad was transferred and I was born a year later. I always believed my dad asked for the transfer and that he longed for the farm. I remember having chickens, a pig and a donkey while growing up. I always say I believed I came out of the womb reading. I can’t remember a time when I didn’t love to read. Mother had rheumatoid arthritis and I had a lot of responsibility growing up so reading took me away from that responsibility for a while. My life hasn’t always been easy – I’ve had many challenges along the way, but the one thing that kept me going was holding on to my dreams. I returned to college as an adult and graduated with a BS in Human Services at the age of 45. While I was in college I took a creative writing class that sparked a flame in me to write. I bought an old computer (DOS operating system) which I named Dino, and began to write short stories and poems. It would be years later before my first book was published, but what I like for people or other aspiring authors to know is that you can work on your dreams while you are amid life’s challenges. Even if it’s baby steps – those steps will take you in the right direction. “A journey of a thousand miles begins with a step.” I remember as a child thinking about writing stories. I think my love of reading paved the way for me to write.

Q : What led up to this series of books? What were you writing before breaking out with them?

A : Great question. I had already been writing short stories when I started dating my now husband, Travis. We hadn’t been dating long when we visited a restaurant in a neighboring town. It was in an old tavern – Riegeldale Tavern in Trion Georgia. The architecture was beautiful and we also discovered it held historical significance. I suggested to Travis that someone should write a story for a historical magazine that Travis and I both enjoyed reading. He said, “Why don’t you?” And I said, “Okay, I will.” To make a long story short I wrote the article and the editor of the then “North Georgia Journal,” and now “Georgia Backroads,” accepted the article. I was on cloud nine. That was until I went back to get more information from the owner at the time and her husband told me she had run off with the cook over the weekend. And yes, this did happen. The article wasn’t published, but I went on to write my first published magazine article, “Chasing the General,” which was published in 2001. I’ve been writing for them since. I had been writing for “Georgia Backroads,” a while when I decided I wanted to write a novel. I chose Dahlonega, GA a gold mining town in the NW Georgia mountains because I had fallen in love with the quaint town while working on an article. I wanted to make the setting as real as possible and because of my love for history I wove local facts throughout the book. I finished this book and part of the second book in the series, but then life got in the way and I wouldn’t work on the novels again until 2009. I took out the manuscripts, blew off the dust and worked on them for a couple of years. During this time, I had joined an on-line writer’s group and was learning everything I could about the craft of writing. I submitted my book to several publishers and Lamp Post Publishing of California offered me a contract and my first book in the Trixie Montgomery Cozy Mystery Series, “Death in Dahlonega,” was published in 2011.

Q : Can you briefly describe your cozy mystery books?

A : First, let me describe what a cozy mystery is. A cozy mystery is usually light and has some humor. The murder happens off stage so it isn’t gory (maybe just a little blood). The sleuth is an amateur – someone just like you or me and is usually set in a small town or village. My books are set in historical/tourist towns of Georgia/ Tennessee. The settings are real so the reader will be able to identify the roads, buildings, landmarks and especially the restaurants if they are familiar with the area. And if they aren’t then they can go and visit these places – which I’ve had my readers tell me they loaded up in the car and took off to visit a location/restaurant in the book. In the Trixie Montgomery series, Trixie works for a Georgia magazine and her boss, Harry, sends her on assignments that usually turn into more than just another story. In the Skye Southerland Series, Skye, is an interior decorator and her husband is an antiques dealer. This series follows the pattern of having real settings.

Q : What kind of research do you do for your books?

A : Oh, the research is the fun part. I will visit the locations and take hundreds of pictures, talk to local people and collect information from visitor centers. I have also discovered that information online is also very helpful.

Q : You’ve received positive feedback about your books being set in the South, which is also where you live. How important is it for your stories to take place there?

A : Very important! I love all things Southern. Being that I was raised in the South – that is what I know. Most authors write what they know and what they are familiar with.

Q : Do you use moments from your life to spark book ideas?

A : Isn’t that kind of personal? Just kidding. I sure do! Especially in the Trixie Montgomery series. Anyone who knows me will see some of me in Trixie. Dee Dee, her friend, is fashioned after a couple of my friends, that is, with their permission. Some of the scenes in the books actually happened. Not so much in the Skye Southerland series.

Q : Trixie is both funny and inspiring. Can you tell me about your inspiration for her?

A : That’s exactly how I wanted to portray Trixie. I love her humor because we all need to laugh. I hope that my books will bring some out loud laughter from my readers after a hard or challenging day. I’m glad you found her inspiring. I gave Trixie flaws because I wanted my readers to be able to relate to her – and we all have flaws. I heard a quote one time, “Life is too serious to be taken seriously.”

Q : Your latest book features a new heroine, Skye Southerland? What can you tell us about her? And can we look forward to more Skye books?

A : I guess you could say Skye is a little more sophisticated than Trixie. Skye is married and owns her own business and lives in the heart of Atlanta. It was hard leaving behind Trixie and Dee Dee and moving on to Skye and Honey. The characters become your friends so it felt like I was deserting them. I wanted Skye to be different from Trixie so I had to develop a whole new character. I’m now as close to Skye and Honey as I was to Trixie and Dee Dee. And yes, the second book in the Skye Southerland series, Decatur Dead, is out.

Q : You also speak on writing and marketing as a writer. Best piece(s) of writing advice we haven’t discussed yet?

A : As far as writing: attend conferences, writing workshops, and read books on writing as well as books in the genre you want to write. Then get it down on paper. Remember, if you write one page a day you will have a book in a year or less. As Stephen King says, “Write, write, write!” The one piece of advice I like to give on marketing is to market with confidence. Most people don’t feel comfortable putting themselves in the limelight. But what I try to get across to authors is that you are not selling yourself, you are not selling your name, you are selling a product that you’ve worked long and hard on and that will enhance someone’s life.

Q : Something personal about you people may be surprised to know?

A : My first book was published when I was 57. I tell this because I want other aspiring authors to know that it’s never too late. Don’t give up your dream because it didn’t happen when you were in your 20’s or 30’s. Hey, I’m 62 now and I’m just warming up!

Q : What are you working on now?

A : I’m working on the third book in the Skye Southerland Cozy Mystery Series, “Suwanne Dead.” And yes, there is a Suwanne, GA. After I finish this book, the last in the series, I want to finish a book I started about strong Southern women in historical times.

Q : Do you have any interesting writing habits?

Q : Who are your favorite authors? And what have you read this year that inspired you or brought you just pure joy?

A : I don’t think I have any favorite authors, but Anne George, from Birmingham, AL was an inspiration to me. She was a great cozy mystery author. I’ve read so many books I’ve kind of lost track of them, but I recently met an author at a writer’s conference who had written a book about the archaeological discoveries that line up with the Bible. She set out to research these discoveries and write the book in a format that a young adult could understand. Turns out I could understand it, too. It is chock full of interesting facts and full of color photos. Her name is Jan Sessions and her book is, “Fables Don’t Leave Footprints.”

Malone’s books can be found on amazon.com and at deborah-malone.com