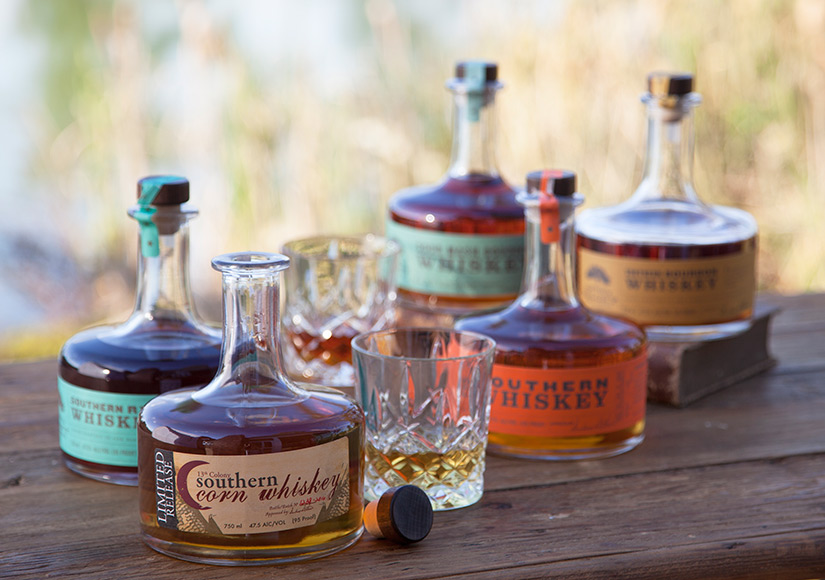 Atown of not quite 18,000 folks, Americus, GA is home to the operations base for Habitat for Humanity, holds history in beautiful and majestic homes on tree-lined streets and houses a growing international coffee company that gives back to the community. But, to the careful observer of small towns, Americus is also home to an award-winning distillery: Thirteenth Colony.

Born in 2007 after a group of friends – Alton Darby, Kent Cost, Dr. Gil Klemann and Winford Hines – started talking about making moonshine to give each other “better” Christmas gifts, Thirteenth Colony is a small batch, handcrafted distillery producing whiskies, vodkas and gin.

Based inside an old mattress factory, the feeling among the employees is relaxed and comfortable and encourages the small staff to bring their dogs to work, if they have a mind to. Former chef and head distiller, Graham Arthur says he often brings his dog, “Bacon” to work and so do the other people in the office.

Thinking back, Arthur reflects that at about the five year mark he had made “about 10,000 cases” of liquor, and as he looks on with pride he adds: “I’ve touched every bottle that’s come in and out of this building.”

Thirteenth Colony (named for Georgia being the thirteenth American colony) uses aged oak barrels mostly from Kentucky for aging their potent liquids. The first spirit produced was Plantation Vodka in 2009 and since then, they’ve grown to making eight different alcohols. Made in small batches, the handcrafted spirits of Thirteenth Colony use their location to advantage as the distillery sits atop one of the South’s oldest and deepest aquifers. With water this pure, it is perfect for making high-quality spirits. Also used in the distillation process are locally grown corn, barley and rye, which is carried out in a custom-designed, 250-gallon still.

Having won numerous awards over the years, Kent Cost, President of Thirteenth Colony, says the craft distillery “was founded with the goal of providing unique, high quality distilled spirits and will continue to pursue that goal into the future. Our goal is not to be the largest but to make the very best spirits.”