“How’d y’all find this place?” is a common question asked among blues fans at Gip’s Place. Most people say they came with a friend who had been there before. You hear Gip’s before you ever see it. Tucked away behind a house, about 20 miles outside of Birmingham, there is no sigh and a bunch of lights hang randomly around the place, but once you find it, the stress of getting there melts away.

Henry “Gip” Gipson, as he is called by friends and family, has been holding his backyard Saturday night parties in a residential neighborhood of Bessemer, Alabama, since 1952. A musician and devout blues fan, he decided to open his home to other musicians and entertain friends and family on the weekend. Now, at the age of 94 (give or take a few years, no one really knows) he’s still hosting anywhere from a dozen to a couple hundred music lovers each Saturday night.

I can’t run a business, but no one can stop me from having a party in my own backyard.” Gipson says.

Over the years, he has been closed by the Bessemer Police, and warned by the city attorney that he can keep his party going as long as he doesn’t run a business. This means no selling liquor, food, or T-shirts, and it’s a complicated game that’s been going on since the beginning, but being a local legend, Gip’s Place stays open. It’s strictly BYOB. 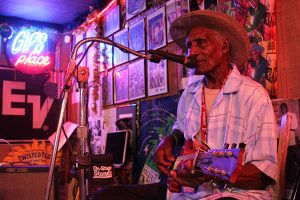 When Gipson first started, the party was held in a tent in his backyard. Now there is the tin-roof garage and a few sheds, but it still retains a ramshackle down-home feeling. In warmer weather, the crowd usually spills out into the side yard; the clear plastic sections covering the openings are taken down to allow a few more people to get in on the party. Warm weather is a great time to be at Gip’s Place; picnic tables, lawn chairs, coolers and grills are scattered around. Any number of grill-masters can be found cooking up some of the best fried chicken and catfish around.

A blues lover’s dream: Gip’s Place is a honest-to-goodness juke joint, and one of a very few still existing in the South.

Juke joint is the term used for an informal establishment featuring music, dancing and drinking, primarily operated by African American people in the South. The term “juke” is believed to derive from the Gullah word joog or jug, meaning rowdy or disorderly. While Gip’s Place features music, dancing and drinking, rowdiness will not be tolerated. Every night starts with a prayer followed by the rules: no drugs, no profanity, and every man must leave with the woman he came with. Holding strong to these rules has kept away the bad element for 65 years, and the place has a perfect record of trouble free Saturday nights to prove it. Crowds have increased in recent years, as more people from outside the neighborhood (and around the world) have discovered Gip’s. And that’s fine with Gipson.

Juke joints are where blues musicians honed their skills. If they hadn’t done this, blues music may never have developed the importance it holds today. They gave African Americans a place to go to on the weekends to relax and enjoy the music. One of the most famous is Po’ Monkey’s in Merigold, Mississippi. Sadly, Willie Seaberry, the owner of Po’ Monkey’s passed away in September of 2016. The fate of Po’ Monkey’s remains to be seen, but it certainly won’t be the same without the welcoming presence of Mr. Seaberry. To many blues lovers this now marks Gip’s Place as the last true surviving juke joint.

Regulars describe going to Gip’s more like going to your best friend’s house, putting on a record and sitting there listening to it together than going to a club. At Gip’s there are no social or racial barriers. Once you step inside, you’re part of the family; “We don’t have no colors here,” Gipson says. “There’s no black and white.” It’s all about people getting together and having a good time, no matter what.

Inside, the walls are covered with overlapping posters of old blues musicians and events from around the South. “I love old blues: John Lee Hooker, Muddy Waters, Lightnin’ Hopkins,” Gipson says. “These are my type of blues that I love, and I can’t get them out of my head.” On this particular night fans are shoulder-to-shoulder listening to the Russell Gulley Band, but there is still room right in front of the stage to dance. A few tables line the back of the floor to accommodate food and drinks. 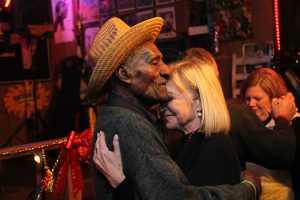 Gipson still likes to dance and usually finds the prettiest girls to take a turn around the floor with. He wanders around chatting with people or just sits listening to the music while people come over to visit with him.

The highlight of the night seems to be when the band takes a break and Gipson is persuaded to grace the stage. Sitting off to the side in a chair, he picks up his Gibson guitar and plays and sings old-time blues, much like the recordings of his heroes. 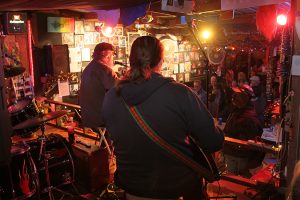 Described by those who know him well as a walking contradiction; Gipson will drink whiskey and stay up dancing ‘til all hours of the morning … yet he’s very religious. He is a gravedigger by day (still digging graves with a shovel) and now owns his own cemetery. In his early years, Gipson was a part-time musician with aspirations of greatness, but after a man broke the fingers in his hand, he had to give up playing the guitar for many years. It was around this time he decided to start his parties.

Chuck Berry once gave him a guitar, and Keith Richards has played there unannounced. So, too, have Jimmy Page and Robert Plant. Some pretty legendary bluesmen, Kenny Brown, Sam Lay, Cedric Burnside & Lightning Malcolm, and T-Model Ford are just a few of the names that have played here. But while Gipson is proud of all these people who have graced his stage, he is most proud that younger players are offered an opportunity to sit in and play with the pros. “How are they going to get better if we don’t get them up with the good guys and get them enthusiastic enough to go home and practice?”

Whether it’s a group of local musicians, or a visit from someone more famous, at Gip’s Place you never know who might show up on stage. So if you are after an authentic blues experience, follow the music as it leads you deep into the backyard of a neighborhood in Alabama. What you find will surprise you. And tell someone else how you got there.